CAPE TOWN, South Africa - The goal is to get soccer balls to 700 million elementary school children, most of them in the poorest or most remote corners of the world.

India alone needs 1 million balls, which will likely have to travel the length and breadth of the country by road to reach kids at about 10,000 schools.

"Can you imagine China?" said Fatimata Sow Sidibe, the director of FIFA's Football For Schools project.

Overshadowed by the buildup to the World Cup, soccer has embarked on probably its most ambitious global youth development program, with the monumental aim of delivering balls and a coaching program to nearly half of the world's children between the ages of 4 and 14.

Football For Schools was launched in 2019 but came to a grinding halt because of the COVID-19 pandemic. It was relaunched this year and has an initial budget of $100 million from FIFA, about 1% of what Qatar reportedly spent just on its stadiums for this year's World Cup.

And yet, "this is the most important project in the world of football," said Steve Pila, who is managing the Football For Schools rollout in South Africa, one of the pilot countries.

Football For Schools aims to send 11 million Adidas soccer balls to tens of thousands of schools, by air, sea and road. Schools will also get access to training routines via a free cellphone app. That changes the game because it allows any teacher to coach with the help of dozens of practice sessions designed for kids and available at the tap of a finger.

Many schools aren't just short of balls. They also don’t have a dedicated soccer coach. 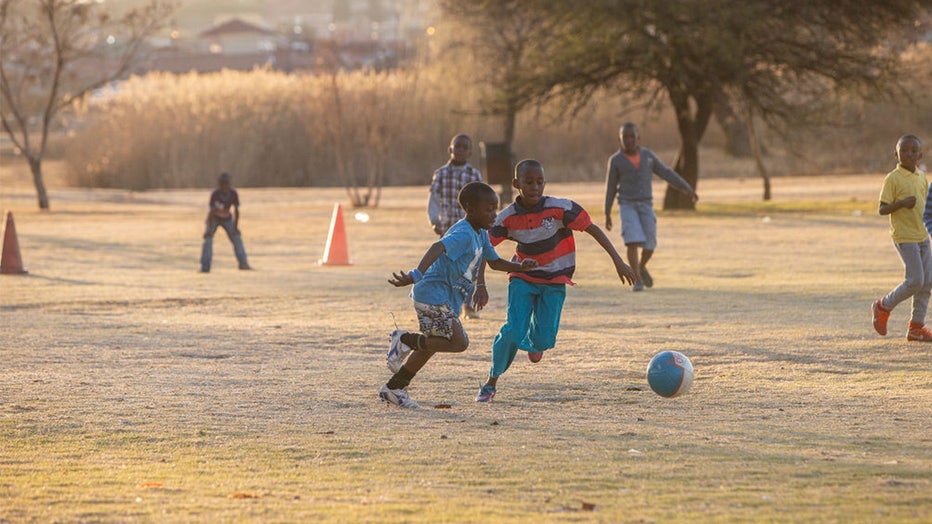 "Even a teacher in the most rural area is able to take young boys and girls together and, at the palm of your hand, you have something to do with them," Pila said.

Pila said South Africa's biggest problem is not enough good coaches and this "fills that gap just a little."

Development programs are difficult to judge, especially when targeting such young kids. Any results are long-term and sometimes intangible. Football For Schools is unlikely to have a noticeable impact on the world game by the time the next World Cup in the United States, Canada and Mexico comes and goes, or even the one after that. It's a 5-10-year project at least.

"Nobody is investing in this because there is no immediate return of investment," Sow Sidibe said.

But youth programs are priceless. All indications are that the world's best players, the driving force of the game and the focus of the $200 billion World Cup in Qatar, become the best because they had regular exposure to soccer before the age of 10. Lionel Messi was playing at a club in Argentina at the age of 4, way before Barcelona came calling. Cristiano Ronaldo was in a youth team on the Portuguese island of Madeira at 7.

FIFA believes there are more than half a billion willing young children out there who still don't have enough contact with the world's most popular game.

"We are spreading the net now," said Mzimkhulu Fina, the chairman of schools soccer at the South African Football Association.

Poor regions are the focus. So far, Football For Schools has launched in 18 countries, most of them in Africa, South America, Central America and Oceania. The Caribbean is next. India is a big target for next year, where the project hopes to allow 1.8 million more Indian children to kick a soccer ball, Sow Sidibe said.

She hopes that all 211 member countries of FIFA will eventually take it on.

Africa is especially rich in potential, with more than 400 million children aged 10 or younger growing up on a continent where soccer has no equal as a sport. It also has some of the steepest challenges; poverty but also the remoteness of rural areas where talent scouts aren't dropping by to whisk promising players off to academies.

The backstory of Sadio Mané, the Bayern Munich forward from Senegal who is one of the best players in the world, encapsulates Africa. Born in the village of Bambali in southern Senegal, soccer didn't come to Mané. He had to go find it. He left home as a teenager for the capital, Dakar, in the hope of making it. He did but "so many are missed," Pila said.

"We have good young players in Africa, but if they are not surrounded by all they need to be among the top ... it’s going to be difficult," said Yaya Touré, a former Ivory Coast midfielder who played for Barcelona and Manchester City.

Football For Schools has another vital component, said Pila, who previously was the head of one of South Africa's top academies and is proud to have discovered Steven Pienaar, who became a South Africa international.

The app combines soccer with a life skills program developed through a partnership with UNESCO, the United Nations education agency. And by putting soccer programs in more schools, you keep more young players there, going to class and getting an education.

Pila said it's as critical as ever that youngsters understand they'll need more than their soccer skills in life because they may not make it as professional players. And even if they do, they won't play forever.

"You know football is not long-lived," Pila said. "You play it as long as you are under 35. Unless you are Cristiano Ronaldo."