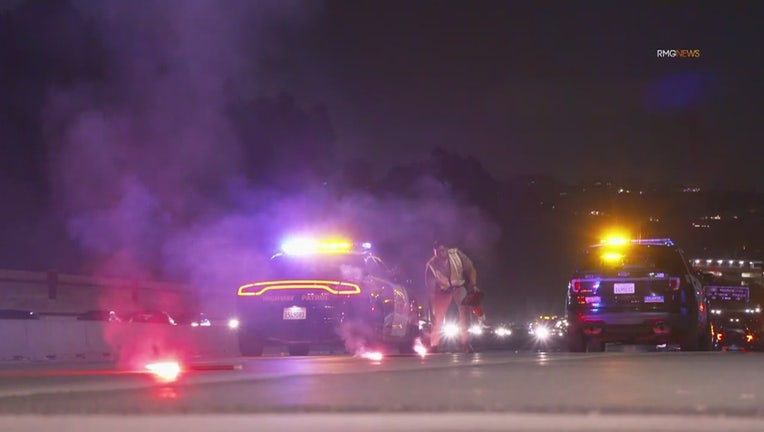 The pursuit began when officers with the Los Angeles Police Department attempted to stop a Toyota sedan they suspected may have been stolen in Pacoima around 10:30 p.m. The driver did not stop and a chase ensued through the streets of Pacoima, then onto the southbound lanes of the 405 Freeway and ending in Van Nuys with a dramatic crash involving another vehicle.

Teens ejected from vehicle in pursuit through the San Fernando Valley

Five teenagers were injured during a pursuit in the San Fernando Valley. The pursuit ended in a horrific crash in Van Nuys.

At least two teens between the ages of 14 and 16 were ejected from the suspect's vehicle after colliding with another vehicle and spinning out of control across lanes of the freeway before hitting a post on the shoulder. Officials do not believe the teens were wearing seatbelts at the time of the crash.

Two other people, including the 18-year-old driver, were detained by authorities following a brief foot pursuit following the crash.

A loaded gun was found inside the car and the driver is a documented gang member, LAPD said.

Police said they believed the vehicle may have been stolen due to its paper plates. The investigation later revealed the car belonged to one of the teen's parents and that the car was apparently taken with permission, according to authorities.

All five teens were taken to a local hospital. The suspect was treated and released. He was then arrested for felony evading.

One of the teens suffered a fractured skull and is currently in critical condition, officials said.

Authorities say the other teens remain hospitalized with various injuries but are stable.