A New York nurse is believed to be the first U.S. health care worker to receive the coronavirus vaccine as the rollout begins nationwide.

NEW YORK - Health care workers around the country rolled up their sleeves for the first COVID-19 shots Monday as hope that an all-out vaccination effort can defeat the coronavirus smacked up against the heartbreaking reality of 300,000 U.S. deaths.

“Relieved,” proclaimed critical care nurse Sandra Lindsay after becoming one of the first to be inoculated at Long Island Jewish Medical Center in New York. “I feel like healing is coming.” 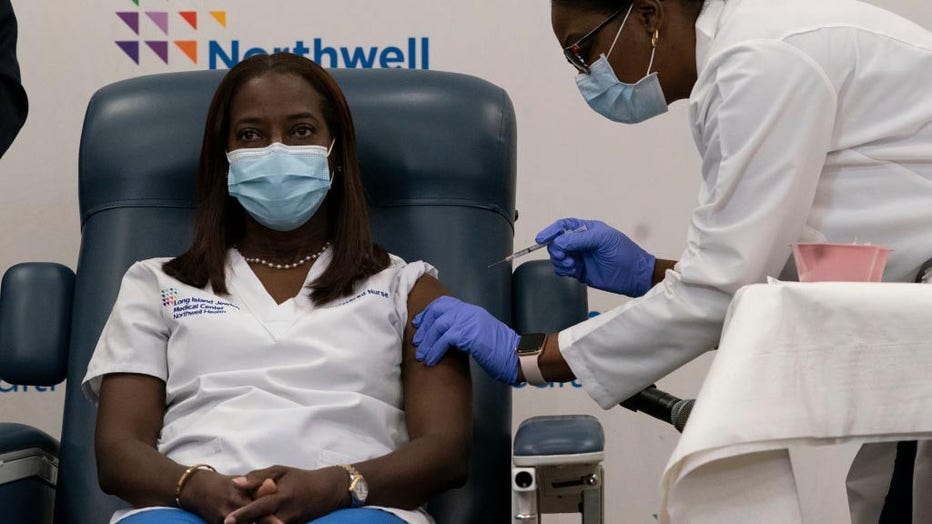 And in Colorado, Gov. Jared Polis personally opened a delivery door to the FedEx driver and signed for a package holding 975 precious frozen doses of vaccine made by Pfizer Inc. and its German partner BioNTech.

The shots kicked off what will become the largest vaccination effort in U.S. history, one that could finally conquer the outbreak.

Dr. Valerie Briones-Pryor, who has worked in a COVID-19 unit at University of Louisville Hospital since March and recently lost her 27th patient to the virus, was among the first recipients.

Some 145 sites around the country, from Rhode Island to Alaska, received shipments, with more deliveries set for the coming days. High-risk health care workers were first in line.

“This is 20,000 doses of hope,” John Couris, president and chief executive of Tampa General Hospital said of the first delivery.

Nursing home residents also get priority, and a Veterans Affairs Medical Center in Bedford, Massachusetts, announced via Twitter that its first dose went to a 96-year-old World War II veteran, Margaret Klessens. Other nursing homes around the U.S. expect inoculations in the coming days. 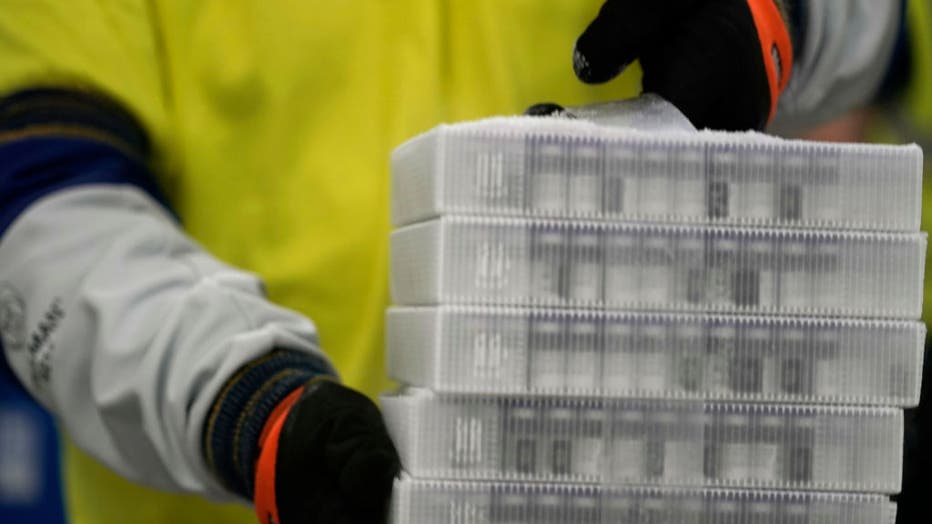 Boxes containing the Pfizer-BioNTech COVID-19 vaccine are prepared to be shipped at the Pfizer Global Supply Kalamazoo manufacturing plant on Dec. 13, 2020 in Portage, Michigan. (Photo by Morry Gash - Pool/Getty Images)

The campaign began the same day the U.S death toll from the surging outbreak crossed the 300,000 threshold, according to the count kept by Johns Hopkins University. The number of dead rivals the population of St. Louis or Pittsburgh. It is more than five times the number of Americans killed in the Vietnam War. It is equal to a 9/11 attack every day for more than 100 days.

“To think, now we can just absorb in our country 3,000 deaths a day as though it were just business as usual. It just represents a moral failing,” said Jennifer Nuzzo, a public health researcher at Johns Hopkins.

Health experts know a wary public is watching the vaccination campaign, especially communities of color that have been hit hard by the pandemic but, because of the nation's legacy of racial health disparities and research abuses against Black people, have doubts about the vaccine.

Getting vaccinated is “a privilege,” said Dr. Leonardo Seoane, chief academic officer at Ochsner Health in suburban New Orleans, after getting his dose. Seoane, who is Cuban American, urged “all of my Hispanic brothers and sisters to do it. It’s OK.”

Trucks carrying the first doses of the coronavirus vaccine left a Pfizer plant in Michigan on Sunday, December 13, to be transported to distribution centers across the US. (Credit: Joshua Neyhart via Storyful)

The nearly 3 million doses now being shipped are just a down payment on the amount needed. More of the Pfizer-BioNTech vaccine will arrive each week. And later this week, the FDA will decide whether to greenlight the world’s second rigorously studied COVID-19 vaccine, made by Moderna Inc.

While the U.S. hopes for enough of both vaccines together to vaccinate 20 million people by the end of the month, and 30 million more in January, there won't be enough for the average person to get a shot until spring.

For now the hurdle is to rapidly get vaccine into the arms of millions, not just doctors and nurses but other at-risk health workers such as janitors and food handlers — and then deliver a second dose three weeks later.

“We’re also in the middle of a surge, and it’s the holidays, and our health care workers have been working at an extraordinary pace,” said Sue Mashni, chief pharmacy officer at Mount Sinai Health System in New York City.

Plus, the shots can cause temporary fever, fatigue and aches as they rev up people's immune systems, forcing hospitals to stagger employee vaccinations.

Just half of Americans say they want to get vaccinated, while about a quarter don’t and the rest are unsure, according to a recent poll by The Associated Press-NORC Center for Public Health Research.

“I know it’s going to be a big hurdle to convince people because it’s new, it’s uncertain,” said intensive care nurse Helen Cordova, who received a vaccination card after getting a shot at Kaiser Permanente Los Angeles Medical Center. “This can be encouraging for others.”

The FDA, considered the world’s strictest medical regulator, said the Pfizer-BioNTech vaccine, which was developed at breakneck speed less than a year after the virus was identified, appears safe and strongly protective, and the agency laid out the data in a daylong public meeting last week for scientists and consumers alike to see.

“We know it works well,” said Ochsner infectious-disease expert Dr. Katherine Baumgarten, who got her shot on Day 1. “As soon as you can get it, please do so.”

Still, the vaccine was cleared for emergency use before a final study in nearly 44,000 people was complete. That research is continuing to try to answer additional questions.

For example, while the vaccine is effective at preventing COVID-19 illness, it is not clear if it will stop the symptomless spread that accounts for half of all cases.

The shots still must be studied in children and during pregnancy. But the American College of Obstetricians and Gynecologists said Sunday that vaccination should not be withheld from pregnant women who otherwise would qualify.