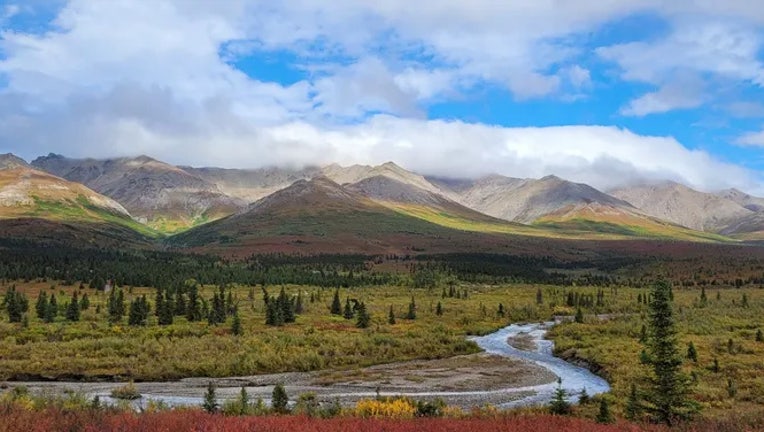 Alaska's official state nickname is "The Last Frontier" but in the category of fall foliage the state is clearly leading the way, with the first changes of leaves already being spotted in northern parts of the state.

Recent photos from the Arctic Circle and areas in the interior show plenty of vibrant colors dotting the landscape.

The start of the annual change in leaves can vary each year, but because of the decrease in the amount of daylight, the foliage season typically begins towards to end of meteorological summer in northern Alaska.

"It's a little earlier than normal, but mid-to-late August is typical for this kind of color change up here in the Arctic. Most of the migratory birds are already gone, and in another few weeks there will probably be snow on the ground," said Seth Beaudreault, a naturalist at the University of Alaska Fairbanks’s Toolik Field Station's Environmental Data Center.

Some leaves have already peaked in color in northern Alaska. (Seth Beaudreault)

Beaudreault said colors in some of the higher elevations have already peaked and are already starting to dull ahead of the first signs of winter.

The region is losing about 9 minutes of daylight every day thanks to the tilt of Earth, which drastically impacts chemical processes in many trees and other vegetation.

The lack of sunlight causes chlorophyll to break down, which allows the yellows and oranges to become visible.

If you are interested in seeing the sights, the Alaska Travel Industry Association suggests visiting Denali National Park & Preserve soon.

Park rangers say the peak of the foliage season will happen during the next couple of weeks before signs of winter quickly move in.

The protected lands encompass more than 6,000,000 acres and is home to the tallest mountain peak in North America.

The area was previously known as Mt. McKinley but was renamed in 2015 to better reflect the heritage of Alaska natives.

If you miss the sights at Denali, tourism officials suggest visiting Hatcher Pass, where peak colors are expected to be visible later in September.

FIRST GLIMPSE OF FALL FOLIAGE PREDICTIONS FOR THE 2022 SEASON

What type of fall foliage season is ahead?

Experts believe the foliage season will vary drastically across the country, and the vibrancy of the colors will depend largely on precipitation deficits.

"Where the drought is worse, the peak is going to be really quick, really fast, and the leaves are going to come down," foliage expert Jim Salge told FOX Weather. "There are areas up along the Canadian border, all across the northern tier of the country, from Minnesota to Michigan to the Adirondacks, where the drought is a lot less severe. And we expect the colors to be bright and early, especially if we get some cold snaps coming down in September."

Weather patterns across the Great Lakes and interior parts of the Northeast are expected to provide optimal viewing, while communities in the Rockies and the West will likely miss out on a show-stopping season.