‘My fight is not done’: Former Laker Ceballos in ICU with COVID-19

Former Laker small forward Cedric Ceballos announced he is being treated in an intensive-care unit for COVID-19, but he insisted his "fight is not done."

LOS ANGELES - Former Laker small forward Cedric Ceballos announced Monday that he has overcome COVID-19, but continues to fight through post-COVID conditions, writing he still cannot "breathe, walk or function" on his own.

Last Tuesday, he shared on social media that he was being treated in an intensive-care unit for COVID-19, but insisted his "fight is not done."

The 52-year-old Ceballos, an NBA All-Star with the Lakers in 1995, announced the diagnosis on social media, posting a photo of himself in a hospital bed with an oxygen mask covering his face. 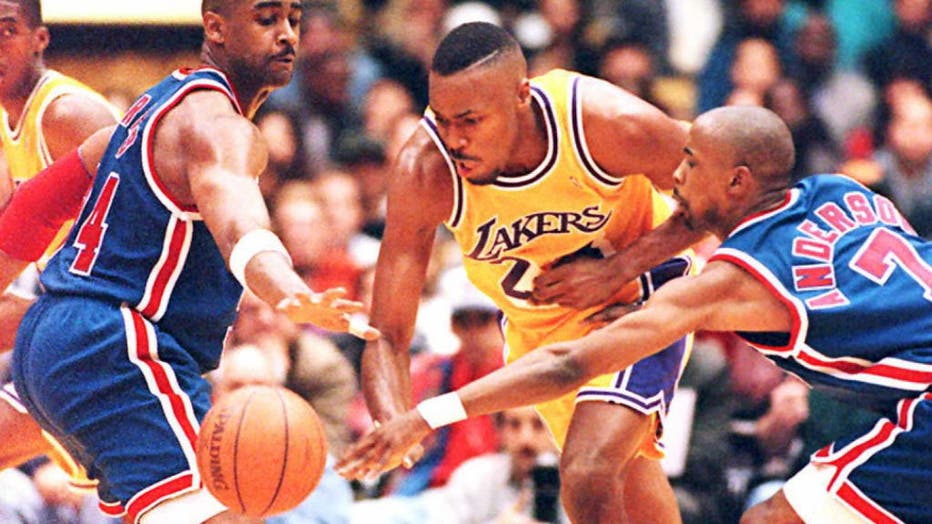 New Jersey Nets Chris Morris (L) and Kenny Anderson (R) fight for the ball with Cedric Ceballos of the Los Angeles Lakers (C) during their 25 January 1995 game in Los Angeles. Ceballos scored 33 points as the Lakers defeated the Nets in overtime 120- (Getty Images)

"On my 10th day in ICU, COVID-19 is officially kicking my but (sic)," he wrote. "I am asking ALL family, friends, prayer warriors healers for your prayers and well wish for my recovery. If I have done ... anything to you in teh past, allow me to publicly apologize. My fight is not done. Thx."

A native of Hawaii, Ceballos was chosen by the Phoenix Suns with the 48th overall pick in the 1990 NBA draft, with Ceballos coming out of Cal State Fullerton. He played four seasons with the Suns, helping lead the team to the NBA Finals in 1992-92. He also won the NBA Slam Dunk Contest in 1992. He spent 11 years in the league, playing for five teams.

It was unclear where Ceballos was hospitalized, or if he was vaccinated against COVID. He announced on Instagram last week that he had been diagnosed with COVID and needed to postpone a charity golf tournament in Phoenix, but at the time he said he was "out of the hospital and currently resting @ home."

On Friday, East Los Angeles boxing legend Oscar De La Hoya, 48, posted a video of himself from a hospital bed, also saying he was being treated for COVID-19, despite being fully vaccinated.