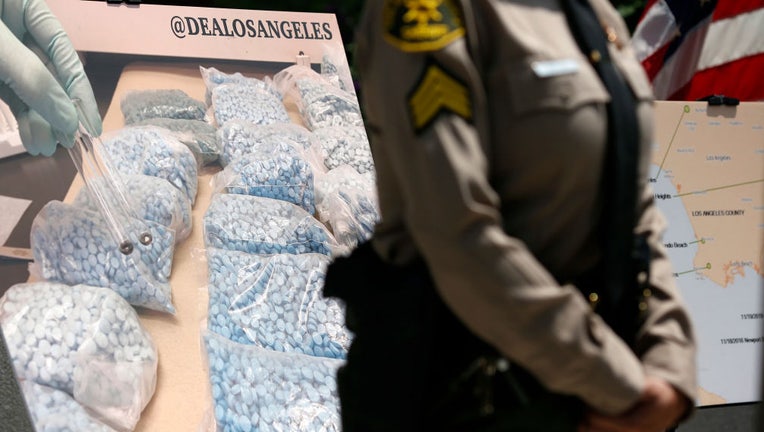 An officer stands in front of a displayed photograph showing counterfeit fentanyl pills during a press conference about a series of criminal cases. (Dania Maxwell / Los Angeles Times via Getty Images)

"Yeah, I've never seen anything like this. The numbers, the organization, the movement. And the federal government is doing a masterful job of keeping it on the down-low as much as possible — sanitizing it as much as possible," retired Customs and Border Protection (CBP) agent and Texas congressional candidate Frank Lopez Jr. told Fox News Digital.

CBP agents seized an unprecedented 10,500 lbs. of the deadly drug in 2021, and seizures have already surpassed 12,000 lbs. so far this year — the most fentanyl ever seized in a single year in the United States. That much fentanyl could kill the entire U.S. population eight times over, the memo circulating among senators notes. 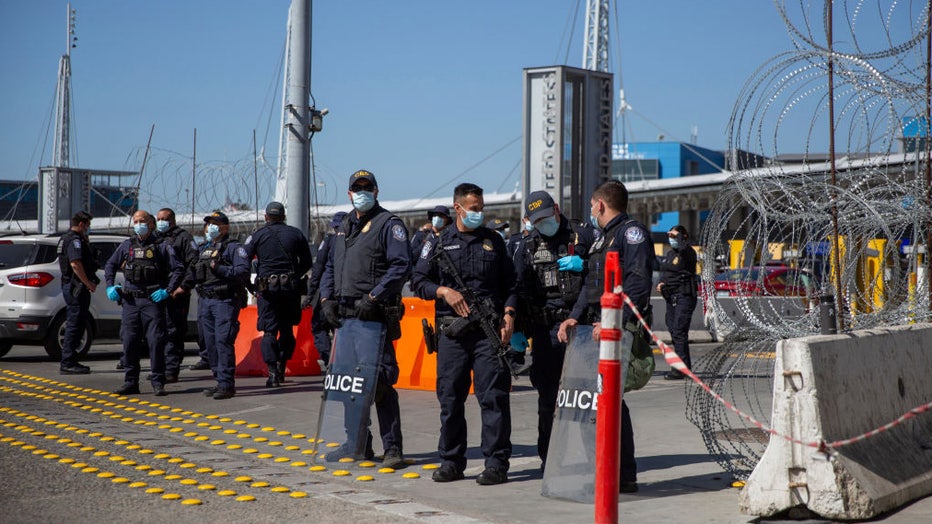 The number of migrants who have successfully crossed into the United States this fiscal year is on track to reach 2 million, with about 8,000 crossings per day. 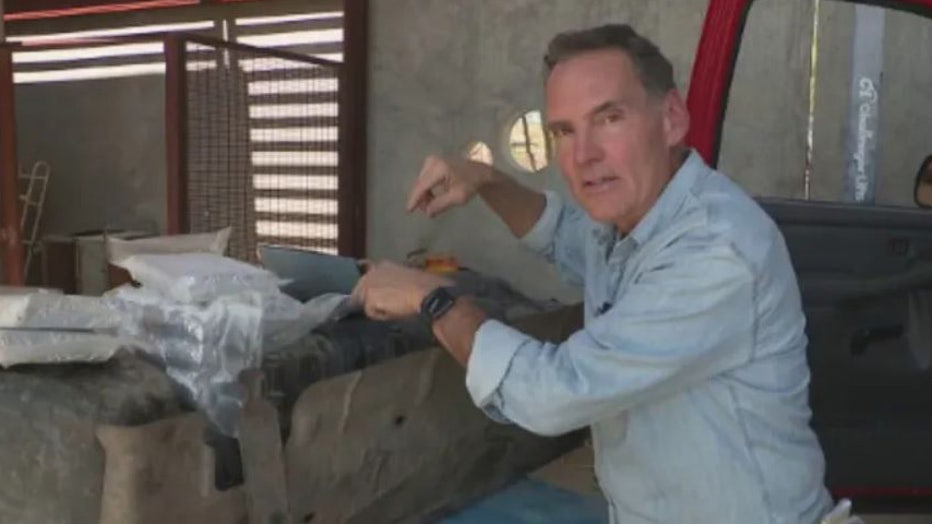 "Certainly me, having spent 30 years in Border Patrol, most of them in the Del Rio Sector, I have never seen anything like this. I've never seen, not just the number of people, but the apparatus … the organization that has gone into the structure of having everything in place to facilitate, expedite, with maximum efficiency, the number of people coming into our country," Lopez said. "We are pouring hundreds of millions of dollars … into these soft-sided facilities, [where the] sole intent is to process and push through as many people as possible."

Drug overdoses led by fentanyl were the No. 1 cause of death for U.S. adults between the ages of 18 and 45 between 2020 and 2021, according to an analysis of Centers for Disease Control and Prevention (CDC) data by the anti-fentanyl nonprofit Families Against Fentanyl (FAF).

U.S. life expectancy fell to its lowest point since 1996 in 2021 with 10% of the decline attributed to drug overdoses.

The Drug Enforcement Administration (DEA) said in a February press release that the "unprecedented overdose epidemic" claims about 275 American lives per day. 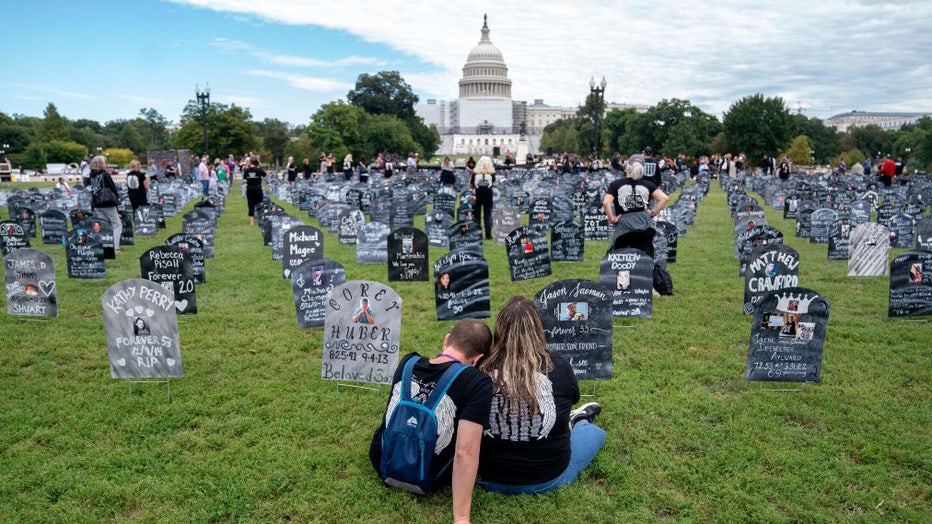 People who lost relatives to a drug overdose sit among imitation graves set up near the US Capitol in Washington, DC, on September 24, 2022. (Photo by Stefani Reynolds / AFP)

Fentanyl is a deadly opioid that is about 50 times more potent than morphine. Drug cartels have latched on to the drug because it is powerful in small doses, meaning it is easier for smugglers to transport. It is also "highly profitable" and "easily avoids detection because of its small size," the memo circulating among senators notes.

Additionally, American children are dying more frequently from fentanyl poisoning because the opioid is appearing more and more frequently in disguised forms like prescription pills and "rainbow fentanyl." Kids unknowingly purchase drugs that they believe to be anything from Percocet to Xanax to even Advil that contains fentanyl. Disguising the opioid is an attempt by drug traffickers to hook kids on to the highly addictive opioid and make more money.

The majority of fentanyl that makes its way into the United States is manufactured in China or Mexico and then smuggled into the U.S. through the southern border, according to the DEA.

FAF founder Jim Rauh, who lost his son to fentanyl poisoning, described the fentanyl crisis to Fox News Digital earlier this month as "a slow-motion chemical weapon attack … that's being perpetrated by China and a third opium war."

Overdose deaths, largely driven by fentanyl, have increased significantly in a number of states between April 2021 and April 2022, including Nevada, Colorado, Georgia and New Hampshire. That's after fentanyl poisoning deaths doubled in 30 states between 2019 and 2021, according to another FAF analysis.

So, what is Congress doing to mitigate the fentanyl and border crises?

Republicans and Democrats have come together on some legislation authored to combat the crisis, such as the bipartisan Securing America’s Borders Against Fentanyl Act, the Temporary Reauthorization and Study of the Emergency Scheduling of Fentanyl Analogues Act, the HALT Fentanyl Act and the Davis Cooper Act, among others.

"Certainly, Democrats are now starting to work with us on these fentanyl issues. We have Sen. [Kirsten] Gillibrand and Sen. [Diane] Feinstein working with us on … the Cooper Davis Act," said Sen. Roger Marshall, R-Kansas, who introduced the Cooper Davis Act. That act would require social media companies to work with federal agencies to combat illicit drug sales on their platforms, told Fox News Digital. 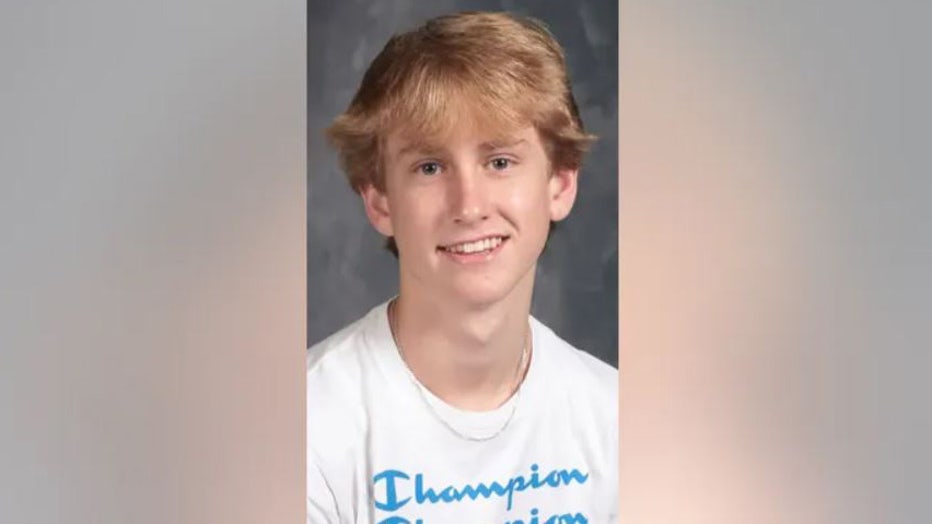 Democrats and Republicans have also come together on potentially designating the deadly opioid as a weapon of mass destruction (WMD).

But Marshall, who visited the border, and other Republicans are questioning why President Biden and Vice President Kamala Harris, his designated border czar, have not visited the southern border since taking office.

"Anything we can do to fight fentanyl poisoning — this epidemic — I'm for it," Marshall said. "It is just so sad that our president, though, turns his back on this. We're trying to put our fingers in the pie, do everything we can, but the root problem is that open border. Why this president won't admit that — why he won't go down there and secure this border — we have no idea."

In the White House

Jean-Pierre has said the Biden administration is making efforts to secure the border.

"We are securing the border," she told Doocy Aug. 31. "The fact that we are securing record levels of funding from DHS so they can stop illicit drugs from entering into the country — the fact that it’s not just drug traffickers that we’re dealing with … we’re stopping … financiers.  This is what’s happening … under this administration."

The White House press secretary added later that Republicans are "not" working with the administration to help Americans, including "kids," stop overdosing on dangerous drugs.

"We pushed for record levels of funding for DHS. Unfortunately, there wasn't the support there on the Republican side for that," Kirby said. "We are pushing forward advanced technologies, as I mentioned earlier, to try to alleviate some of the strain on the manpower down there on the southern border. And we are … working to try to really get at the root causes for some of this migration in particularly the Northern Triangle countries … to help these countries create conditions that would help avoid people from having to flee."

Experts recommend people who use any kind of drug carry Narcan, a lifesaving medicine also known as naloxone, which has the ability to reverse symptoms of an overdose and potentially save lives, according to Family First Intervention.