A man in Sherman Oaks was robbed at gunpoint after a fender bender Monday morning. He says he captured video of the crime on his cell phone purely by accident while he was taking photos of the damage to his car.

SHERMAN OAKS, Calif. - A terrifying new tactic behind a brazen robbery was reported Monday to the Los Angeles Police Department. The LAPD said that the suspect's crashed their car into the victim's vehicle before robbing him at gunpoint.

The incident happened around 1:40 p.m. Monday near the intersection of Van Nuys Blvd. and Huston St. in Sherman Oaks.

According to the LAPD, three male suspects armed with a handgun crashed their vehicle into the victim's car. At the time of the robbery, the victim was recording on his cell phone. During the video, one of the suspects' can be heard yelling at the victim, "Give up the watch, give up the watch!"

Following the robbery, the suspect's fled the scene in a white Mercedes-Benz.

A detailed description of the suspects was not immediately available. 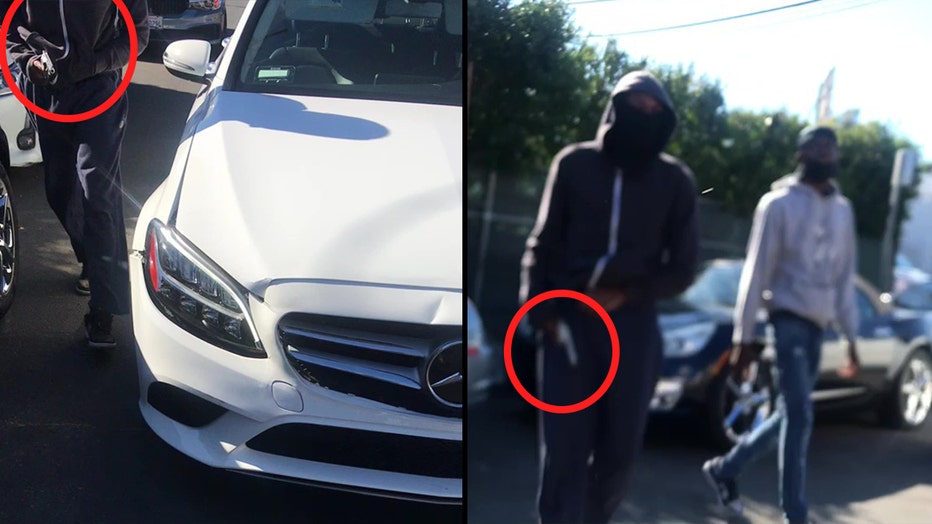 Police told FOX 11 that the victim was robbed of his jewelry.

Anyone with information about the robbery was urged to contact the LAPD.

On Tuesday, LAPD Chief Michel Moore said that robberies in the area have increased 14% in the first three weeks of 2022 compared to the same period in 2021.

Moore noted, however, that the number of homicides and shooting victims in the city slowed during the first few weeks of 2022 compared to last year.

"While the numbers are still stabilizing, I can report that in the first three weeks we have seen somewhat of a slowing down of the number of shots fired, number of shooting victims and the number of homicides compared to the same period last year."

Moore said the LAPD is focusing its resources first on violent crime, and the department is working to educate the public to "lock it, hide it, keep it," to prevent being victims of property crimes.

Los Angeles, as well as cities across the U.S., saw spikes in select categories of crime in 2021, including an 11.8% increase in homicides, a 3.9% increase in violent crime and a 4.2% increase in property crimes.