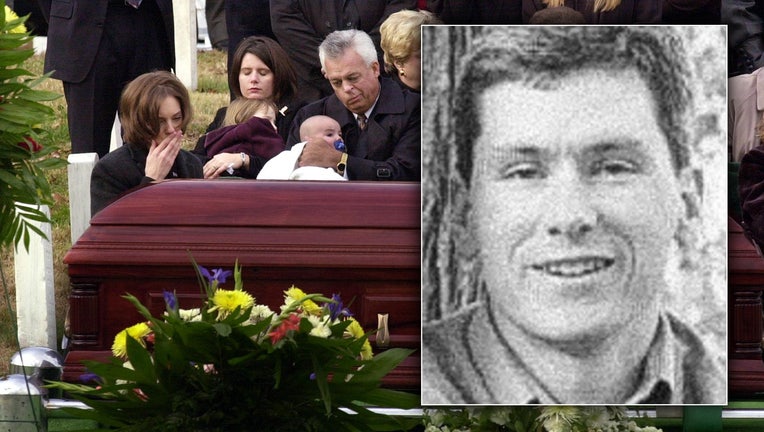 Shannon Spann, (L), widow of the CIA's Johnny Micheal Spann, touches her lips to her hand before touching the casket at the conclusion of the funeral at Arlington National Cemetery, 10 December, 2001. Spann's father, Johnny (C), holding his grandson,

MONTGOMERY, Ala. - Mike Spann, a Marine turned CIA officer, felt a duty to go to Afghanistan in the wake of the Sept. 11, 2001, attacks.

In one of his last phone calls home to check on his children, he told his father he was hopeful they would gather information to locate the mastermind of the attacks, Osama bin Laden, his father recalled.

Spann was killed days later, on Nov. 25, 2001, during a prisoner uprising at the fortress where he had been questioning extremists. The 32-year-old CIA paramilitary officer from Winfield, Alabama, was the first of 2,448 American service members to be killed in combat in Afghanistan.

Spann’s father said he was disgusted by images of America’s chaotic withdrawal Monday showing people, desperate to escape the Taliban takeover, clinging to the side of a departing U.S. military jet.

"It makes me sick to my stomach when I see it. It’s disheartening. It’s shameful, I think. I think it’s shameful that we would do this," Johnny Spann said.

The elder Spann had just dropped off his granddaughter in Birmingham when he had to pull over and look at the images on his cellphone after hearing them described. The scenes of people plunging to their deaths from the plane reminded him of the Americans who jumped from the towers of the World Trade Center, he said.

RELATED: Human remains discovered in wheel well of C-17 that departed Kabul with Afghans clinging to it

The violence unfolding in Afghanistan is hitting close to home for veterans here in the Bay Area. FOX 13's Jordan Bowen has the story.

Spann said he is not opposed to Americans leaving Afghanistan but disagrees with the timing and how it was done. With the Taliban takeover, his mind goes immediately to the Afghans who helped his son and other Americans.

"They are going to die. They are going to kill them. And how can someone stomach that when we know we made them promises? There is no telling how many people we would have lost if those people hadn’t helped us," he said.

As a teenager, he had Marine flags plastered on his ceiling and walls. During family trips, he would always want to go by military battlefields and landmarks. Near his graduation from Auburn University, he announced he was joining the Marines, a decision some questioned because he was a young husband.

"Dad, I’ve always wanted to be a Marine. If I don’t do it now, I’ll never have another opportunity," his father recalled him saying.

After the Sept. 11 attacks, Mike Spann felt a duty to go to Afghanistan even though the decision would mean leaving his two daughters, infant son and wife.

The span of the war can be measured in Spann’s three children, just youngsters when their father died but now grown.

In the years since his son’s death, Johnny Spann has become obsessed with learning the details — tracking down the autopsy report, photos and speaking to people who worked with his son in his last days. He is also sharply critical of President Joe Biden’s withdrawal decision.

Much of the work his son and others did has been undone, he said, but that doesn't make their contributions meaningless.

His son, he said, went to find bin Laden: "He died before we found Osama bin Laden, but I think that maybe some of the things he did helped us get to that point."

The elder Spann cautioned people not to think that the threat to America has ended with the withdrawal from Afghanistan.

"This war is not over. We’ve just conceded territory that we took," he said.