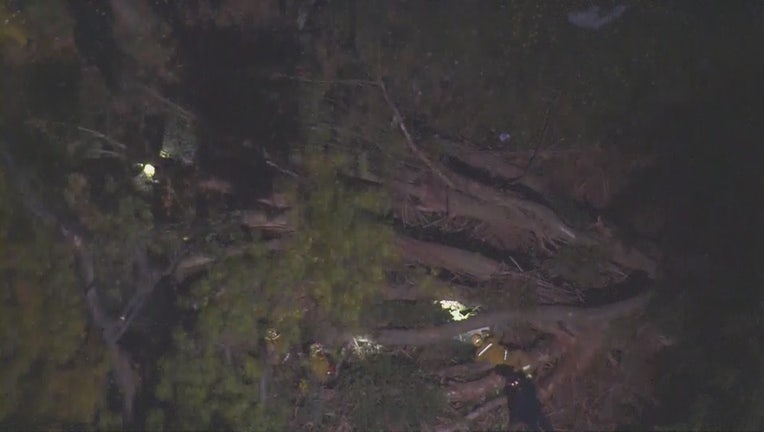 LOS ANGELES, Calif. (CNS/ FOX 11) - The family of a 61-year-old woman who died when an 80-foot tree fell on her and other members of her daughter's wedding party in Whittier last December sued the city this week.

Relatives of Margarita Mojarro are seeking unspecified damages. The plaintiffs include the woman's husband, Feliciano Mojarro; and four of her children, including the bride, Patricia Mojarro.

A representative for the city of Whittier could not be immediately reached for comment.

The tree toppled over at William Penn Park in the 13900 block of Penn Street about 4:30 p.m. Dec. 17, according to the Los Angeles County Fire Department. Mojarro, of San Pedro, died at a hospital. A 3-year-old girl, reported to be a niece of the bride, was hospitalized in critical condition with a traumatic brain injury and a half-dozen other people were treated at a hospital for injuries not considered life-threatening.

The tree was a Blue Gum eucalyptus that had become ``acutely deceased,'' according to the suit. ``Before plaintiffs knew what was happening, the massive, multi-thousand-pound tree was upon them and they could not escape its path of destruction.''

The city knew of the dangerous condition of the tree and had the means and authority to protect park visitors against such a tragedy, the suit alleges. The tree was over-watered and allowed to grow on an unsafe 20 percent
grade, according to the complaint.

The park is a popular photo-taking spot because of its mature trees. The wedding party was apparently posing for pictures at the time the tree fell.

Authorities theorized that a storm that had dropped 1.85 inches of rain in Whittier that week, coupled with weakening of the tree from the lingering drought, were factors in its collapse.