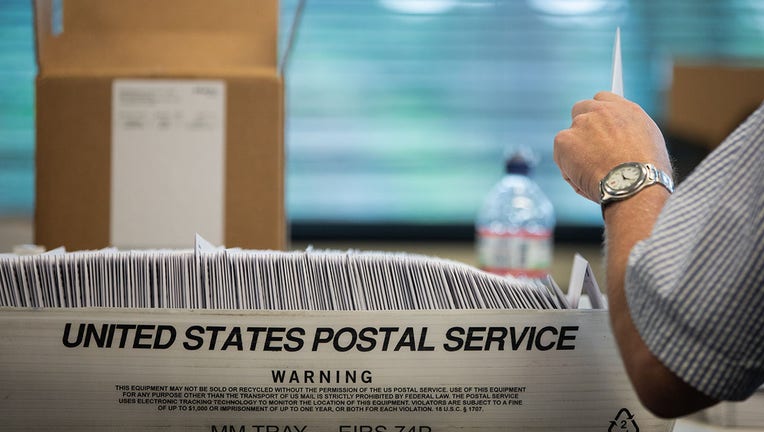 SOUTHFIELD, Mich. (FOX 2) - If claims made by an alleged Michigan USPS employee are true - that he/she was told to separate ballots from regular mail the day after the election to stamp them with the previous day's date - those ballots would have no bearing on election results as Michigan law requires ballots are received by election day at 8 p.m.

At least 10 million people have viewed a video shared by James O'Keef of Project Veritas, a conservative investigative outlet, that claims a Michigan USPS employee was told by his supervisor on Wednesday - the day after the election - to separate ballots from standard mail so they could be hand-stamped with Tuesday's date, in order to be counted for the elections.

This was well-documented in the weeks leading up to the election with Secretary of State Jocelyn Benson saying as early as Oct. 20 - almost two weeks before the election - that it was too late to mail ballots to guarantee they arrive in time and urged voters drop them off in person.

In the run-up to Election Day, the state had asked for more time to review and count absentee ballots, specifically two weeks. After originally being approved, the Court of Appeals denied the effort in a 3-0 vote, giving the state.

Michigan law says absentee ballots must be turned in by 8 p.m. on Election Day to be valid. Michigan Court of Claims had ruled that any ballots postmarked by Nov. 2 could be counted if they arrived within two weeks after the Nov. 3 election. However, that was overturned on Oct. 16 by the court of appeals, saying the state legislature has to make the change, not a judge.

Fact-checking site Politifact looked into the claims made in the video and contacted the USPS who said they were aware of it. They also talked to the Traverse City Police Department who said it was neither aware of nor investigating the video.

"Changing postmarks on ballots yesterday would not have mattered," Department of State spokesperson Tracy Wimmer said in an email. "Any ballots in the post office (Wednesday) means they were not already in the hands of a clerk Tuesday night and therefore would be rejected."

Politifact talked with the Traverse City clerk's office who said there were just two absentee ballots received after the deadline and neither was postmarked on Nov. 3.

Project Veritas told Politifact it stood by the story and that a second employee backed up the story.