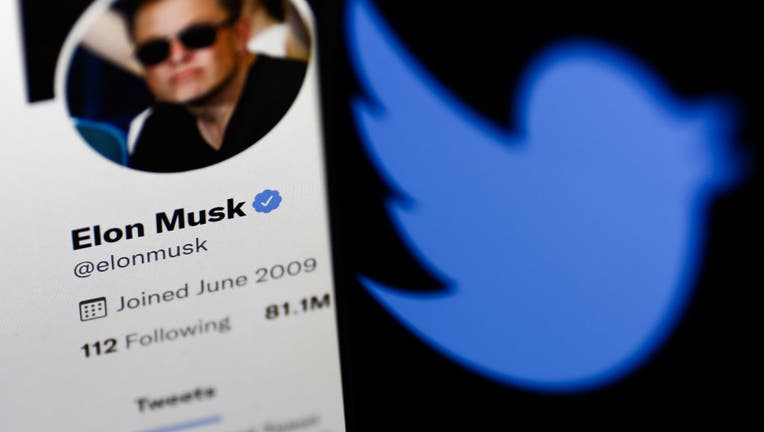 Elon Musk's Twitter profile displayed on a computer screen and Twitter logo displayed on a phone screen are seen in this illustration photo taken in Krakow, Poland on April 9, 2022. (Photo by Jakub Porzycki/NurPhoto via Getty Images)

As Twitter’s newest board member and largest shareholder, Elon Musk is already floating suggestions for changes he’d like to see on the social media platform.

In a series of tweets late Saturday, the Tesla and SpaceX CEO said that the company should include an "authentication checkmark" as a feature of its Twitter Blue premium subscription service, which costs $2.99 a month.

Twitter adds a checkmark logo next to a user name when the account has been verified "authentic, notable and active."

Such a move, Musk said, would "massively expand" the pool of verified user accounts and discourage the proliferation of spam "bot" accounts, making them too expensive to maintain.

Musk also shared ideas for how Twitter should charge for its subscription membership, saying the fee "should be proportionate to affordability and in local currency," and adding: "Maybe even an option to pay in Doge?" referring to the Dogecoin cryptocurrency.

"And no ads," Musk tweeted. "The power of corporations to dictate policy is greatly enhanced if Twitter depends on advertising money to survive."

Nearly 90% of Twitter’s revenue in 2021 came from advertising.

Musk’s latest tweets about Twitter, including posting polls asking his 81 million followers whether Twitter is "dying" and whether the company’s San Francisco headquarters should be converted into a homeless shelter "since no one shows up anyway," followed a tweet earlier in the week asking if he should add an edit button on the platform.

Last week, Twitter disclosed in a regulatory filing that it entered into an agreement with Musk giving the billionaire a seat on the company’s board, with the term expiring at its 2024 annual shareholders meeting. The move came a day after it was disclosed that Musk took a 9% stake in the company.