LOS ANGELES - Students at Loren Miller Elementary School in South Los Angeles paid tribute to fallen NBA legend Kobe Bryant and his daughter Gianna on Monday morning, the same day a public memorial is scheduled to be held for the pair at Staples Center.

The elementary school students and staff dressed up in Lakers gear and held up letters that spelled out Kobe and Gianna's names.

The kids at Loren Miller, like many others around the world who looked up to the Lakers legend, wanted to show their love and respect to the man who inspired so many young generations, especially here in Los Angeles. 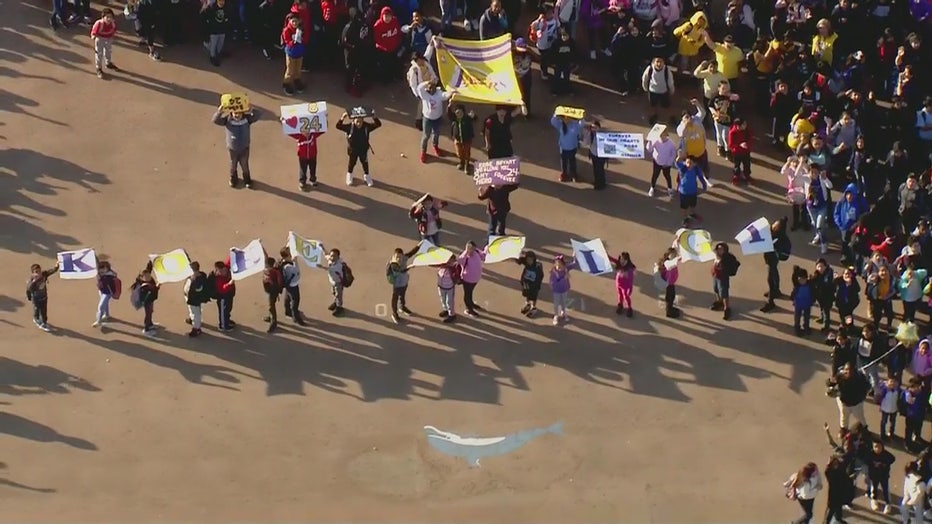 Bryant was killed the morning of Jan. 26, when the helicopter carrying him, his 13-year-old daughter Gigi and seven others crashed into a mountainside in Calabasas, California, while flying to a girls basketball tournament at his Mamba Sports Academy. Bryant coached Gigi's team, which was scheduled to play that afternoon. She and two teammates were among the nine people killed.

The deaths shook Los Angeles and the sporting world. Staples Center is where Bryant starred for the Los Angeles Lakers for most of his two-decade career and the date 2/24 corresponds with the No. 24 jersey he wore and the No. 2 worn by Gigi.