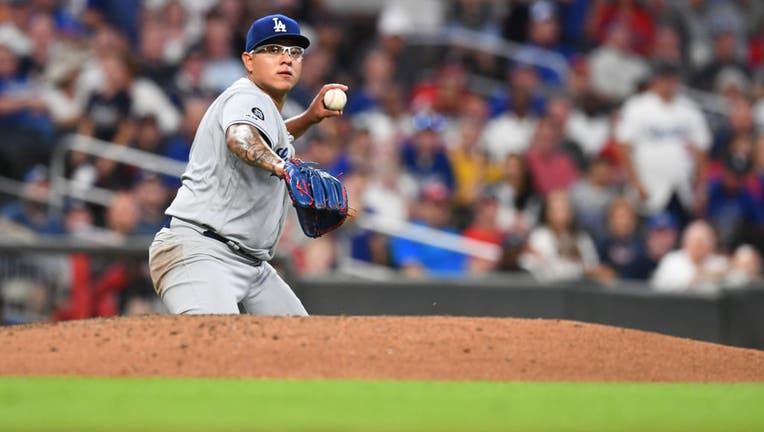 ATLANTA, GA - AUGUST 16: Julio Urias #7 of the Los Angeles Dodgers throws out a runner from his knees for the final out of the game against the Atlanta Braves at SunTrust Park on August 16, 2019 in Atlanta, Georgia. (Photo by Scott Cunningham/Getty I

Dodgers pitcher Julio Urias has been suspended 20 games by Major League Baseball for violating MLB's domestic violence policy in a May 13 incident at the Beverly Center.

"My office has completed its investigation into the allegations that Julio Urias violated Major League Baseball's Joint Domestic Violence, Sexual Assault and Child Abuse Policy," MLB Commissioner Rob Manfred said in a statement Saturday. "Mr. Urias cooperated fully with my office's investigation. Having reviewed all of the available evidence, I have concluded that Mr. Urias violated our policy and that discipline is appropriate."

The alleged attack took place in the parking lot of the Beverly Center at 8500 Beverly Blvd. TMZ reported that a witness called police saying the Dodgers left-hander was in the parking lot arguing with a woman and shoved her to the ground. Officers responded to the scene and spoke with the woman, who denied anything physical took place, insisting it was nothing more than a heated argument, according to TMZ.

Urias, 22, was arrested on suspicion of misdemeanor domestic battery. It was announced in June he would not face charges, although he must complete 52 weeks of counseling, and prosecutors retain the right to charge him if he commits another violent attack within the year.

The Dodgers issued the following statement: "While we are disappointed in what occurred and support the decision by the Commissioner's Office, we are also encouraged that Julio has taken responsibility for his actions and believe he will take the necessary steps to learn from this incident."

The unpaid suspension includes five games served while Urias was on administrative leave from May 14-21, leaving 15 games to be served. Urias has agreed not to appeal the discipline, according to MLB's official website.