Deputy, 4 others killed in shooting in hostage situation at California home

A California sheriff’s deputy was fatally shot this weekend when his SWAT team tried to rescue people held hostage inside a San Joaquin Valley home by a man armed with an AK-47-style rifle and a handgun, authorities said Monday. Four other people were also killed in the shootout.

KERN COUNTY, Calif. - A California sheriff’s deputy was fatally shot this weekend when his SWAT team tried to rescue people held hostage inside a San Joaquin Valley home by a man armed with an AK-47-style rifle and a handgun, authorities said Monday.

Four other people were also killed in the shootout, including the gunman — who had been previously arrested multiple times for domestic violence offenses, according to Lt. Joel Swanson, a spokesperson for the Kern County Sheriff’s Office.

(Editor’s note: This story includes discussion of domestic violence. If you or someone you know needs help, call the National Domestic Violence Hotline at 1-800-799-SAFE (7233).)

Swanson did not know the specifics of the 41-year-old shooter’s previous arrests and he has not yet been named publicly. A restraining order against the gunman — filed by one of the victims and effective June 3 — was supposed to stop him from coming to the home where the killings occurred.

Three people inside the home — believed to be the gunman’s sons and their mother — were fatally shot during the standoff Sunday afternoon in Wasco, a small community in the middle of farm fields northwest of Bakersfield.

The woman had filed the restraining order, Swanson said, but authorities were still trying to determine what had prompted her to seek legal action against him. The restraining order was also supposed to prevent the gunman from having firearms.

The shooting "has the implications of what we see in law enforcement when it comes to domestic violence and how serious it is," Kern County Sheriff Donny Youngblood said, "and, quite frankly, how a restraining order is not bulletproof."

Deputies shot and killed the suspect after he climbed onto the home’s roof with the firearms.

Youngblood identified the slain deputy as Phillip Campas and called him "a star in our organization." 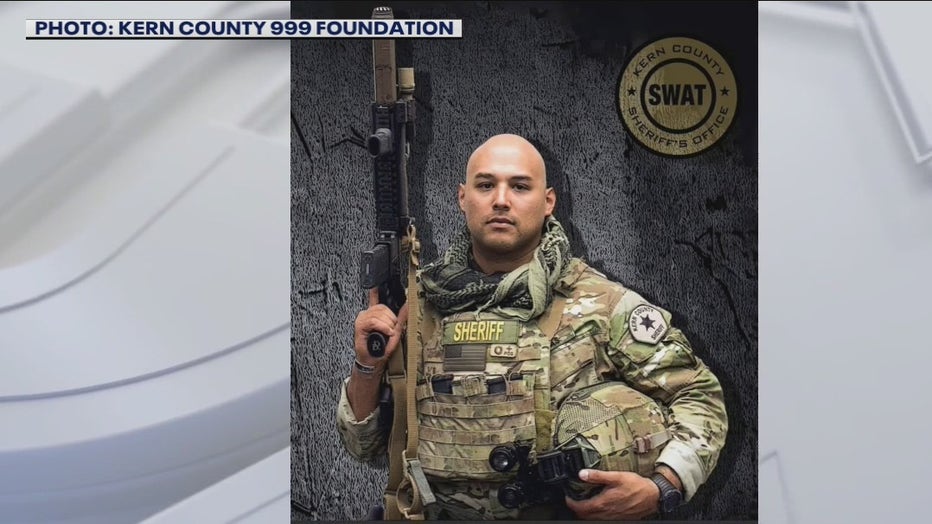 Campas, 35, was a five-year veteran of the sheriff’s office and had previously served as a sergeant in the U.S. Marines in Afghanistan. He was an instructor at the academy, as well as a member of the sheriff’s SWAT team and the honor guard.

Campas is survived by his wife and two young children.

"We thought he’d been here over 10 years, he’s had that kind of impact," Youngblood said. "He was here for five."

Deputy Dizander Guerrero was wounded by gunfire and two deputies were struck by shrapnel during the violence.

The violence began around 1 p.m., and included a 911 call that had an open line into the home, Youngblood said. The activity heard on the call led deputies to believe at least one person was still alive inside the home.

"We felt obligated to go in and try and rescue that victim," the sheriff said.

Two women and two girls were able to escape the home safely, Youngblood said. Their relationship to the shooter and the other victims was not immediately clear, but Swanson said they were believed to be acquaintances of the woman and her sons.

The victims inside the home — only described as the gunman’s 17- and 24-year-old sons and their 42-year-old mother — also have not been named publicly.

The first deputies to arrive at the home, following multiple 911 calls, were met by one of the women who had escaped. She told them there was a gunman inside the house and two to three people had been shot.

Within minutes, Youngblood said, the gunman started firing at the deputies from inside the house. A SWAT team, including Campas and Guerrero, approached the front door and encountered gunfire from a rifle. The deputies fired back at the shooter.

Campas and Guerrero were struck and pulled to a safe location so they could be rushed to the hospital. The two deputies who were hit by shrapnel did not leave the standoff, the sheriff said.

Over several hours, the suspect fired out of the house at the deputies. Around 6:30 p.m., the gunman climbed onto the roof with the rifle and handgun. Deputies fired at him, fatally striking him.

Authorities found the other three victims dead inside the home.

More than 100 deputies responded to the scene and 23 — some on the SWAT team and others who were close with Campas — are currently on administrative leave because of the shootings.

The SWAT team members were off-duty and not responding to calls on Monday as they grieved.

One deputy died and another deputy was wounded in a shooting during a standoff at a home, according to the mayor of the California city where the gunfire erupted.

The 41-year-old suspect has not yet been named publicly but Youngblood said there was a restraining order filed against him that prohibited him from having firearms. The victims inside the home — only described as the gunman’s 17- and 24-year-old sons and their 42-year-old mother — also have not been named publicly.