Some of the nation's most popular apps will not only offer its users a shot at love but a chance to show off their coronavirus vaccine status. Sites such as Tinder, Hinge, Bumble and OK Cupid want you to get out of the house and back on dates.

WOONSOCKET, R.I. - CVS Health on Thursday announced a number of giveaways as part of a "#OneStepCloser sweepstakes" to encourage COVID-19 vaccination at its stores, including monetary prizes, free cruises and tropical vacations.

The company is the latest major corporation to launch a giveaway that serves as an incentive to get vaccinated.

"Beginning June 1, eligible customers who received or plan to receive a Covid-19 vaccination through CVS Health may choose to enter the #OneStepCloser sweepstakes for an opportunity to win from thousands of fun and exciting prizes through weekly drawings and grand prizes over a six-week period," CVS said in a statement.

The prizes include $500 to 125 lucky winners, and five grand prize giveaways of $5,000 for family reunions, the company said.

One hundred people will win a seven-day, Norwegian Cruise Line trip for two in a balcony stateroom to their choice of destination including the Caribbean, Alaska, Europe and more. Another prize is a VIP package for two to attend the iHeartRadio Music Festival, offering first-class airfare, hotel, floor seats and backstage passes with artists.

In a partnership with Procter & Gamble, one person will win a VIP trip to Super Bowl LVI in Los Angeles for two, including Super Bowl game tickets, airfare and hotel.

The company said all individuals 18 and up who received a vaccination or have registered to receive one from CVS Health, either at a CVS Pharmacy retail location, or through CVS Health at a long-term care facility, employer-based Return Ready clinic or another off-site clinic, prior to July 10 are eligible to win. Customers can enter to win here beginning June 1. 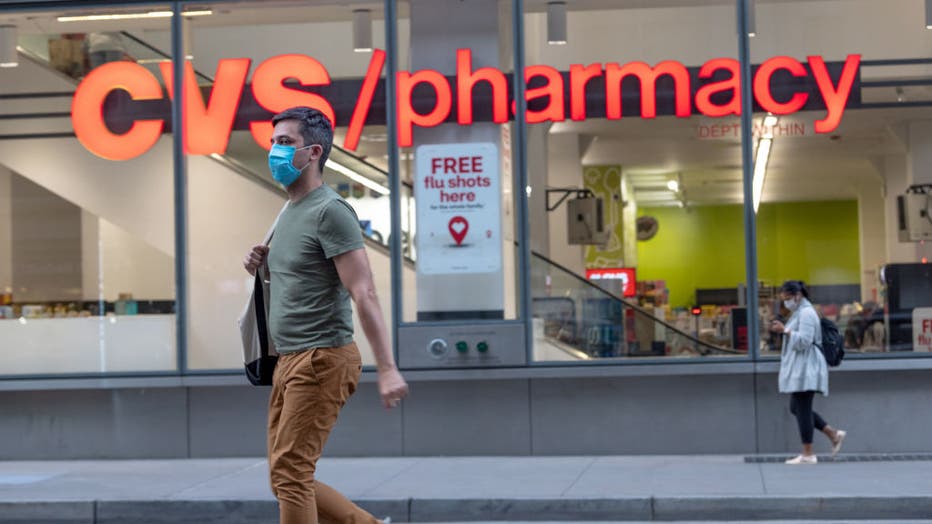 The CVS announcement comes amid an all-out effort to get as many people inoculated as possible to end the pandemic. President Joe Biden has set a goal of administering at least one dose of a COVID-19 vaccine to 70% of U.S. adults by the Fourth of July.

To date, nearly 62% of American adults have gotten at least one dose — and 50% of the adult population is fully vaccinated, according to data from the U.S. Center for Disease Control and Prevention.

CVS Health, one of the federal government’s pharmacy partners helping in the effort, has administered more than 17 million COVID-19 vaccines in long-term care and in its stores. Over 9,600 CVS Pharmacy locations across the country offer a chance to get vaccinated, the company said.

Dr. Kyu Rhee, CVS Health’s senior vice president and chief medical officer, said they are "grateful for the millions of people" who have received the jab but said, "we have a long way to go."

"Getting as much of the population fully vaccinated will bring us one step closer to all the things we’ve missed during the past 14 months, and keep our country moving in the right direction," Rhee said in the statement.

The company noted the CDC’s Household Pulse Survey, which is tracking vaccination rates and vaccine hesitancy. The most recent survey indicates that at least 11.4% of U.S. adults remain hesitant about receiving a COVID-19 vaccine. CVS said it aims to "close gaps in hesitancy" and wants its sweepstakes to serve as a "positive reminder of the activities that are possible once vaccinated."

United Airlines also launched a sweepstakes this week that will offer five lucky travelers free flights for a year, as long as they are part of the carrier’s rewards program and are fully vaccinated.

At the state level, governors have also offered vaccine-incentive lotteries. Ohio Gov. Mike DeWine launched a "Vax-a-Million" lottery contest to boost lagging vaccination rates, giving five $1 million prizes and college scholarships away each Wednesday for the next several weeks. The first winners were announced May 26, whose names were drawn from more than 1.5 million entrants and selected in a random drawing.

"I know that some may say, ‘DeWine, you’re crazy! This million-dollar drawing idea of yours is a waste of money,’" the governor said when he announced the program on May 12. But with the vaccine now readily available, the real waste, "is a life lost to COVID-19," the governor said.

The concept seemed to work, at least initially. The number of people in Ohio age 16 and older who received their initial COVID-19 vaccine jumped 33% in the week after the state announced its million-dollar incentive lottery, according to an Associated Press analysis.

But the same review also found that vaccination rates are still well below figures from earlier in April and March.