LOS ANGELES - A Los Angeles city-run vaccination site opened Tuesday at the University of Southern California and is expected to administer thousands of vaccines per day once fully operational.

The site is located in the seven-level Flower Street parking garage at the University Park campus, located near the Expo Park Metro Station. People seeking a vaccine can drive up, walk up or request additional access services.

"This number will be initially limited due to supply constraints but ready to jump into action and grow as those doses are delivered in the coming weeks," Mayor Eric Garcetti said when he announced the site last week. He thanked USC President Carol Folt for her work to open the campus up to the public for vaccinations.

In addition to the new site, Garcetti also said the city is partnering with the rideshare app Uber to help people in South Los Angeles get inoculated at USC.

Uber is providing 15,000 free rides to pick up residents in South L.A. and take them to the site, and 20,000 rides will be available at half-off, "so at a moment when too many people in our city might qualify for the vaccine but don't have a car or a ride, we're going to make sure you get to your shot," Garcetti said. 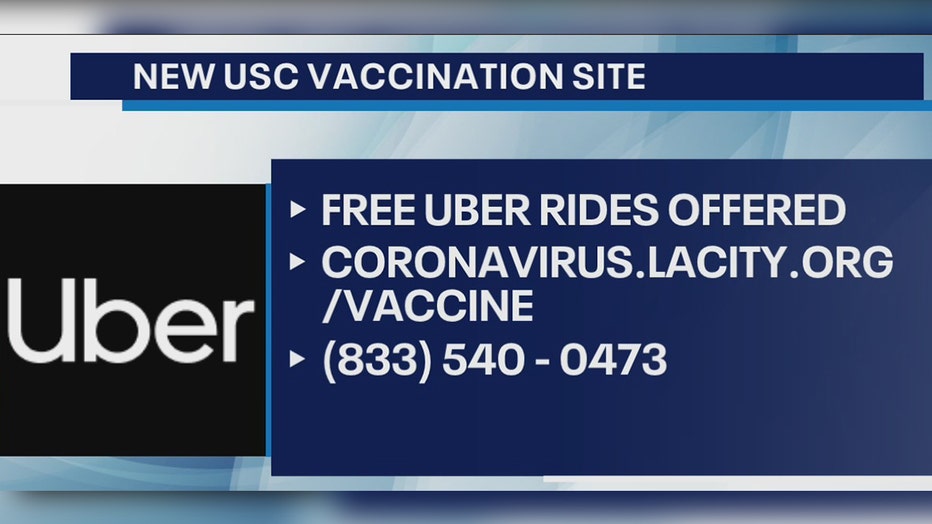 The program is funded by Uber, which contributed $500,000 worth of rides, and the nonprofit Mayor's Fund for Los Angeles, to which Garcetti urged people to make donations at mayorsfundla.org.

"Right now, the mayor's fund is focusing more and more on those mobile teams, more on transportation and providing more support for outreach to vulnerable populations including our seniors and people with disabilities," Garcetti said.

City sites will remain open Tuesday through Saturday from 8 a.m. to 4 p.m., with the exception of Dodger Stadium, which will operate from 8 a.m. to 8 p.m. Tuesday and 8 a.m. to 6 p.m. during the rest of the week.

Patients should note that the date stamped on the CDC vaccination cards received after their first dose is not an appointment confirmation.
Instead, everyone should adhere to the appointment details provided by Carbon Health via email and/or text. First-dose appointments are available online at Coronavirus.LACity.org/VaxAppointment.