Los Angeles County's Black residents saw their rates of infections and hospitalizations rise during a time when other ethnic groups were seeing lower numbers, according to the latest data from the health department.

Hospitalizations in the county due to COVID-19 dropped from 284 to 273, with the number of COVID patients in ICU units declining from 77 to 65, according to state figures.

Monday's figures brought the county's totals to 1,252,739 cases and 24,504 fatalities since the pandemic began, according to the Los Angeles County Department of Public Health.

The county's rate of infections has grown alarmingly over the past several days. Health officials say the increase is being fueled by the rise in COVID-19 variants, particularly the more contagious Delta variant. They added that with 4 million residents in L.A. County still unvaccinated and a tripling of cases over the past week, there is enough risk for the variant to pose a significant threat.

The variant is believed to be responsible for more than 26% of current COVID infections in the United States and is also blamed for rampant infections in India and parts of the United Kingdom.

It has also become California's most identified strain of the coronavirus, accounting for 35.6% of the variants analyzed in June – a steep increase from May, when the number was just 5.6%, according to the California Department of Public Health.

"We are grateful to everyone for the tremendous progress we have made over the past year, yet we are not out of the woods just yet," Los Angeles County Public Health Director Barbara Ferrer said over the weekend.

"If you plan to gather with others this holiday, please take sensible precautions to avoid transmission of the virus, particularly if you are gathering with individuals and children not yet vaccinated. If you are unvaccinated, consider getting your vaccination now to increase your protection as other public health precautions have been lifted; talk to a friend or loved one who has been vaccinated and ask them about their experience. Vaccines provide us with the best tool for ending this pandemic that has plagued us for so many months." 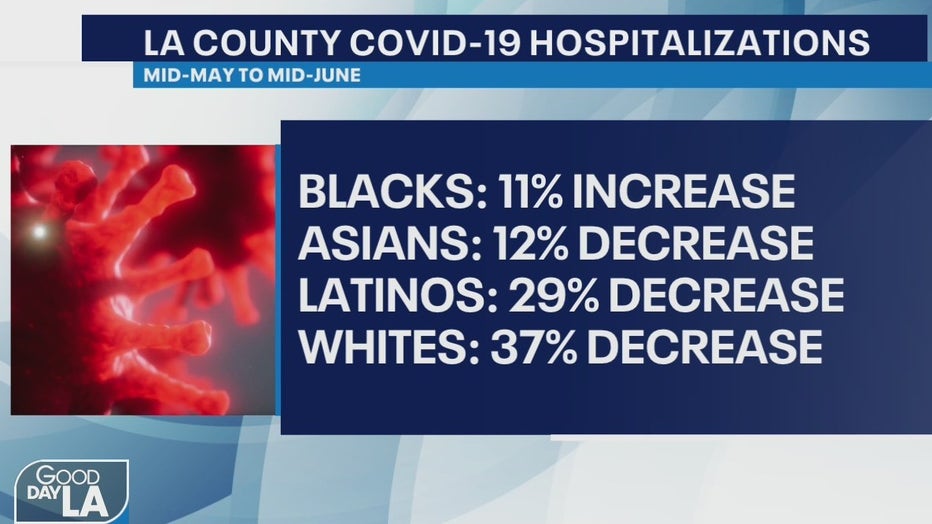 Meanwhile, the county's Black residents saw their rates of infections and hospitalizations rise during a time when other ethnic groups were seeing lower numbers, according to the latest data from the health department. Over a two-week period in late May and early June, the case rate for Black residents rose 18%, but declined 6% for white residents, 4% for Latino residents and 25% for Asian Americans.

The hospitalization rate for Blacks grew by 11% while declining 37% for whites, 12% for Asian Americans and 29% for Latinos.

Statistically, Black residents are less likely than other racial and ethnic groups in Los Angeles County to get vaccinated against the virus. In mid-June, county health officials expressed concern that young Black and Latino residents continue to lag behind the rest of the population in COVID-19 vaccination rates.

On Friday, the department said the rolling average rate of people testing positive for the virus was increasing, but still remains very low at just 1.3%. That's up from 1.2% on Thursday but is four times the 0.3% rate reported by the county in early June.

Health officials have been closely watching case numbers and testing- positivity rates, which have been steadily inching upward since most COVID health restrictions were lifted on June 15. The increases come as a highly contagious "Delta" variant of the COVID-19 virus continues spreading locally and nationally.

Ferrer said Thursday 245 cases of the "Delta" variant have been confirmed in the county, nearly double the number from last week. The county conducts limited sequencing tests needed to identify the variants, so the number cannot be extrapolated across the population, but "Delta" has become the most dominant variant detected in the county.

More than 10.4 million doses of COVID-19 vaccine have been administered in the county. The latest numbers show that 59% of residents age 16 or older are fully vaccinated, while 68% have received at least one dose.

The numbers are higher among seniors, with 76% of people 65 and older fully vaccinated, and 87% with at least one dose.

In hopes of encouraging more people to get vaccinated, the county is continuing to offer incentives. Continuing until Thursday, anyone who gets vaccinated at sites operated by the county, the city of Los Angeles or St. John's Well Child and Family Center will be entered for a chance to win one of four ticket packages for the Huntington Library, Descanso Gardens, Los Angeles County Arboretum and South Coast Botanic Garden. The packages include an annual membership to the Huntington and one-day passes to the other facilities.

In Orange County, health officials on Friday confirmed another 74 COVID infections, lifting the cumulative total to 256,445. One more death was also reported, raising the county's death toll to 5,123.

The number of people hospitalized with COVID in Orange County fell from 70 on Thursday to 63 on Friday, with 12 of those patients in the ICU.

OC officials no longer update their daily case numbers on the weekend.