Authorities urged thousands of fans who were at Denmark's game against Belgium on June 17 to get checked for the virus after at least five people were found to be positive with the delta variant.

Danish Health Minister Magnus Heunicke wrote on Twitter on Wednesday that about 4,000 people sat near at least some of those who tested positive.

The other two positive cases stemmed from the team's game against Russia on Monday.

"I don’t know which variant it is, but again that’s a match where people are sitting very close together," said Thomas Rydahl, the head of the safety and security services for the games in Copenhagen. 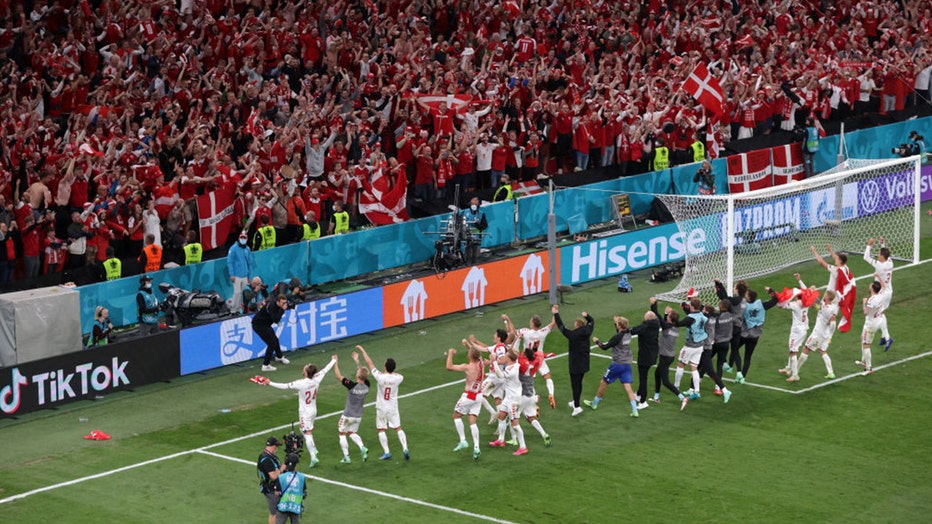 FILE - Players of Denmark celebrate in front of their fans following their side's victory in the UEFA Euro 2020 Championship Group B match between Russia and Denmark at Parken Stadium on June 21, 2021 in Copenhagen, Denmark.

Also, Finnish broadcaster YLE reported that at least 80 infections have been found in people who entered Finland from Russia in recent days. They reportedly were soccer fans returning from St. Petersburg, where Finland played two of its Euro 2020 matches.

Authorities in the Russian city tightened anti-coronavirus restrictions last week in an effort to curb a spike in new infections. That included closing food courts in the city’s shopping malls and its Euro 2020 fan zone.

Separately, the governing body of European soccer said Thursday it was "satisfied with the overall situation" in the tournament's 11 host stadiums across the continent, where public authorities take the lead on managing virus issues.

"The overall rates of positive results following the group stage of the Euro 2020 tournament are still marginally low," UEFA said in a statement.

All those who attended the three Euro 2020 games in Copenhagen had to provide valid documents showing they were not infected with COVID-19 before being allowed to enter Parken Stadium.

About 25,000 fans attended the host team's game against Belgium as restrictions began to ease in the country. Only about 16,000 were allowed inside the stadium for Denmark's opening match against Finland.

The head of the Danish Agency for Patient Safety said the people were infected independently of each other and were infected during the game.

"They did not get symptoms until three or four days later, which means that there must have been some kind of unknown source of infection present in the section where they sat," Anette Lykke Petri told Danish broadcaster DR.

Denmark has reported 249 case of the delta variant since April 2.

"In our risk assessment, we have expected somewhere between 10 to 20 infected," Rydahl said.

"We trace persons that way that every ticket holder needs to register with their name and contact details so we know for each seat who has been sitting there," Rydahl added. "Then we can provide those data through the ticketing system to the authorities."

The Danish Patient Safety Authority said there is no recommendation to go in isolation.

Copenhagen will host one more match at Euro 2020 on Monday in the round of 16. Spain will face Croatia in that game. Denmark next plays against Wales in Amsterdam on Saturday.

The cases in Copenhagen and Finland are among the most notable virus intrusions on Euro 2020, which was postponed after the pandemic was declared last year.

Only a few players from the 24 teams have tested positive and missed games. England players Mason Mount and Ben Chilwell had to self-isolate as close contacts of Scotland midfielder Billy Gilmour, who tested positive for COVID-19. The three Chelsea teammates had a long talk in the tunnel after their teams played last Friday in London.

RELATED: Delta variant may soon be the most common COVID-19 strain in North Texas, doctors say

UEFA used the first day of no games at Euro 2020 since June 11 to update on managing virus risks.

Asked how Gilmour got the virus within the tournament bubble, Euro 2020 chief medical officer Dr. Zoran Bahtijarević said it was "extremely hard to trace where the infection happened, almost impossible."

"So far we did not really find any unusual results, any unusual peaks," he said, "that are connected with the mass event."