COVID-19 boosters could be ready by September

President Joe Biden announced on Wednesday plans to get boosters to fully vaccinated Americans as soon as the week of Sept. 20.

WASHINGTON - President Joe Biden on Wednesday confirmed that any adult American who has been fully vaccinated for COVID-19 should be eligible to get a booster shot approximately eight months after they received their second dose.

"The plan is for every adult to get a booster shot eight months after you got your second shot. Pending approval from the Food and Drug Administration, the CDC’s committee of outside experts, we’ll be ready to start this booster program during the week of September 20 at which time, anyone vaccinated on or before January 20, will be eligible to get a booster shot," Biden said.

Boosters are "the best way to protect ourselves from new variants that could arise," Biden added.

The president noted that his administration has "prepared for this scenario" for months and the U.S. has an ample supply to administer boosters for anyone who is fully vaccinated.

During the White House COVID-19 press conference on Wednesday, health experts outlined plans for COVID-19 booster shots, not just for immune-compromised individuals, but for fully vaccinated individuals as well.

The president went on to say that in the coming fall and early winter seasons, America will administer another 100,000 booster shots and will donate another 200 million vaccines to other countries.

"The threat of the delta virus remains real, but we are prepared. We have the tools, we can do this," Biden concluded.

Meanwhile, U.S. health officials on Wednesday recommended all Americans get COVID-19 booster shots to bump up their protection amid the surging delta variant and evidence that the vaccines' effectiveness is falling.

The plan, as outlined by the director of the U.S. Centers for Disease Control and Prevention and other top authorities, calls for an extra dose eight months after people receive their second shot of the Pfizer or Moderna COVID-19 vaccine. The doses could begin the week of Sept. 20.

"Our plan is to protect the American people, to stay ahead of this virus," CDC Director Dr. Rochelle Walensky said in a statement.

Health officials said people who received the single-dose Johnson & Johnson vaccine will likely need extra shots. But they said they are awaiting more data and have yet to work out a plan.

The overall plan is subject to a Food and Drug Administration evaluation of the safety and effectiveness of a third dose, the officials said.

In a statement, health officials said it is "very clear" that the vaccines' protection against infection wanes over time, and now, with the highly contagious delta variant spreading rapidly, "we are starting to see evidence of reduced protection against mild and moderate disease."

"Based on our latest assessment, the current protection against severe disease, hospitalization and death could diminish in the months ahead," they said.

Here’s a look at what’s known about boosters and how they could help fight the pandemic:

It’s common for protection from vaccines to decrease over time. A tetanus booster, for example, is recommended every 10 years.

Researchers and health officials have been monitoring the real-world performance of the COVID-19 vaccines to see how long protection lasts among vaccinated people. The vaccines authorized in the U.S., which include the two-dose shots by Pfizer-BioNTech and Moderna, as well as a one-dose shot by Johnson & Johnson, continue to offer very strong protection against severe disease and death.

But laboratory blood tests have suggested that antibodies — one of the immune system's layers of protection — can wane over time. That doesn't mean protection disappears, but it could mean protection is not as strong or that it could take longer for the body to fight back against an infection.

The delta variant has complicated the question of when to give boosters because it is so much more contagious and much of the data gathered about vaccine performance is from before the delta variant was widely circulating. Delta is taking off at the same time that vaccine immunity might also be waning for the first people vaccinated.

In making the announcement on boosters, the CDC on Wednesday released three studies conducted during the delta surge that suggest that the COVID-19 vaccines remain highly effective at keeping Americans out of the hospital but that their ability to prevent infection is dropping markedly among nursing home patients and others.

One that spoke most directly to a possible need for boosters was a look at reported infections in residents of nearly 15,000 nursing homes and other long-term care facilities. It found that the effectiveness of the Pfizer and Moderna vaccines against COVID-19 infection dropped, from about 74% in March, April and early May to 53% in June and July.

The researchers said it was not clear how much of the decline is attributable to the delta variant and how much might be due to a more general weakening of immunity that could have been occurred against any strain.

The study looked at all COVID-19 infections, with or without symptoms. The researchers said more work is needed to determine if there was a higher incidence of infections that resulted in severe illness.

Another one of the studies looked at hospitalizations at 21 hospitals. It found that vaccine effectiveness against COVID-19-associated hospitalization in inoculated people was 86% at two to 12 weeks after the second dose, and 85% at 13 to 24 weeks after.

The third study found that protection against hospitalizations stayed steady at about 95% over the nearly three months studied. But vaccine effectiveness against new laboratory-confirmed infections for all adults in New York state declined from about 92% in early May to about 80% in late July.

The researchers said they are not certain why the decline occurred, but they noted it coincided with the delta variant as well as an easing of social distancing and mask rules.

Meanwhile, Israel is offering a booster to people over 50 who were vaccinated more than five months ago. France and Germany plan to offer boosters to some people in the fall. The European Medicines Agency said it too is reviewing data to see if booster shots are needed.

When would a COVID-19 booster shot be given?

It depends on when a person received their initial COVID-19 vaccine shots. Health officials are recommending that people get an extra dose eight months after getting their second shot of the Pfizer or Moderna vaccine — which could begin the week of Sept. 20.

Officials are continuing to collect information about the one-dose J&J vaccine, which was authorized for use in the U.S. in late February, to determine when to recommend boosters.

Who would receive a COVID-19 booster?

The first people vaccinated in the United States would likely be first in line for boosters too, which would include health care workers, nursing home residents and other older Americans. Many in this group were the first to be vaccinated once the shots were authorized in December 2020.

Overall, more than 168 million people — or 50.9% of the total U.S. population — have been fully vaccinated, data from the U.S. Centers for Disease Control and Prevention shows. Among those in the population who are 12 and older and currently eligible for the shot, the fully vaccinated figure increases to 59.5%. 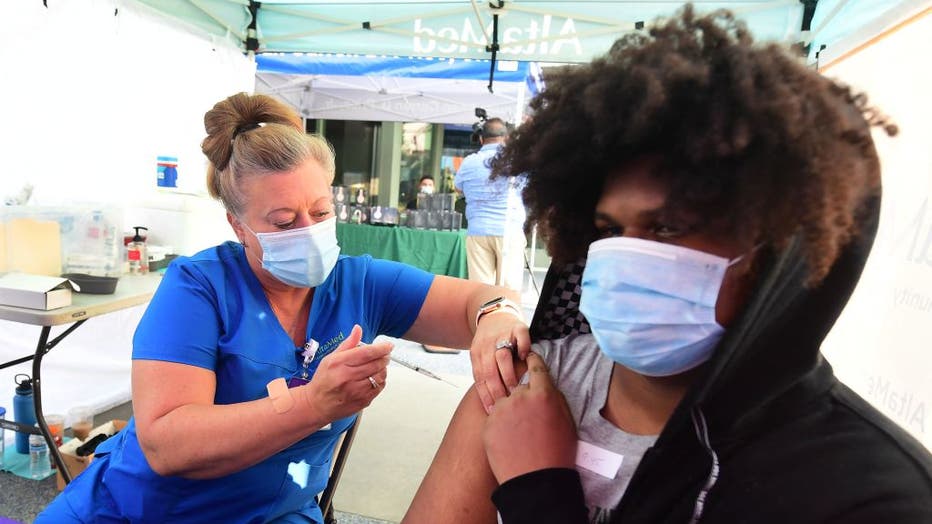 What’s the difference between a COVID-19 booster and a third shot?

Transplant recipients and other people with weakened immune systems may not have received enough protection from the COVID-19 vaccines to begin with. Last week, U.S. health officials recommended boosters for this group, and they can now receive a third dose at least 28 days after their second shot as part of their initial series of shots needed for them to be fully vaccinated.

For those with normal immune systems, boosters are given much later after full vaccination — not to establish protection, but to rev it up again.

What questions about COVID-19 boosters remain?

It’s still unknown whether people should get the same type of COVID-19 shot they received when first vaccinated. The nation’s top health advisers will be looking for evidence about the safety of boosters and how well they protect against infection and severe disease.

International health officials, including the World Health Organization, have called on wealthier and more-vaccinated countries to hold off on booster shots to ensure the supply of first doses for people in poor corners of the world.

"We’re planning to hand out extra life jackets to people who already have life jackets, while we’re leaving other people to drown without a single life jacket," said Dr. Michael Ryan, the WHO’s emergencies chief, said Wednesday amid the announcement of the U.S. plan.

But White House press secretary Jen Psaki this week said the question of whether to distribute boosters or help other nations "is a false choice. We can do both."

She said the U.S. is "far and away" the biggest contributor to the global fight against COVID-19 and will "continue to be the arsenal for vaccines" to the world.

What about the unvaccinated?

Some experts have expressed concern that calling for boosters would undermine the public health message — and reinforce opposition to the vaccine — by raising more doubts in the minds of people who have been skeptical about the shots' effectiveness.

Still, Dr. Melanie Swift, who has been leading the vaccination program at Mayo Clinic in Rochester, Minnesota, said getting more shots into people who haven't yet been vaccinated at all is "our best tool, not only to prevent hospitalization and mortality from the delta variant, but to stop transmission."

Every infection "gives the virus more chances to mutate into who knows what the next variant could be," Swift said.

"People who took the vaccine the first time are likely to line up and get their booster," she continued. "But it’s not going to achieve our goals overall if all their unvaccinated neighbors are not vaccinated."

RELATED: COVID-19 boosters: Some in US getting extra shot without FDA approval