President Donald Trump signed an executive order on Dec. 8, 2020 in which the secretary of Health and Human Services is directed to ensure that Americans have priority access to the vaccine.

WASHINGTON (AP) - Congress sent a temporary government-wide funding bill to President Donald Trump on Friday that would avert a federal shutdown at midnight and buy time for on-again, off-again talks on COVID-19 aid.

The bill sets a new deadline of midnight next Friday. The short-term measure passed the Senate by a unanimous voice vote without much drama and sent senators home for the weekend without a clear picture of what awaits next week. The House passed the bill Wednesday. Trump was expected to sign it before midnight.

The talks are stalled but there is universal agreement that Congress won't adjourn for the year without passing a long-delayed round of pandemic relief. An emerging $900 billion aid package from a bipartisan group of lawmakers hit a rough patch after Senate Majority Leader Mitch McConnell, R-Ky., swung against the effort. Still, negotiations are ongoing anthe d pressure remains intense.

RELATED: Senate approves defense bill, sends to Trump despite his threats to veto it

The House has recessed for a few days, with leaders warning members to be prepared to return to Washington to vote on the year-end deals.

Negotiators on a separate $1.4 trillion catchall spending bill appeared to be moving in a positive direction, said the chairman of the Senate Appropriations Committee, Sen. Richard Shelby, R-Ala.. This bill would serve as a vehicle to carry any year-end virus assistance.

The breakdown over the aid package is a Capitol Hill head-scratcher. Trump has renewed a push for a fresh round of stimulus checks for Americans, proposing $600 per individual rather than the $1,200 that was sent out this spring. Cost concerns are responsible for the smaller amount.

Sending direct cash payments to households was not included in the bipartisan proposal or a lower cost plan from Senate Republicans that has failed twice. The idea of another round of cash but has been embraced by some of the president's fiercest critics — including Rep. Alexandria Ocasio-Cortez, D-N,Y., and Sen. Bernie Sanders, I-Vt.

“We're not going to go home for the Christmas holidays unless we make sure that we provide for the millions of families in this country who are suffering," Sanders said.

House Speaker Nancy Pelosi, D-Calif., said Congress would keep working up to or even after Christmas to get an agreement. The new Congress is being sworn in on Jan. 3.

A key hold up has been the standoff over more money for the states, that Democrats - and some Republicans - want and the liability shield that is McConnell's top GOP priority but that most Democrats oppose.

The bipartisan group tried to marry those two provisions as a compromise. 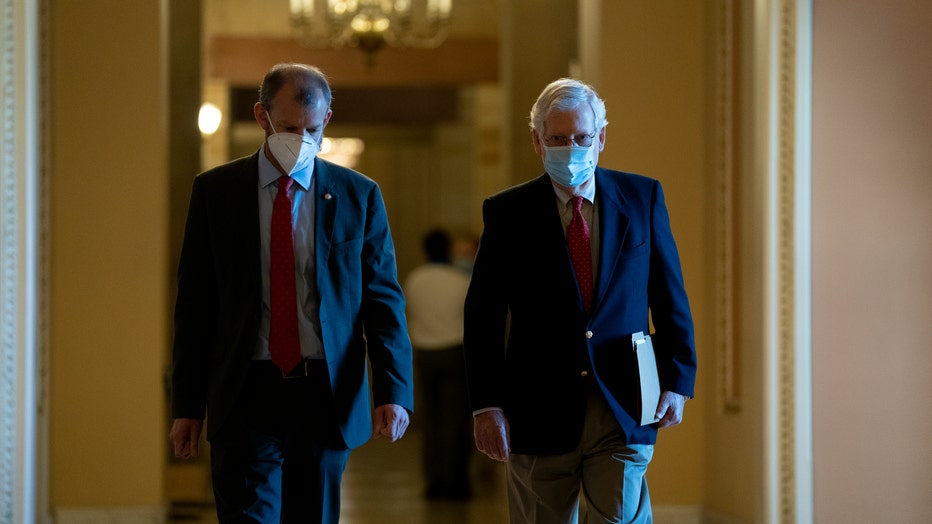 WASHINGTON, DC - DECEMBER 11: Senate Majority Leader Mitch McConnell (R-KY) (R) wears a protective mask while walking to the Senate Floor at the U.S. Capitol on December 11, 2020 in Washington, DC. Lawmakers are facing a midnight deadline to pass a c

McConnell had initially proposed a five-year liability shield from virus lawsuits, retroactive to December 2019, but the bipartisan group was eyeing a scaled-back shield of six months to a year. Labor and civil rights groups oppose any shield, which they say strips essential workers of potential legal recourse as they take risks during the pandemic.

Democratic leaders had wanted far more in state and local aid, but were accepting of the lower $160 billion.

But many Republicans have long viewed the state and local aid as a bailout they would have trouble supporting, despite the pleas for funds coming from governors and mayors nationwide.

Late Thursday, Sen. Dick Durbin and other Democrats pitched another liability proposal to the bipartisan group, but it was rejected by Republicans, according to a Senate aide granted anonymity to discuss the private session.

The Trump administration is back in the middle of the negotiations with a $916 billion plan. It would send a $600 direct payment to most Americans but eliminate a $300-per-week employment benefit favored by the bipartisan group of Senate negotiators.

The White House offer has the endorsement of the top House Republican and apparent backing from McConnell. Democrats oppose the plan in part because of the administration's refusal to back the partial restoration, to $300 per week, of bonus pandemic jobless benefits that lapsed in August.