Video shows damage to a high-rise apartment building after the area was attacked by Russian soldiers. Credit: Dmytro Antoniuk via Storyful

KHARKIV, Ukraine - Ukrainian forces fought Saturday to hold off a Russian advance in their country’s south and east, where the Kremlin is seeking to capture the industrial Donbas region and Western military analysts said Moscow’s offensive was going much slower than planned.

The United Nations continued trying to broker an evacuation of civilians from the increasingly hellish ruins of Mariupol, a southern port city that Russia has sought to capture since it invaded Ukraine more than nine weeks ago.

Citizens are "begging to get saved" from a steel plant that has become Mariupol’s last defense stronghold, Mayor Vadym Boichenko said Friday. "There, it’s not a matter of days. It’s a matter of hours." An estimated 2,000 fighters were holed up in the plant with about 1,000 civilians.

Two Ukrainian women whose husbands are members of the Azov Regiment of Ukraine’s National Guard said they feared soldiers will be tortured and killed if left behind and captured by the Russians. They asked for a Dunkirk-style mission to evacuate the fighters, a reference to the World War II operation launched to rescue surrounded Allied troops in northern France.

"We can do this extraction operation ... which will save our soldiers, our civilians, our kids," Kateryna Prokopenko, 27, told The Associated Press. "We need to do this right now, because people — every hour, every second — are dying." 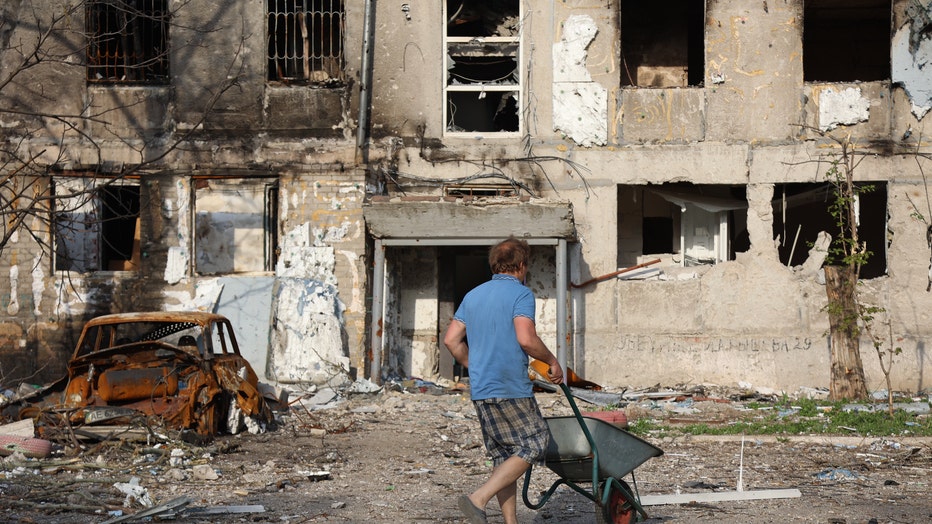 MARIUPOL, UKRAINE - APRIL 29: A view of destruction in the Ukrainian city of Mariupol under the control of Russian military and pro-Russian separatists, on April 29, 2022. (Photo by Leon Klein/Anadolu Agency via Getty Images)

Getting a full picture of the unfolding battle in the east has been difficult because airstrikes and artillery barrages have made it extremely dangerous for reporters to move around. Both Ukraine and the Moscow-backed rebels fighting in the east also have introduced tight restrictions on reporting from the combat zone.

Numerically, Russia’s military manpower vastly exceeds Ukraine’s. In the days before the war began, Western intelligence estimated Russia had positioned near the border as many as 190,000 troops; Ukraine’s standing military is about 200,000, spread throughout the country.

But so far, Russia’s troops and the separatist forces appeared to have made only minor gains in the Donbas in the month since Moscow said it would focus its military strength in eastern Ukraine.

In part because of the tenacity of the Ukrainian resistance, the U.S. believes the Russians are "at least several days behind where they wanted to be" as they try to encircle Ukrainian troops in the east, said a senior U.S. defense official who spoke on condition of anonymity to discuss the American military’s assessment.

The British Defense Ministry offered a similar assessment in its daily assessment of the war, saying it believes Russian forces in Ukraine are likely suffering from "weakened morale," along with a lack of unit-level skills and "inconsistent air support." It did not say on what basis it made the evaluation.

Despite the village-by-village nature of the fight to gain ground in the Donbas, Russia’s promised offensive still could materialize. Overall, the Russian army has an estimated 900,000 active-duty personnel. Russia also has a much larger air force and navy than Ukraine and possesses tactical nuclear weapons.

In Mariupol, around 100,000 people were believed to still be in the city with little food, water or medicine. U.N. spokesman Farhan Haq said the organization was negotiating with authorities in Moscow and Kyiv to create the conditions for safe passage.

Ukrainian officials have estimated that about 2,000 of their troops are inside the plant in Mariupol, along with about 1,000 sheltering in the facility’s underground tunnels. Credit: Azov Battalion via Storyful

For those who are in the Soviet-era Azovstal steel plant, a vast underground network of tunnels and bunkers has provided safety from airstrikes. But the situation has grown more dire after the Russians dropped "bunker busters" and other bombs on the plant, the mayor said.

Lavrov, the Russian foreign minister, told Saudi-owned Al-Arabiya TV that the real problem is that "humanitarian corridors are being ignored by Ukrainian ultra-nationals."

Moscow has repeatedly claimed right-wing Ukrainians were thwarting evacuation efforts and using civilians as human shields. The claims have not been verified.

The Azov Regiment helping to defend the steel plant has its roots in the Azov Battalion, which was formed in 2014 by far-right activists at the start of the separatist conflict in eastern Ukraine.

In further comments published Saturday by Xinhua, Lavrov said Russia has evacuated over 1 million people from Ukraine since the war began, including more than 300 Chinese civilians.

The foreign minister offered no evidence to support his claim in the interview. Ukraine has accused Moscow of forcefully sending Ukrainians out of the country.

Lavrov also partly blamed the lack of progress in discussions to end the war on "the bellicose rhetoric and inflammatory actions of Western supporters of the Kyiv regime." Russian state TV nightly features guests suggesting Moscow use nuclear weapons in the conflict. 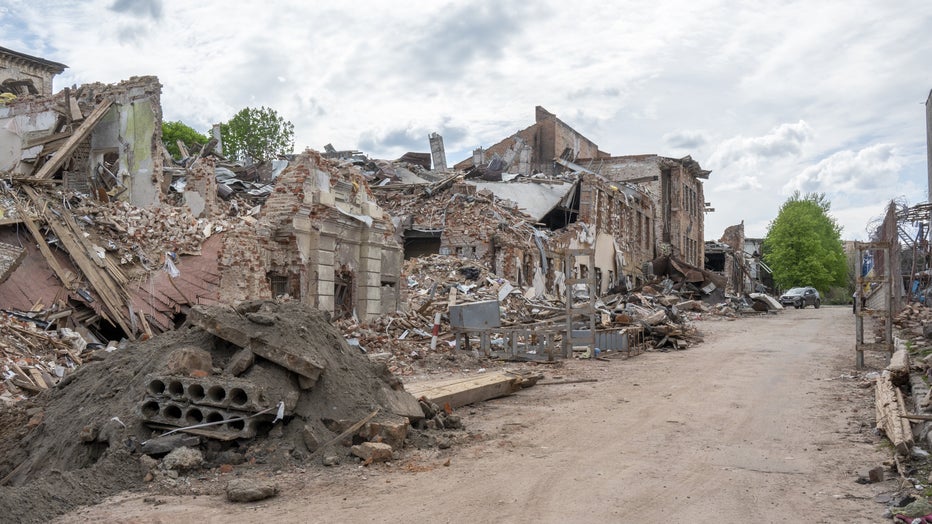 In his nightly video address, Ukrainian President Volodymyr Zelenskyy accused Russia of trying to destroy the Donbas and all who live there.

The constant attacks "show that Russia wants to empty this territory of all people," he said.

"If the Russian invaders are able to realize their plans even partially, then they have enough artillery and aircraft to turn the entire Donbas into stones, as they did with Mariupol," Zelenskyy said.

In a neighborhood on the outskirts of Kharkiv that is regularly shelled by Russian forces, some residents remained in their apartments even though the buildings have charred gaping holes. There is no running water or electricity, so they gather outside to cook on an open flame.

RELATED: 'Uniting for Ukraine': Biden streamlines process to welcome refugees to US

Ukrainian reservists staying in a neighborhood cellar said the Russians have hit the buildings with rockets, artillery and tank fire.

"A tank can come at a short distance and fire all of its ammunition on residential areas. It doesn’t care where. And it’s impossible to figure out where it will fire," said Vladislav, who like others in the unit would only give his first name. 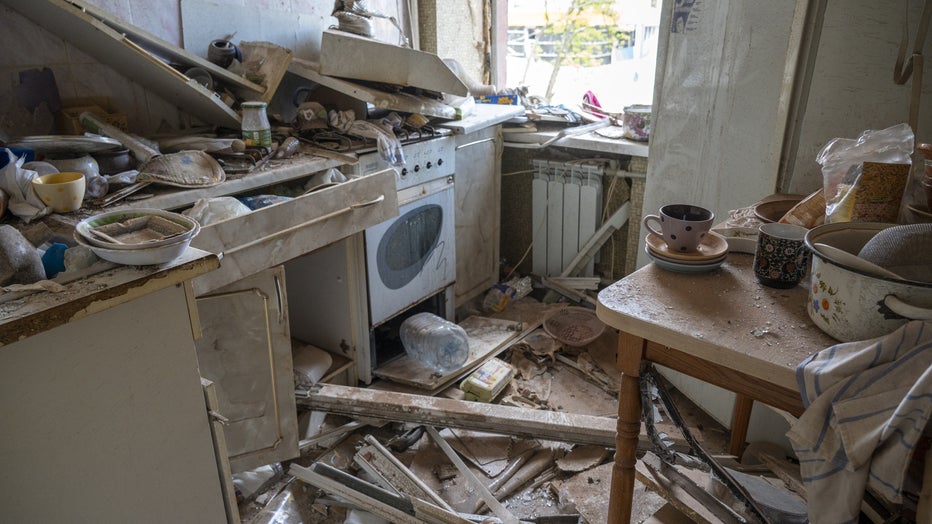 Another reservist, who goes by the nickname Malysh, expressed frustration that he wasn’t able to do more to stop the Russian advance.

"I took up arms, but unfortunately I can’t catch flying missiles with my bare hands and throw them back," he said.

In the nearby village of Ruska Lozava, hundreds of people were evacuated after Ukrainian forces retook the city from Russian occupiers, according to the regional governor. Those who fled to Kharkiv spoke of dire conditions under the Russians, with little water or food and no electricity.

"We were hiding in the basement. It was horror. The basement was shaking from the explosions. We were screaming, we were crying and we were praying to God," resident Ludmila Bocharnikova said.