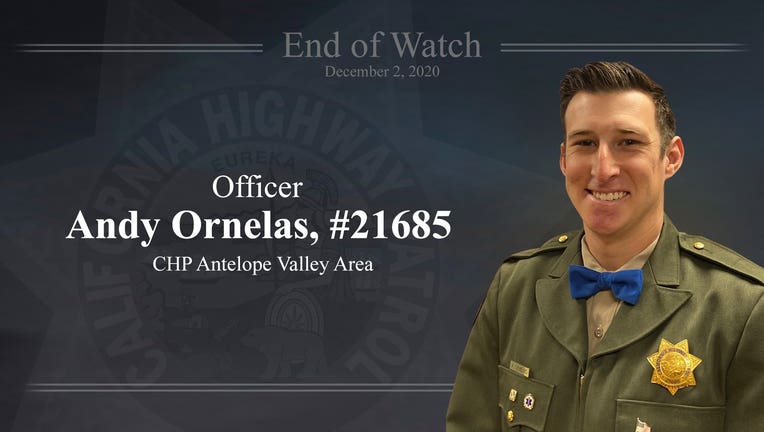 ANTELOPE VALLEY, Calif. - A California Highway Patrol motorcycle officer has died just over a week after he was involved in a collision while responding to a call for service, authorities said Wednesday.

Just after 7 p.m. on Nov. 23, Antelope Valley CHP Officer Andy Ornelas was responding to help parties who were involved in a traffic collision on SR-14. While on his way to the scene, a motorist pulled from the right shoulder to make a U-turn directly in his path. The officer's motorcycle struck the other vehicle, causing him to be thrown from his bike.

Officer Ornelas was transported to Antelope Valley Hospital in Lancaster in critical condition but despite life-saving efforts by medical staff, he succumbed to his injuries on Wednesday.

"With heavy hearts we announce the End of Watch for Antelope Valley CHP Officer Andy Ornelas, ID 21685," the CHP wrote in a post on Facebook.

Officer Ornelas was a member of the department for four years. He is survived by his wife, mother, father, brother, and sister.

FOX 11 has reached out to the CHP to learn whether the driver involved in the crash made an illegal U-turn or whether any charges have been filed in the case and is waiting to hear back.