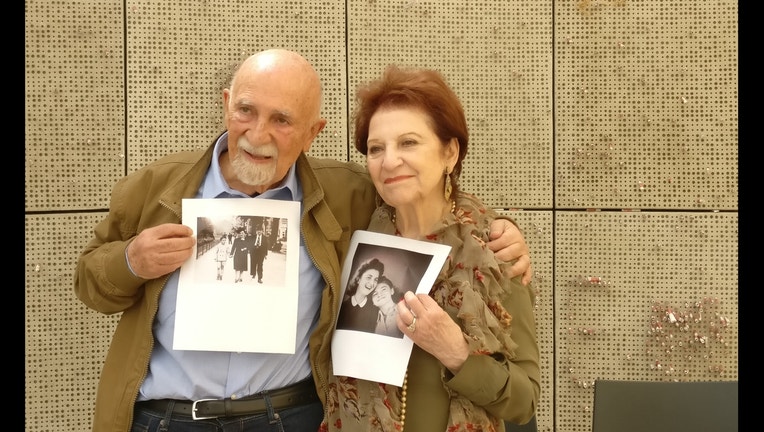 LOS ANGELES (AP) - When Alice Gerstel bid an emotional farewell to her family's closest friends in October 1941, she was hopeful she'd see "Little Simon" Gronowski again. And she did -- 76 years later and half a world away from where they were separated in Brussels.

Gerstel and her Jewish family had hidden in the Gronowskis' home for nearly two weeks before her father sent word from France that he had reached a deal with a smuggler who would get her, her siblings and their mother safely out of Nazi-occupied Belgium.

The Gronowskis, also Jewish, decided to stay. They hid for 18 months until the Nazis came knocking at the family's door and put Simon, his sister and mother on a death train to Auschwitz.

"I thought the entire family was murdered. I had no idea," Gerstel (now Gerstel Weit) said Wednesday, the day after their tearful reunion. She and her friend clutched hands at the Los Angeles Museum of the Holocaust as they recounted their story.

"You didn't know that I jumped off the train?" asked Gronowski, now 86.

She lives in Los Angeles and he lives in Belgium. The met for the first time on Tuesday after 76 years, said museum spokeswoman Jill Brown. The pair will return to the museum Sunday to recount to visitors how the Holocaust ripped apart a pair of families that had become fast friends after a chance meeting at a Belgian beach resort in 1939. How it led an 11-year-old boy to make one of the most daring escapes of the war. How it put the other family on a perilous journey through occupied France that reads like a scene from the film "Casablanca."

And, finally, how those separate journeys culminated three-quarters of a century later in a joyful, tear-streaked reunion in Los Angeles just before Yom HaShoah or Holocaust Commemoration Day.

"I didn't recognize him at all. I don't see Little Simon," Gerstel Weit said Wednesday at the museum of her previous day's reunion with the now-bald, white-bearded man who sat next to her chuckling.

"But he's here. Little Simon is here," she added, her voice breaking as she put her hand over Gronowski's heart.

There was much hugging, kissing and crying Wednesday as the two old friends held hands tightly while sitting outside on a museum patio to share memories from a long-ago past.

It was a past that began idyllically before turning nightmarish after the Nazis invaded Belgium in 1940 and began rounding up Jews.

Gerstel Weit's father, a diamond dealer with a wife and four children, decided to flee in 1941. He turned his diamonds into cash, bought nine visas that got his family and brother's family through Nazi-occupied France and to the French-controlled Moroccan city of Casablanca. There they boarded a ship bound for Cuba.

Gronowski's father believed naively he and his family would be safe hiding in Brussels.

When the Nazis arrived, Gronowski's father was in a hospital. His wife quickly lied, telling them he was dead and sparing him from Auschwitz.

It was on a train to that death camp a few weeks later that she saved her son, pushing him toward the door of the boxcar they were in and telling him to jump.

After the war he reunited with his father and eventually moved back to the apartment where he grew up. He rented out the other units and used the money to pay for law school. He is a practicing attorney in Brussels.

Gerstel Weit's family immigrated to the United States, where she married, had two sons and eventually settled in Los Angeles and a career in real estate.

Immediately after the war, her family tried to locate the Gerstels. Gronowski eventually wrote back to her late older brother Zoltan, telling him his sister and mother had died at Auschwitz and his father had since passed away. For some reason, Zoltan never told his family "Little Simon" survived.

She learned he was alive six months ago when her nephew searched her maiden name online looking for more family history. He came across Gronowski's 2002 memoir, "The Child of the 20th Train," in which her family is mentioned prominently.

Gronowski says he believes Gerstel Weit's brother was too distraught to say much about his family. His 18-year-old sister, Ita, had been Zoltan Gerstel's girlfriend in Belgium, and he had professed his love for her repeatedly in wartime letters, including somey she never lived to see.

Gronowski's own father could never come to grips with the Holocaust either, he said. For a time, Leon Gronowski held out hope his wife and daughter somehow survived and he would find them.

"But when we received information of the concentration camps, the gas chamber, the mountains of corpses, my father understood that his wife and his daughter would not come back. And he died of ...," he said, his voice trailing off.

"Of a broken heart," he replied.