The director of the U.S. Centers for Disease Control and Prevention said on Monday that the agency will extend an order which prohibits noncitizens migrating through Mexico and Canada from entering the United States in an effort to slow the spread of COVID-19.

The order, which was first enacted in March of 2020, is under the Public Health Service Act (Title 42) which gives federal health officials unique powers during a pandemic to take extraordinary measures to limit transmission of an infectious disease. One of those is the ability to stop the flow of immigration from countries with high numbers of confirmed cases, a legal authority the CDC does not normally have.

Since it was enacted, Title 42 has been a point of contention, with many critics arguing that the order is cruel and inhumane. 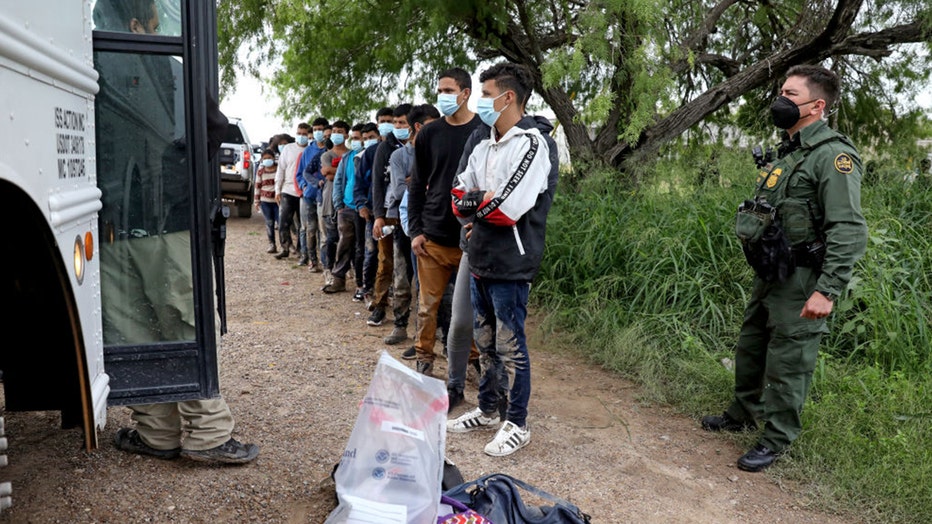 FILE - U.S. Border patrol, right, with migrants who crossed the U.S.-Mexico border illegally, wait to be loaded on a bus to be processed by U.S. Border Patrol.

President Joe Biden has faced criticism from progressives for keeping asylum off-limits to many and creating policies that encourage parents to send children across the border alone. Enforcement-minded critics say exempting unaccompanied children from expulsion led to record numbers crossing the U.S.-Mexico border and that further lifting restrictions will invite many more people to come.

Immigration advocates have ratcheted up pressure to end expulsions entirely, arguing that they cannot be defended solely on the grounds of protecting public health. Migrants at the southern border are typically expelled to Mexico within two hours of getting picked up by Border Patrol agents.

DHS had announced that as of July 31, 2021, the agency would consider ending Title 42 enforcement, but the consideration changed with the surge in COVID-19 cases among mostly unvaccinated people.

U.S. Homeland Security Secretary Alejandro Mayorkas testified about the order in Congress in May of 2021, stating that Title 42 is "not a tool of immigration, it is a tool of public health" authorized by the CDC.

U.S. authorities likely picked up more than 19,000 unaccompanied children in July, exceeding the previous high of 18,877 in March, according to David Shahoulian, assistant secretary for border and immigration policy at the Department of Homeland Security. The June total was 15,253.

Overall, U.S. authorities stopped migrants about 210,000 times at the border in July, up from 188,829 in June and the highest in more than 20 years. But the numbers aren't directly comparable because many cross repeatedly under a pandemic-related ban that expels people from the country immediately without giving them a chance to seek asylum but carries no legal consequences.

According to Immigration and Customs Enforcement (ICE), one-third of immigrants detained have refused the opportunity to receive a COVID-19 vaccine, according to agency statistics. An ICE official confirmed to FOX News that the vaccine declination rate in all ICE detention centers was 30% in July.

Those are still well below the 3,400 deaths and a quarter-million cases per day seen during the worst of the outbreak, in January. But some places around the country are watching caseloads reach their highest levels since the pandemic began. And nearly all deaths and serious illnesses now are in unvaccinated people.

The surge has led states and cities across the U.S. to beat a retreat, just weeks after it looked as if the country was going to see a close-to-normal summer.

In the Deep South, Louisiana ordered nearly everyone, vaccinated or not, to wear masks again in all indoor public settings, including schools and colleges And other cities and states likewise moved to reinstate precautions to counter a crisis blamed on the fast-spreading variant and stubborn resistance to getting the vaccine.

"As quickly as we can discharge them they’re coming in and they’re coming in very sick. We started seeing entire families come down," lamented Dr. Sergio Segarra, chief medical officer of Baptist Hospital Miami. The Florida medical-center chain reported an increase of over 140% in the past two weeks in the number of people now hospitalized with the virus.

Biden had set a vaccination goal of 70% of adults 18 and up having received at least one shot by the Fourth of July. That figure was the low end of initial government estimates for what would be necessary to achieve herd immunity in the U.S. But that has been rendered insufficient by the highly contagious delta variant, which has enabled the virus to come storming back. The U.S. just reached Biden’s 70% vaccination goal this week, nearly a month late.

Dr. Anthony Fauci warned Sunday that more "pain and suffering" is on the horizon as COVID-19 cases climb again and officials plead with unvaccinated Americans to get their shots.

Fauci's warning came days after the CDC changed course to recommend that even vaccinated people return to wearing masks indoors in parts of the U.S. where the delta variant is fueling infection surges. With the switch, federal health officials have cited studies showing vaccinated people can spread the virus to others.

"So we’re looking, not, I believe, to lockdown, but we’re looking to some pain and suffering in the future because we’re seeing the cases go up, which is the reason why we keep saying over and over again, the solution to this is get vaccinated and this would not be happening," Fauci said on ABC's "This Week."