TORONTO - The Canadian government designated the Proud Boys group as a terrorist entity on Wednesday, noting they played a pivotal role in the insurrection at the U.S. Capitol on Jan. 6.

The Proud Boys have faced increased scrutiny after seizing on the former Trump administration’s policies and was a major agitator during earlier protests and the Capitol riot on Jan. 6. The Proud Boys is a far-right, male chauvinist extremist group known for engaging in violent clashes at political rallies. Canada is the first country to designate them as a terrorist entity.

During a September presidential debate, Donald Trump had urged them to "stand back and stand by" when asked to condemn them by a moderator.

A Canadian government senior official said the Jan. 6 insurrection at the U.S. Capitol contributed to the designation. 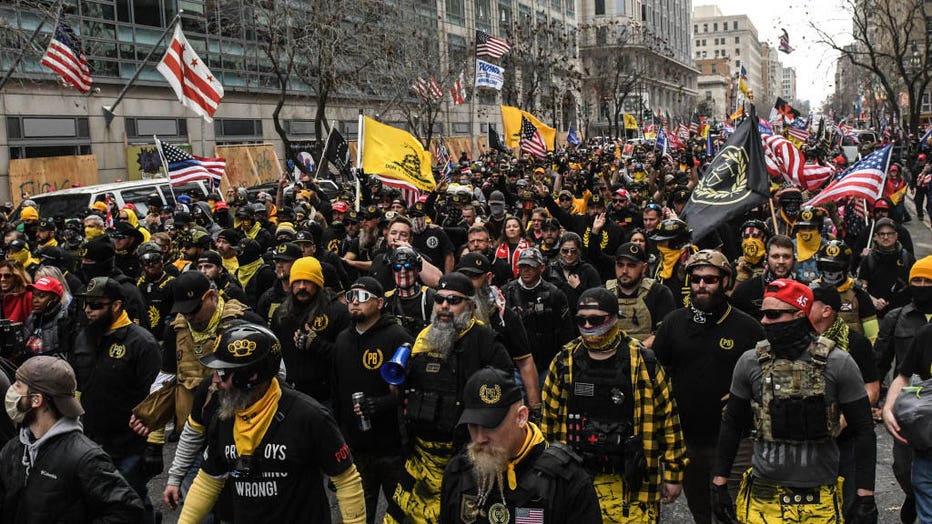 Members of the Proud Boys march towards Freedom Plaza during a protest on Dec. 12, 2020 in Washington, D.C. (Photo by Stephanie Keith/Getty Images)

The terrorist designation means the group may have assets seized and face harsher terrorism-related criminal penalties. A government official said just because they are a member doesn't mean they will be charged with a crime, but if they do engage in violent acts they could be charged with terrorist crimes.

Sending money to the organization or buying Proud Boys paraphernalia would also be a crime.

"The group and its members have openly encouraged, planned, and conducted violent activities against those they perceive to be opposed to their ideology and political beliefs," the Canadian government said in briefing materials.

The government calls the Proud Boys a neo-fascist organization with semiautonomous chapters located in the United States, Canada, and internationally. It said it engages in political violence and that members espouse misogynistic, Islamophobic, anti-Semitic, anti-immigrant, and white supremacist ideologies.