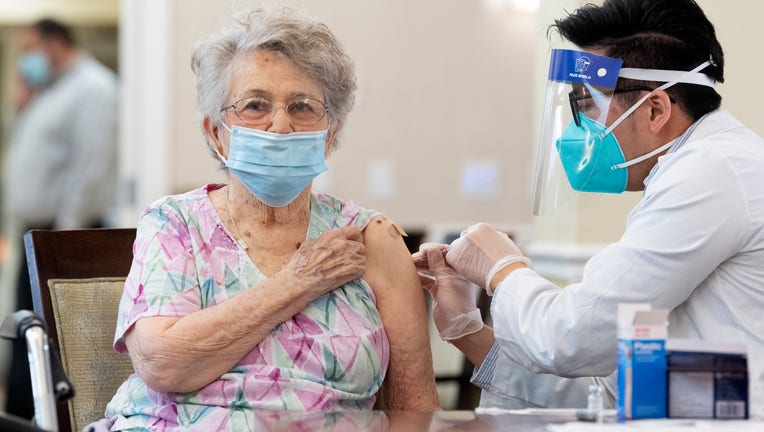 LOS ANGELES - People aged 65 and older and those with serious underlying health conditions in LA and across California could quickly become eligible for a COVID-19 vaccine.

Dr. Mark Ghaly, the state's Health and Human Services secretary, said the change could be implemented within 24 hours. He said California's vaccine advisory committee and a prioritization guidelines workgroup are already reviewing the suggested guidelines.

RELATED: When will the general public get the COVID-19 vaccine?

"Those communications have already begun and will go throughout the day so we can evaluate the new federal guidance, determine how it's going to impact what we do here in California and -- with haste without delay -- getting that updated guidance out," Ghaly said. "(I) expect that will come in the next 24 hours or so, so we can let all Californians benefit."

Acting under recommendations initially developed by the U.S. Centers for Disease Control and Prevention, states have given top priority to frontline health care workers to receive the COVID-19 vaccine. Most states are still working to get the shots to health care workers, but the slow pace of administering the shots has led to calls to authorize more people to receive doses.

In California, Gov. Gavin Newsom said Monday the state has only administered about one-third of the nearly 2.5 million vaccine doses it has received so far. Los Angeles County Public Health Director Barbara Ferrer said Monday it would likely take until the end of January to finish vaccinating all health care workers listed in Phase 1A of the priority list.

Ferrer said the county hopes to begin the top priority tier of Phase1B -- people aged 75 and over and select essential workers, such as those in education, child care, emergency services and food and agriculture -- in early February. People aged 65 and older wouldn't be eligible until the second tier of that phase, likely not until late February or early March.

Younger residents with serious underlying health conditions would not be eligible until Phase 1C, which Ferrer said would likely not begin until late March.

The new federal guidance, if adopted by the state, would almost immediately swing the door open for those groups to become immediately available for vaccines.

Mayor Eric Garcetti announced Sunday that testing operations at Dodger Stadium will conclude Monday, and in conjunction with the county, vaccine distribution will begin by the end of the week.

The news comes as several large-scale vaccination sites open in Southern California. Dodger Stadium will open later this week as a drive-the vaccination facility, as will a Disneyland parking area. Petco Park in San Diego is also home to a vaccination clinic.

The state has already loosened vaccine priorities once. Last week it authorized vaccines for all categories of health care workers included in Phase1A of the prioritization plan, not just hospital and other frontline workers at the top of the list.