For this segment of Destination Education, FOX 11's Cristy Fajardo visits the city of Lancaster where prison inmates are earning their college degrees.

LANCASTER, Calif. - Beyond the layers of gates, and the thick walls of the California State Prison, Los Angeles County there is one room where inmates say they don't feel like a prisoner.

We visited the only face-to-face college degree program behind prison walls in California. An armed officer stood watch as a room full of inmates listened intently as Dr. Bidhan Chandra Roy, Ph.D., outlined their next assignment. The Cal-State LA English professor has been volunteering at the prison for eight years, but it wasn't until the inmates asked if they could get real college credit that Dr. Roy got the idea to team up with his university.

"I think there are many men in prison who were written off before they came to prison from the minute they were born," explained Dr. Roy. "Investing in human beings more is not just the right thing to do it makes a better society."

He wasn't sure what his bosses at Cal-State LA would say, after all, the prison in Lancaster is a level 4 maximum-security facility, and houses some of the most dangerous criminals.

Most of Dr. Roy's students at the prison had been convicted of murder or had been hardcore gang members. It just so happened the timing was right.

In the '60s, ‘70s and ’80s federal Pel-grants had been available to inmates to pay for college tuition, but during the '90s, the Clinton Administration did away with the program, then the Obama Administration brought it back. That meant the inmates in Lancaster could apply to cover the nearly $6,000 dollar tuition of attending Cal-State LA. 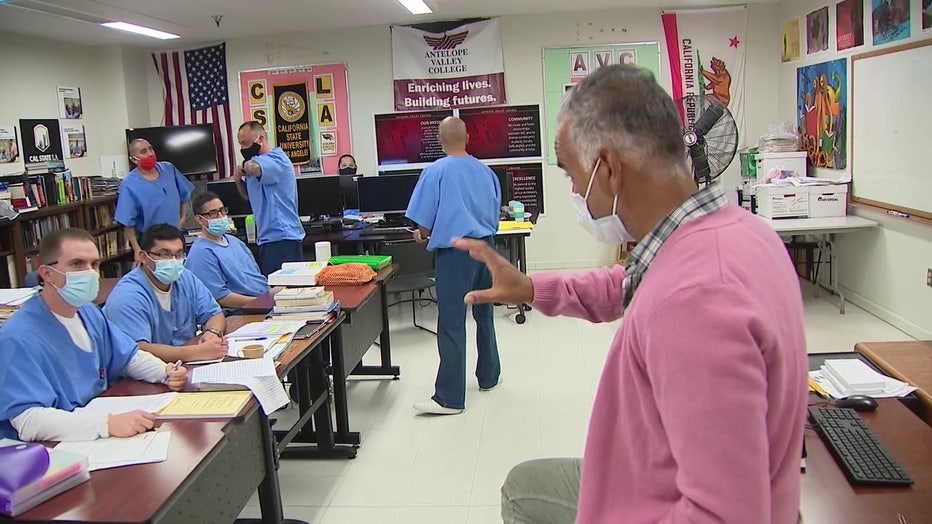 "For me as a ‘life without inmate,’ it shows that it doesn't matter how much time you are doing or what is going on in your life… you can change and that change is real," said Freddie Hernandez, who serving a life sentence without the possibility of parole.

Hernandez is now working towards a Bachelor's degree in communication through CSULA. He says a college education was always something his mother wanted for him.

"My mom is very proud she is an educator herself she has a Ph.D.," he said. "This is my way of giving back to her." 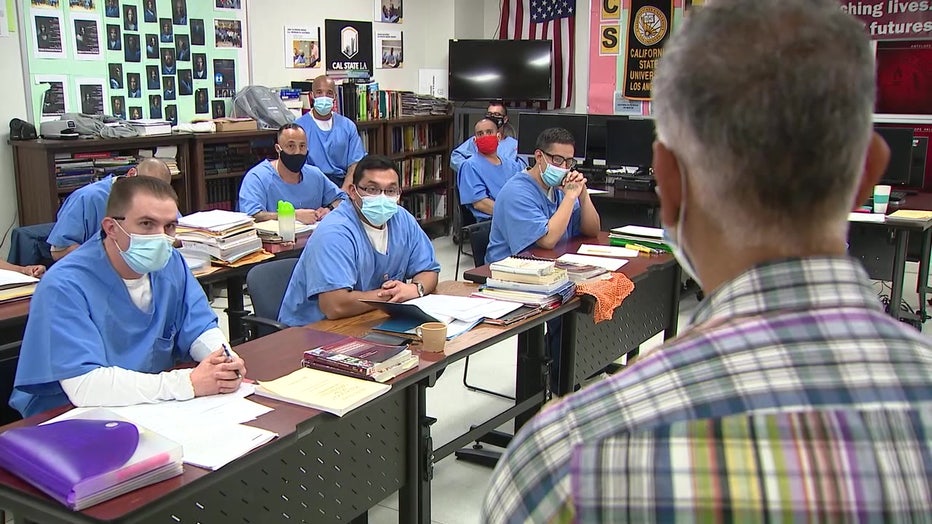 Getting into the program is not a given. The California Department of Corrections and Rehabilitation or CDCR is very selective about who gets the privilege of a college degree. The agency only picks a handful out of a batch of inmates who have already completed an Associates' degree through a correspondence program and have been model inmates for several years.

Dr. Roy says the biggest surprise is how many inmates on the yard have been inspired to better so they too can qualify for the program. He says he gets letters from incarcerated people all over the state who want to study with him.

SUGGESTED: Orange County man, 62, graduates college after decades of drug use and incarceration

"That was a life-defining moment for me," said Deon Whitmore who has been in prison since he was 15 and was part of the first graduating class last month.

He said his wife and brothers were there to see him graduate. He told FOX 11 that his sibling followed his bad example and now he hopes they will follow him to college.

"We've had conversations after that day about maybe this is the way to go now," he said.

If he is paroled in 18 months, he plans on getting a master's degree and working in mental health and addiction.

Darren Robinson was also part of the graduating class, he said his diploma now hangs in his cell so he can stare at it. He is serving a life sentence for murder. He said his degree may not open the prison doors but it opened much more.

"I finally got to hold something in my hands that said you weren't a failure that you did count," Robinson said.

"It's pretty awesome to see some go from a violent person who didn't care about anybody to see them be full of empathy, compassion and accountability," said Thaisan Nguon who was one of 10 inmates whose sentences were commuted during the program.

Now that he is free he finishing his B.A. next month at the Cal-State LA campus.

"It was surreal," he said of the first time he saw Cal-State LA.

He told FOX 11 that he had often imagined what it would feel like. He said his mother who escaped Cambodia's Killing Fields, couldn't be prouder.

"As mothers do, she said 'make sure you get straight A's'," he said.

He entered prison for murder as a 20-year old gang member, but says it was education that removed the shackles around his mind.

"There is still a lot of shame that resides in me for the things I've done when I was a 20 year old," he said. "And I will have that shame for the rest of my life, but to turn it into something positive, I try to do that every day."