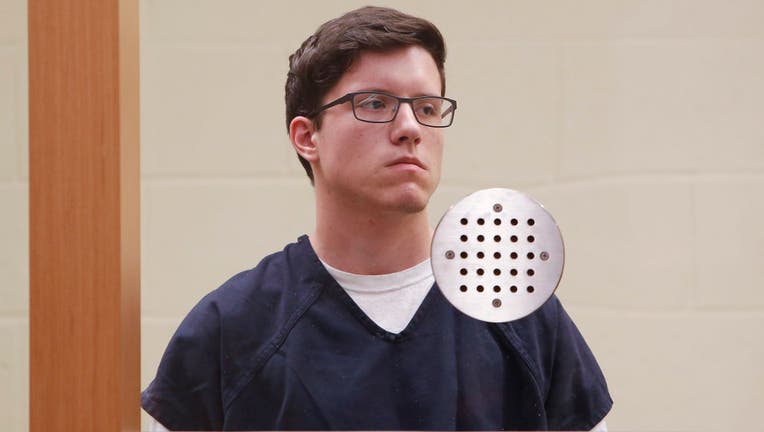 SAN DIEGO, Calif. - A 22-year-old man was sentenced to life in prison without the possibility of parole Thursday for bursting into a Southern California synagogue on the last day of Passover in 2019 with a semiautomatic rifle, killing one worshipper and wounding three others.

An agreement with prosecutors spared John T. Earnest the death penalty, but the hearing gave victims and families their first opportunity to address the killer directly during victim-impact statements in San Diego Superior Court.

Earnest’s attorney said Earnest wanted to make a statement but Judge Peter Deddeh refused, saying he did not want the hearing to become "a political forum" for white supremacist views.

"I’m not going to let him use this as a platform to add to his celebrity," the judge said. There was no visible reaction from Earnest, who stared straight ahead.

Minutes after the shooting, Earnest called a 911 dispatcher to say he shot up the synagogue to save white people. "I’m defending our nation against the Jewish people, who are trying to destroy all white people," he said.

RELATED: Southern California synagogue shooter pleads guilty to all charges against him

The San Diego man admired the gunman who killed dozens of worshippers at two New Zealand mosques shortly before he attacked Chabad of Poway, a synagogue near San Diego, on April 27, 2019. He frequented 8chan, a dark corner of the internet, for those disaffected by mainstream social media sites to post extremist, racist and violent views.

Earnest legally bought a semi-automatic rifle in San Diego a day before the attack, according to a federal affidavit. He entered the synagogue with 10 bullets loaded and 50 more on his vest but fled after struggling to reload.

Earnest killed 60-year-old Lori Gilbert, who was hit twice as she prayed in the foyer, and wounded an 8-year-old girl, her uncle and Rabbi Yisroel Goldstein, who was leading a service on the major Jewish holiday.

The Earnest family issued a statement after the shooting expressing shock and sadness, calling their son’s actions a "terrifying mystery." Their son was an accomplished student, athlete and musician who was studying to be a nurse at California State University, San Marcos.

"(Our) sadness pales in comparison to the grief and anguish our son has caused for so many innocent people," they wrote. "To our great shame, he is now part of the history of evil that has been perpetrated on Jewish people for centuries."

"Our son’s actions were informed by people we do not know, and ideas we do not hold," the family said. "Like our five other children, he was raised in a family, a faith, and a community that all rejected hate and taught that love must be the motive for everything we do."

Earnest also faces sentencing in federal court on Dec. 28. He pleaded guilty to federal charges after the Justice Department said it wouldn’t seek the death penalty. Defense attorneys and prosecutors are recommending a life sentence.