Newsom, Dahle square off in only gubernatorial debate

California Gov. Gavin Newsom and State Sen. Brian Dahle faced off in their only debate Sunday, ahead of the gubernatorial election in November.

SACRAMENTO, Calif. - California Gov. Gavin Newsom on Sunday vowed he would serve a full four-year term if reelected in November, trying again to knock down speculation that he wants to replace Democrat Joe Biden on the ballot should he not seek a second term.

Newsom made the promise during an hourlong debate with his Republican challenger, state Sen. Brian Dahle — the only time the two candidates will meet face to face before voting ends on Nov. 8.

Newsom is expected to easily win reelection in November more than one year after beating back a recall attempt fueled by anger at his pandemic policies — which included the nation’s first statewide stay-at-home order. He has barely campaigned in California this year, instead spending money on ads in challenging Republican leaders in Florida, Texas — potential opponents in a presidential election.

"Everyday Californians understand what is happening here in California and the governor is focused on running for president," Dahle said during a debate that was broadcast live on the radio by KQED News. The debate will air again Sunday night on KQED Public Television.

Asked directly by co-moderator Marisa Lagos if he would commit to serving all four years if he’s reelected, Newsom said "yes." Newsom defended his national campaigning, saying he "barely" left the state to take on national Republican leaders, who he says are banning books and "demeaning" the LGBT community. 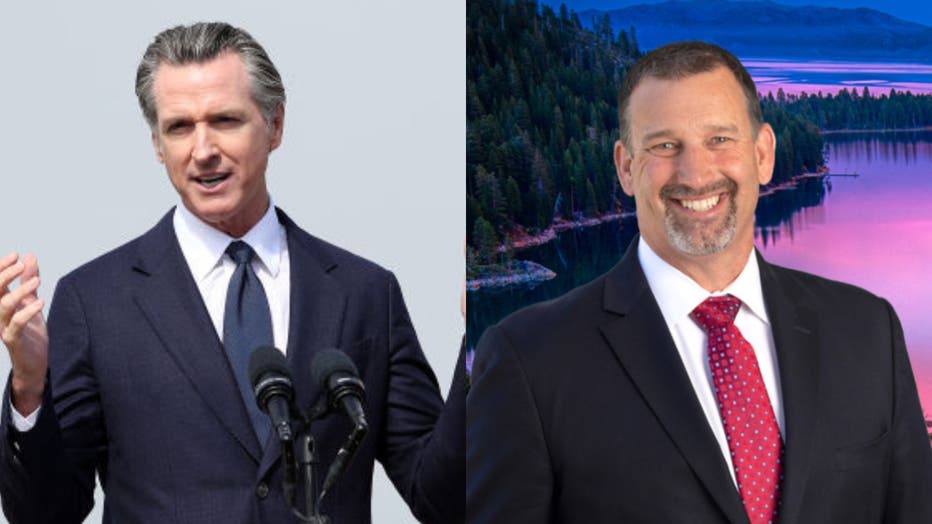 "This is a serious moment in American history," Newsom said. "I’ve had enough. So I’ll proudly and happily stand up."

The debate mostly followed the flow of political messaging from the country’s two major political parties, with Newsom focusing on climate change and abortion rights while Dahle focused on the economy, particularly California’s high cost of living that includes gas prices soaring as much as $2.60 higher than the national average.

Dahle, a farmer from the northwest corner of California who also owns a trucking business, said it cost $200 a day to put diesel fuel in his trucks — a cost he says has increased the price of food. He said California should have used its record budget surplus to suspend the state’s gas tax, which he says would amount to a $1,700 rebate for taxpayers.

"He’s out of touch with everyday, hard working, middle class Californians," Dahle said. "Yes, he and his friends can afford Teslas at $70,000, but Californians on the whole have no opportunity but to just suffer from the policies Gavin Newsom has put forward."

Newsom pushed back, noting he has signed laws sending billions of dollars back to taxpayers since the start of the pandemic, with the latest round of cash hitting taxpayers’ bank accounts this month. That’s far better than suspending the state’s gas tax, Newsom said, because there would be no way to guarantee oil companies would pass the savings along to drivers.

He accused Dahle of voting against those rebates in the state Legislature. Records show Dahle voted for a bill that would implement the tax rebates, but he voted against a broader budget bill that included the money to pay for them.

On abortion, Dahle said he would remove $20 million in the state’s budget that would help pay for women from other states to come to California for the procedure. But he said he would leave money for "reproductive care" in the budget, without detailing what that meant.

The Issue Is: Exclusive with Gov. Newsom in his trip to Washington

This week, "The Issue Is" is on the road, taking the show to Washington, D.C.

He criticized Newsom for supporting Proposition 1, a measure on the ballot this year that would enshrine the right to an abortion in California’s Constitution. Dahle said the amendment, if it passed, would make abortion legal up "to the minute before birth."

Newsom said he wouldn’t "apologize for having the back of women and girls all across this country."

"What my opponent believes is some 10-year-old gets raped by her father should be forced to bear her brother or sister," Newsom said. "His position is extreme."

The debate will likely be the high point of Dahle’s campaign. He’s raised less than $1 million, which isn’t enough to run statewide TV ads in the nation’s most populous state, home to some of the country’s most expensive media markets.

"Every day we are trying to get people to know who I am," Dahle said, adding he plans to drive a truck across the state, holding rallies up until Election Day.