LA Mayoral candidates face off in another debate

LOS ANGELES - Before candidates for Los Angeles Mayor even had the opportunity to debate Sunday night, a California State University, Los Angeles professor was removed from the auditorium, according to reports.

Dr. Melina Abdullah is a professor with and the former chair of CSULA's Department of Pan-African Studies, as well as one of the original organizers that formed the Black Lives Matter movement. She says she was removed from the auditorium on CSULA's campus ahead of Sunday's debate.

The debate, put on by the Pat Brown Institute for Public Affairs was scheduled to kick off at 5:30 p.m. Ahead of the event, videos posted to social media showed a commotion in the back of the auditorium. In a video posted to Twitter by Los Angeles Times reporter Jeong Park, a person is seen in one of the back rows of the auditorium, talking with what look to be either security or police officers, before they forcibly remove the person from their seat.

Abdullah later claimed to be the person in the video, reposting it along with her own tweet.

"Today I attempted to watch the mayoral debate held on the campus where I’ve taught for 20 years," Abdullah tweeted. "As I waited for it to start, the white [Pat Brown Institute] director called the police on me. He and each of the candidates watched as I was brutally removed." 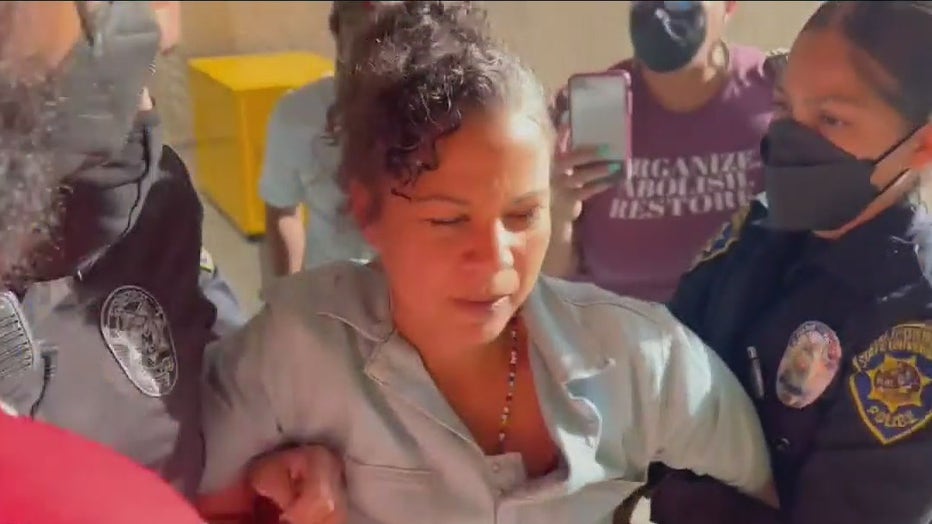 Another video from outside the venue showed officers escorting Abdullah from the building, while bystanders demanded to know what was happening.

"Professor Melina Abdullah and her companion were not on the guest list or media list for the event. They bypassed all on-site check-ins and entered the theatre. An event organizer informed the pair twice that they could not remain. The two did not leave. When public safety officers asked them to leave, Professor Abdullah's companion complied. When Professor Abdullah ignored requests to leave, she was removed from the building by public safety officers and immediately released," said the university, which initially declined to comment, saying it would wait until it conducted a full review.

"Professor Abdullah's race and group affiliation were not factors in this incident. Others who were not on the media or guest lists were not allowed into the theatre," it added.

Rep. Bass, and de León, whom Dr. Abdullah had specifically called out as she was being removed from the auditorium, also issued statements to City News Service Monday.

"With the stage lights blasting full force, it was impossible to see who was in the audience. And given the ongoing interruptions at debates and other events, it seemed like more of the same from the usual suspects," de León said.

"To learn later that it was my friend and former professor was deeply upsetting," he added.

Bass simply said, "I couldn't see, I had no idea who was being removed."

In response to FOX 11's request for comment, Cal State LA's Public Affairs office said simply, "The university will provide a statement after a full review of the incident."

Mail-in ballots for the June 7 primary election go out to voters in just days.