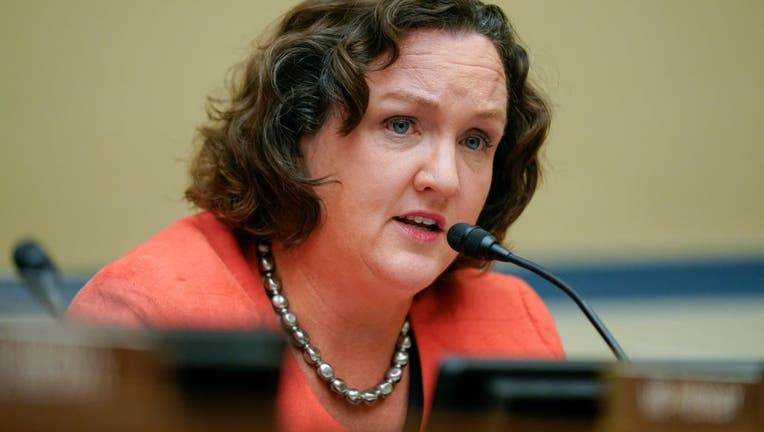 The office of Rep. Katie Porter, D-Calif., denied firing a staffer in July for violating "office protocols" by catching COVID-19.

Screenshots of text messages between Porter and her former Wounded Warrior program fellow, Sasha Georgiades, were published by the Dear White Staffers Twitter account on Thursday.

The post said the text messages were shared "with permission" from the staffer who shared them and detail a conversation between Porter and Georgiades over the office's COVID-19 protocols.

Georgiades was Porter's staffer for two years and departed the office in August.

Porter's office denied Georgiades was fired for catching COVID-19 in a statement to Fox News Digital.

"This former employee was not fired. She was a fellow in our office, and weeks before she breached COVID protocol in July, we had already mutually agreed on an end date in August 2022," a Porter spokesperson wrote.

"Congresswoman Porter was informing her that she would work from home for the remaining three weeks of her fellowship," the spokesperson continued. "Following knowledge of COVID exposure, Congresswoman Porter tested twice daily and only attended in-person gatherings after negative results."

According to the published texts, Porter asked Georgiades on July 8 why she did "not follow office protocol on testing" for COVID-19, calling it "really disappointing."

"I'm terribly sorry. You're right, I should have done better," Georgiades responded the same day. "Just because I felt okay in the moment doesn't mean that I was."

"Sasha— I cannot allow you back in the office, given your failure to follow office policies," Porter wrote the next day on July 9. "Cody will be in touch about having your personal effects shipped or delivered to your home, and will lay out your remote work schedule and responsibilities for your last few weeks."

"I understand. Thank you for the last two years and all that I have learned," Georgiades responded. "I hate to have disappointed you in the manner, as I know it isn't an excuse I had found out my friend from the Navy had been murdered and my head was not in the best place."

"Not an excuse but the reasoning for the lack of forethought," she continued. "I appreciate everything this office has done for me."

Porter responded to Georgiades, writing, "you gave me Covid" and that in "25 months, it took you not following the rules" to get her sick.

The California congresswoman then said her "children have nobody to care for them."

Porter has a history of controversial text messages that have surfaced, such as her beratement of Irvine, California, Mayor Farrah Khan after the congresswoman trashed the Irvine police department following her violent town hall last year.

In the texts, Porter criticized Khan, saying she would not call the mayor after the arrest of Julian Willis after he allegedly punched a pro-Trump protester, giving the protester a bloody nose.

"You can lecture me on professionalism. And see what happens," Porter wrote in the texts, despite famously wearing a Batgirl Halloween costume to the House of Representatives on the same day Democrats voted for a resolution on ground rules for the impeachment inquiry surrounding then-President Donald Trump. The National Republican Congressional Committee and other Republicans mocked the costume on Twitter.