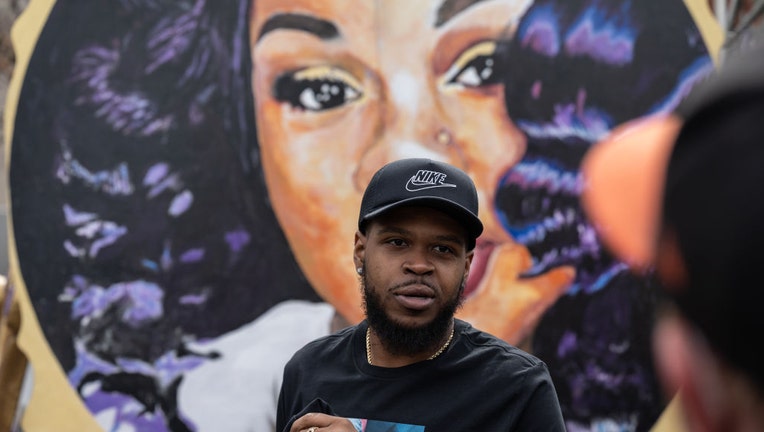 Kenneth Walker, boyfriend of Breonna Taylor, stands in front of a portrait of Taylor during a protest memorial for her in Jefferson Square Park on March 13, 2021 in Louisville, Kentucky. (Jon Cherry/Getty Images)

LOUISVILLE, Ky. - The boyfriend of Breonna Taylor who fired a shot at police as they burst through Taylor's door the night she was killed has settled two lawsuits against the city of Louisville, his attorneys said Monday.

The city agreed to pay $2 million to settle lawsuits filed by Kenneth Walker in federal and state court, one of his attorneys, Steve Romines, said in a statement. He added that Taylor's death "will haunt Kenny for the rest of his life."

"He will live with the effects of being put in harm’s way due to a falsified warrant, to being a victim of a hailstorm of gunfire and to suffering the unimaginable and horrific death of Breonna Taylor," Romines said.

Walker and Taylor were settled in bed for the night when they were roused by banging on her apartment door around midnight on March 13, 2020. Police were outside with a drug warrant, and they used a battering ram to knock down the door. Walker fired a single shot from a handgun, striking Sgt. John Mattingly in the leg. Mattingly and two other officers then opened fire, killing Taylor.

The case highlighted the issue of "no-knock" warrants — which allow law enforcement agents to enter a home without announcing their presence - and led to a reexamination of the practice.

Walker was initially charged with attempted murder of a police officer, but charges against him were eventually dropped as protests and news media attention on the Taylor case intensified in the spring of 2020.

Walker told investigators he didn't know police were at the door, and he thought an intruder was trying to break in.
Earlier this year, U.S. Justice Department prosecutors charged three Louisville officers with a conspiracy to falsify the Taylor warrant.

One of the now-former officers, Kelly Goodlett, has pleaded guilty and admitted to helping create a false link between Taylor and a wanted drug dealer.

Walker wrote in an opinion piece in the Washington Post in August that a police officer had "finally taken some responsibility for the death of my girlfriend."

"Knowing all the problems that this failed raid would create, the Louisville police tried to use me as a scapegoat to deflect blame," he wrote. "It almost worked."

Two other former officers involved in the warrant, Joshua Jaynes and Kyle Meany, are scheduled to go on trial in federal court next year.

The city of Louisville paid a $12 million settlement to Taylor's mother, Tamika Palmer, in September 2020.

Walker's attorneys said Monday that part of the settlement he received would be used to set up a scholarship fund for law school students interested in practicing civil rights law. Another portion will be contributed to the Center for Innovations in Community Safety, a police and community reform Center at Georgetown Law School.