WASHINGTON - President Joe Biden will move his May 1 deadline for states to make all U.S. adults eligible for the COVID-19 vaccine up by about two weeks.

Biden on Tuesday announced that every American adult will be eligible by April 19 to get vaccinated.

"That’s the way to beat this," Biden added. "Get the vaccination when you can."

"I think if everyone continues down the road we’re on now, it will be behind us, but it’s not over yet," he explained.

The president visited a COVID-19 vaccination site in Virginia before making remarks at the White House updating the nation on the administration's progress against the coronavirus.

Biden also announced that 150 million doses have been put into people's arms since his inauguration on Jan. 20. The figure puts him well on track to meet his new goal of 200 million shots administered by April 30 — his 100th day in office. Biden's original goal had been 100 million shots in arms by the end of his first 100 days, which was met last month. 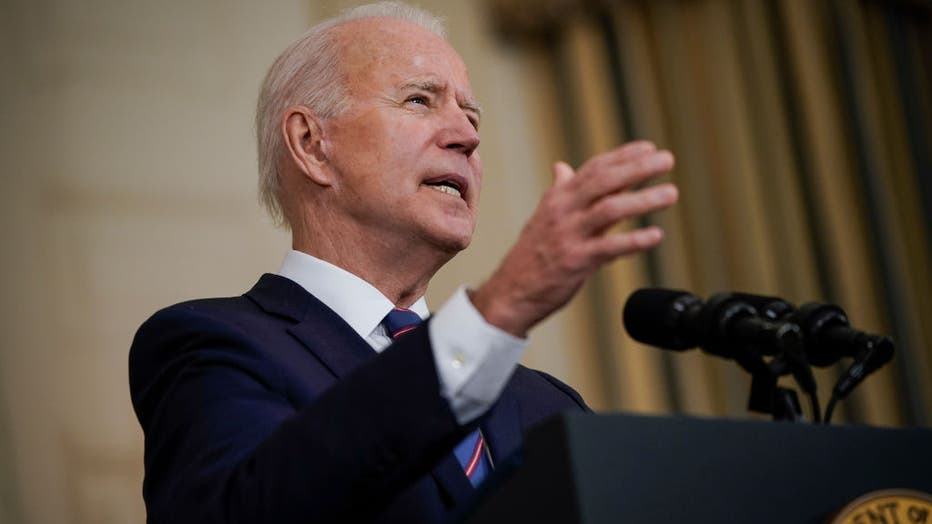 "At the time, some said 100 million shots were too ambitious and then they said it wasn’t ambitious enough," Biden continued. "Well, we got to keep moving. If I could raise it up higher, I’ll do that as well."

The announcement about vaccine eligibility comes as many states have already moved up their deadlines from the original May 1 goal. A flood of vaccine supply is also being sent to states this week.

At least a dozen states opened eligibility to anyone over the age of 16 on Monday alone, while New Jersey's governor announced Monday that people age 16 and older will become eligible on April 19. A handful of states, including Hawaii and Oregon, still have May 1 as the deadline.

The president had announced just last week that 90% of adults would be eligible for one of three approved COVID-19 vaccines by April 19, in addition to having a vaccination site within 5 miles of their home.

But officials have repeatedly noted that eligibility isn't the same as actually being vaccinated, as people still have to make their appointments to get inoculated.

The U.S. vaccination campaign is in a race against an uptick in virus cases and deaths, which have fueled fears of another nationwide surge. To date, more than 107 million Americans have received at least one dose — or 32.4% of the total population — while 62.3 million (18.8%) are fully vaccinated, data from the U.S. Centers for Disease Control and Prevention shows.

Last week, the administration also launched a "We Can Do This" campaign to encourage those who are hesitant to get the vaccine against the coronavirus, which has claimed more than 555,000 American lives.

RELATED: More than 100M US adults have received at least 1 dose of COVID-19 vaccine, CDC says

This story was reported from Cincinnati. The Associated Press and Chris Williams contributed.