WASHINGTON - An anguished and angry President Joe Biden called for new restrictions on firearms Tuesday night after a gunman massacred 18 children at a Texas elementary school. "We have to act," Biden told the nation, after years of failure to pass new laws.

"I'd hoped, when I became president, I would not have to do this. again," Biden began during a news conference on Tuesday. "Another massacre. Uvalde, Texas. An elementary school. Beautiful, innocent second, third, fourth-graders. And how many scores of little children who witnessed what happened, see their friends die as if they're in a battlefield for God's sake. They'll live with it for the rest of their lives."

"When in God’s name are we going to stand up to the gun lobby?" Biden said at the White House shortly after returning from a five-day trip to Asia that was bookended by tragedy. 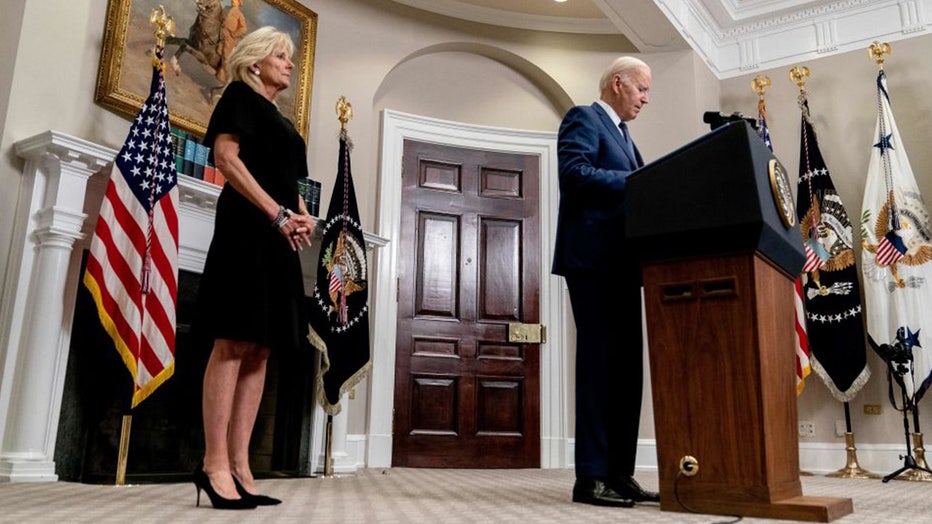 U.S. First Lady Jill Biden looks on as U.S. President Joe Biden delivers remarks in the Roosevelt Room of the White House in Washington, DC, on May 24, 2022, after a gunman shot dead 18 young children at an elementary school in Texas. (STEFANI REYNOLDS/AFP via Getty Images)

RELATED: Who is Salvador Romas? What we know about Texas elementary school shooting suspect

With first lady Jill Biden standing by his side in the Roosevelt Room, the president said, "It’s time we turned this pain into action."

At least 18 students were killed in Texas, according to a state senator who said he was briefed by law enforcement. One teacher was killed. So was the gunman.

"There's a lot we don't know yet, there's a lot we do know. The parents who will never see their child again, never have them jump in bed and cuddle with them, parents who will never be the same. To lose a child is like having a piece of your soul ripped away. There's a hollowness in your chest, you feel like you're being sucked into it and never going to be able to get out – suffocating. It's never quite the same," Biden added.

Just two days before Biden left on his trip, he met with victims' families after a hate-motivated shooter killed 10 Black people at a grocery store in Buffalo, New York.

The back-to-back tragedies served as sobering reminders of the frequency and brutality of an American epidemic of mass gun violence.

"These kinds of mass shootings rarely happen anywhere else in the world," Biden said. "Why?"

It's unclear if the latest tragedy will change the political dynamic around guns after so many others — including the 2012 shooting at Sandy Hook Elementary School in Connecticut that killed 26, including 20 children — failed to do so. 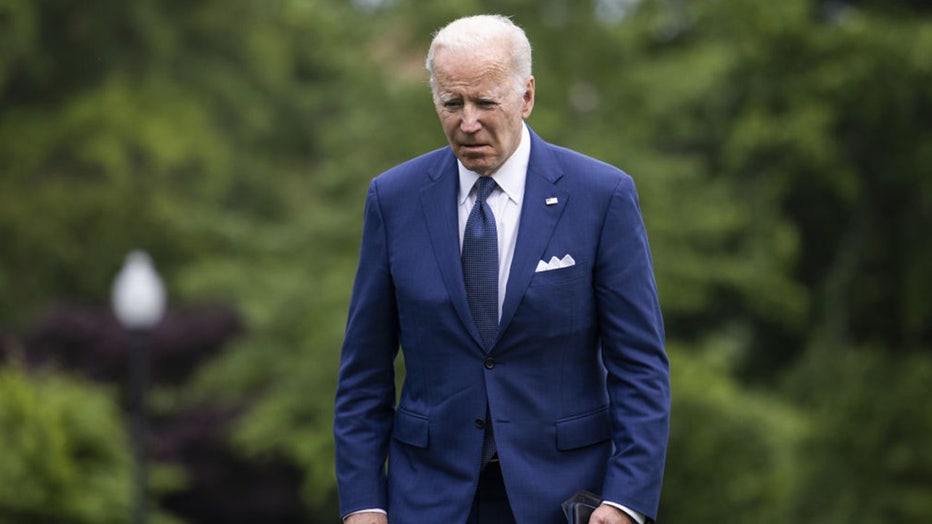 US President Joe Biden walks on the South Lawn of the White House after arriving on Marine One in Washington, D.C., US, on Tuesday, May 24, 2022.  (Jim Lo Scalzo/EPA/Bloomberg via Getty Images)

In a reminder of the issue's divisiveness, Biden's call for gun control on Tuesday was booed at a campaign event in Georgia hosted by Herschel Walker, a Republican running for U.S. Senate.

Vice President Kamala Harris said earlier that people normally declare in moments like this, "our hearts break — but our hearts keep getting broken ... and our broken hearts are nothing compared to the broken hearts of those families."

"We have to have the courage to take action ... to ensure something like this never happens again," she said.

Shortly before landing in Washington, he spoke with Texas Gov. Greg Abbott from the presidential plane "to offer any and all assistance he needs in the wake of the horrific shooting in Uvalde, TX," White House communications director Kate Bedingfield tweeted.

Biden directed that American flags be flown at half-staff through sunset Saturday in honor of the victims in Texas.

RELATED: List: The most deadly US mass school shootings

Catherine Stoddard with FOX TV Stations contributed to this report.