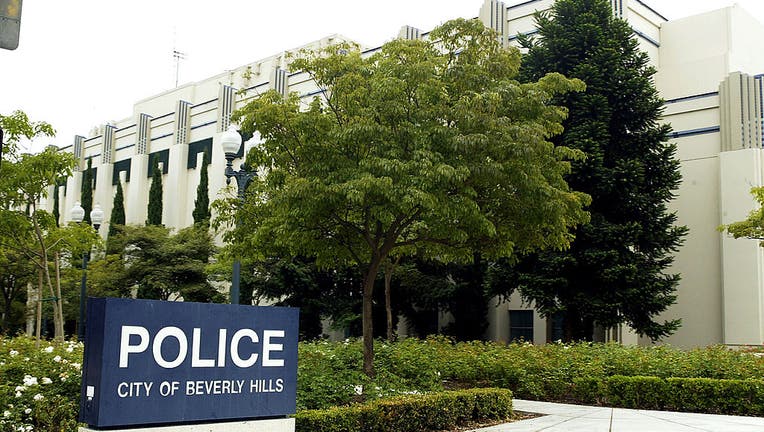 BEVERLY HILLS, Calif. - Beverly Hills police are coming under criticism for arresting and holding 28 protesters after officers declared an unlawful assembly under a recently passed city ordinance banning most nighttime gatherings of 10 or more people.

Protesters were still in custody late Saturday afternoon, prompting the National Lawyers Guild to call for their immediate release, according to the Los Angeles Times.

"It is outrageous that during a statewide health crisis -- and when, as we have been hearing from our local, state, and federal officials, the number of COVID-19 cases in California are continuing to rise -- that the Beverly Hills Police Department would hold these peaceful protesters in custody," the organization said in a statement reported by the Times.

"Keeping these men and women in custody will unnecessarily expose them to significant health risk and endanger their lives."

Protest organizer Austin Tharpe, 29, told the Times the arrests were "very retaliatory," and that demonstrators are usually detained, cited and released within a few hours.

The arrests, mostly for unlawful assembly, were made about 1 a.m. Saturday and included one suspect being arrested on suspicion of arson, Beverly Hills Police Sgt. Thomas West told City News Service.

"Apparently, the suspect was (attempting) to light a building or something on fire," West said. "They (the arrestees) are here at our station being processed. Once they are processed, they can be cited out. With 28 people, it's just taking awhile."

Demonstrations began at 7:30 p.m. Friday in the area of Santa Monica Boulevard, between North Alpine and North Rexford drives, according to the Beverly Hills Police Department.

About 100 protesters sat in the middle of Santa Monica Boulevard at Rexford Drive, just before 8 p.m., impacting traffic, police said.

The demonstration then moved northbound onto a residential portion of Rodeo Drive, north of Santa Monica Boulevard and stopped briefly at the Beverly Hills sign at Beverly Gardens Park, 9439 Santa Monica Blvd., the department said.

From the park, protesters marched along Santa Monica Boulevard to Rexford Drive, then north on Rexford Drive to Carmelita Avenue, where police declared an unlawful assembly at 11:40 p.m.

At 1:10 a.m., police announced protesters had left the city and the unlawful assembly was ended with an unknown number of arrests.

On June 13, Beverly Hills banned nighttime gatherings of at least 10 or more people on residential streets and other public places in residential areas in response to two protests that  "disrupted the tranquility" of a neighborhood.

The proclamation, issued by City Manager George Chavez in his role as director of emergency services, came in response to a second nighttime protest in a residential area conducted by the group Occupy Beverly Hills, which began at 10 p.m. on June 12 and continued until approximately 1 a.m., according to the proclamation.

The protest "included bullhorns and amplified music and disrupted the tranquility of the residential neighborhood during hours when many people would be ordinarily sleeping," the proclamation said.

The order is in effect from 9 p.m. to 8 a.m., and will remain in effect until further notice. Violating the order is punishable as a misdemeanor under the Beverly Hills Municipal Code, according to the proclamation.

Assemblies that are silent, such as candlelight vigils, and gatherings on private property, are exempt.

The order defines an assembly as "any gathering or group of 10 or more people'' on a public street, sidewalk, alley, park or other public place "if those 10 people have a common purpose or goal."