A shooting at a Beverly Hills restaurant marks the latest in a string of brazen robberies involving high-end jewelry.

BEVERLY HILLS, Calif. - Armed, private security guards will be deployed in Beverly Hills in response to a robbery and shooting at an upscale restaurant, Police Chief Dominick Rivetti said Saturday.

"First and foremost safety is our top priority in Beverly Hills and criminal activity of any kind will not be tolerated,'' Rivetti said in a statement. "I want the world to know that Beverly Hills is a safe community. We invest significantly in our police department to ensure our officers have every resource necessary to do their jobs effectively. We will be supplementing our personnel with armed, private security guards who will have a strong, visible presence in the city.''

Officers were called about 2:10 p.m. Thursday to Il Pastaio in the 400 block of North Canon Drive, near Santa Monica Boulevard, on a report of a robbery with gunfire, and arrived to find a woman who had been shot.

The victim was not the intended target, according to police.

"The female was at the location with two other people when three male  suspects demanded property from another patron,'' according to the Beverly Hills Police Department. "One of the suspects shot the female and the three suspects fled the location on foot.''

The suspects stole a $500,000 Richard Mille watch from a man at the restaurant. 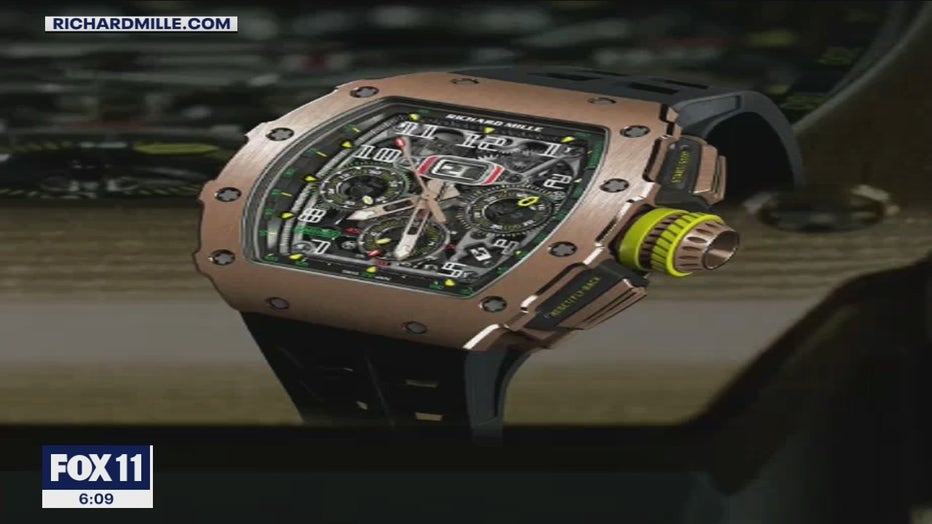 The watch belonged to jeweler Shay Belhassen, who is now offering two rewards: $50,000 for the return of the watch and another $50,000 to turn in the three suspects.

"These guys didn’t come to play. He had a bullet in the chamber," Belhassen told FOX 11's Phil Shuman.

"When the gun was pointed to my head I took a chance and grabbed the gun and tried to push it away from me and we got to a tussle on the ground, me and two other guys, trying to get the gun away from them and while his hand was still in the trigger a couple of shots got fired," he added.

This robbery is the latest in a series of crimes happening in the area where jewelry was the target. However, police do not believe the crimes are related.

Police are asking anyone with information related to the shooting to text TIP BEVHILLSPD, followed by the message, to 888777.

"We are actively looking for suspects in this case, in cooperation with our law enforcement partners,'' Rivetti said. "While similar crimes are also happening in other cities, our responsibility is to those who live in, work in and visit Beverly Hills."