Things got heated when gubernatorial candidate Beto O'Rourke interrupted a press conference by Gov. Greg Abbott, asking about gun control in the wake of the Uvalde school shooting.

"The time to stop the next shooting is right now, and you’re doing nothing," O’Rourke stood up shouting, moments after Abbott finished speaking. O’Rourke was quickly escorted out of the room.

O’Rourke, who is currently running for the governor of Texas, called the Republican’s response to the tragedy "predictable." O’Rourke was escorted out while members of the crowd yelled at him, with Uvalde Mayor Don McLaughlin calling him a "sick son of a b----."

Just moments prior to the confrontation, Abbott cited mental health challenges as "the problem" to Tuesday’s mass shooting, but did not bring up the issue of guns. 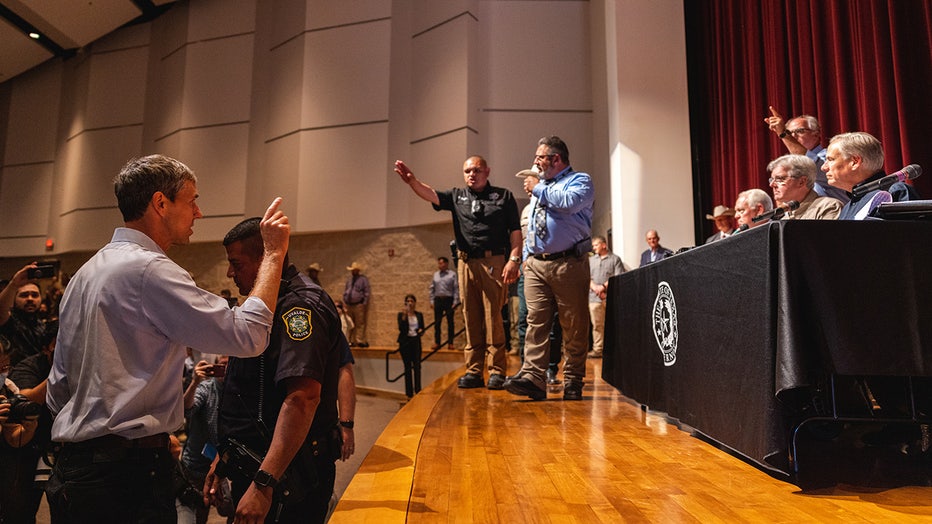 "Before coming out here, we had a long discussion with law enforcement at all levels ... and, I asked the sheriff and others an open-ended question and got the same answer from the sheriff as well as from the mayor of Uvalde. The question was, what is the problem here? And they were straightforward and emphatic. They said, 'We have a problem with mental health illness in this community,'" Abbott said.

Abbott elaborated on the magnitude of the mental health challenges the community is facing and the need for more mental health support in this region.

Moments after he was escorted out, O’Rourke’s website "Beto for Texas" temporarily went down, according to users on social media.

The Democratic candidate for Texas governor spoke with the media after interrupting Abbott. The two are running against each other in the November election.

"You tell me when the right time is to stand up and save kids in Texas," O’Rourke told reporters. "It’s right now. It’s every single day, and I’m going to do whatever I can, whatever it takes to prevent these kinds of massacres from continuing to happen."

He continued, "This is about change, and the only way we’re going to change is to stop this from continuing to happen."

Last night, O’Rourke wrote on Twitter, "Governor Abbott, if you have any decency, you will immediately withdraw from this weekend’s NRA convention and urge them to hold it anywhere but Texas."

This morning, O’Rourke also wrote on social media, "We have the power to change this and we will."

The gunman who massacred 19 children and two teachers at a Texas elementary school legally bought two AR-style rifles just days before the attack, soon after his 18th birthday, and seemed to hint online that something was about to happen.

Gov. Abbott said Wednesday the gunman had "no known mental health history," and a criminal history had not been identified either. He said there was "no meaningful forewarning of a crime," beyond posts on Facebook shortly before the attack on Tuesday at Robb Elementary School in the small town of Uvalde, population 16,000.

The gunman, identified as Salvador Ramos, shot and wounded his grandmother, then fled the scene, crashing his truck near the school and entering the building, authorities said. Lt. Christopher Olivarez of the Texas Department of Public Safety told CNN that all the victims of the attack were in the same fourth-grade classroom.

The killer "barricaded himself by locking the door and just started shooting children and teachers that were inside that classroom," Olivarez said. "It just shows you the complete evil of the shooter."

Law enforcement officers eventually broke into the classroom and killed the gunman. Police and others responding to the attack also went around breaking windows at the school to enable students and teachers to escape.

RELATED: 'What are we doing?': Sen. Chris Murphy begs for gun control after Texas shooting

This is a developing story. Refresh this page for updates.