BERLIN - A huge aquarium in Berlin burst, spilling debris, water and more than a thousand tropical fish out of the AquaDom tourist attraction in the heart of the German capital early Friday.

Police said parts of the building, which also contains a hotel, cafes and a chocolate store, were damaged as 1 million liters (264,000 gallons) of water poured from the aquarium shortly before 6 a.m. (0500 GMT). Berlin's fire service said two people were slightly injured.

The company that owns the AquaDom, Union Investment Real Estate, said in a statement Friday afternoon that the reasons for the incident were "still unclear."

Mayor Franziska Giffey said the incident had unleashed a "veritable tsunami" of water but the early morning timing had prevented far more injuries.

"Despite all the destruction, we were still very lucky," she said. "We would have had terrible human damage" had the aquarium burst even an hour later, once more people were awake and in the hotel and the surrounding area, she said. 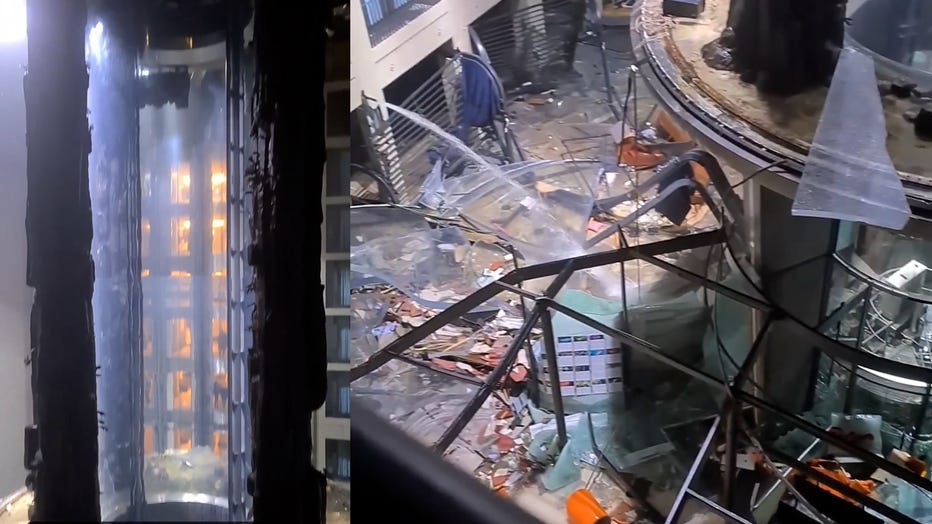 Damage is pictured in screengrabs from a video taken on Dec. 16, 2022, at the Radisson Blu hotel in Berlin, Germany. (Credit: Iva Yudinski via Storyful)

The 25 meter tall (82 foot tall) AquaDom was described as the biggest cylindrical tank in the world and held more than a thousand tropical fish before the incident. Among the 80 types of fish it housed were blue tang and clownfish, two colorful species known from the popular animated movie "Finding Nemo."

"Unfortunately, none of the 1,500 fish could be saved," Giffey said.

Efforts were underway Friday afternoon to save an additional 400 to 500 smaller fish housed in aquariums underneath the hotel lobby. Without electricity, their tanks were not receiving the necessary oxygen for them to survive, officials said. 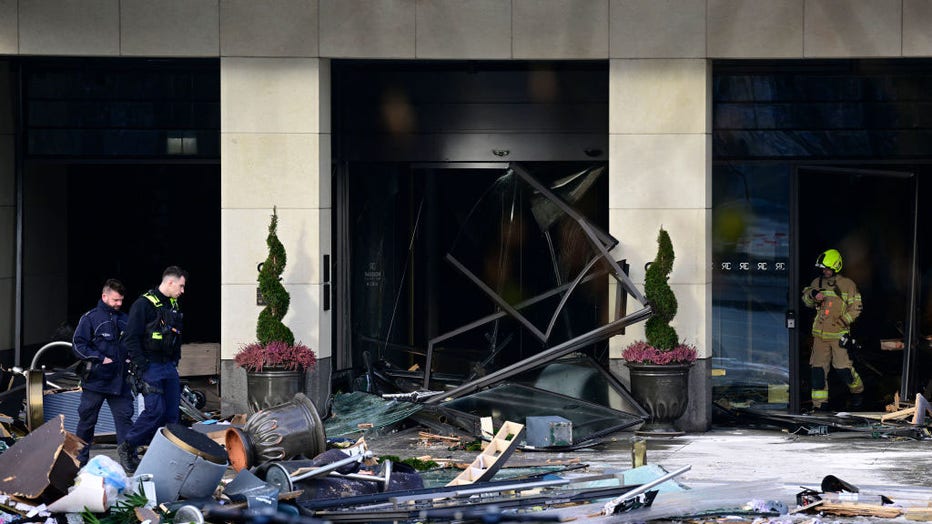 Policemen and firefighters walk past debris in front of the Radisson Blu hotel, where a huge aquarium located in the hotel's lobby burst on December 16, 2022, in Berlin. The 14-meter-high AquaDom aquarium has burst and the leaking water has forced th

Various organizations, including the Berlin Zoo, offered to take in the surviving fish.

Aquarium operator Sea Life said it was saddened by the incident and was trying to get more information about the incident from the owners of the AquaDom.

Sea Life's own aquarium is located in the same building and visitors can tour it and the AquaDom on a single ticket.

There was speculation freezing temperatures that got down to minus 10 degrees Celsius (14 degrees Fahrenheit) overnight caused a crack in the acrylic glass tank, which then exploded under the weight of the water. Police said there was no evidence the incident resulted from a malicious act.

About 300 guests and employees had to be evacuated from the hotel surrounding the aquarium, police said.

Sandra Weeser, a German lawmaker who was staying in the hotel, said she was awoken up by a large bang and thought there might have been an earthquake.

"There are shards (of glass) everywhere. The furniture, everything has been flooded with water," she said. "It looks a bit like a war zone."

Police said a Lindt chocolate store and several restaurants in the same building complex, as well as an underground parking garage next to the hotel, sustained damage. A fire service spokesman said building safety experts were assessing the extent to which the hotel had sustained structural damage.

Hours after the incident, trucks began clearing away the debris that had spilled out onto the street in front of the hotel. Brightly colored Lindt chocolate wrappers were scattered in front of the building where the chocolate shop had been damaged. A small crowd of tourists and onlookers snapped photos from behind the police line across the street.

The aquarium, which was last modernized in 2020, is a major tourist magnet in Berlin. The 10-minute elevator ride through the tropical tank was one of the highlights of the attraction.

Animal rights group PETA tweeted Thursday that the aquarium became a "death trap" for the fish housed in it. "This man-made tragedy shows that aquariums are not a safe place for fish and other marine life," they wrote.

Iva Yudinski, a tourist from Israel who had been staying at the hotel, said she was shocked by the incident

"Just yesterday we watched it and we were so amazed (by) its beauty," she said. "Suddenly it’s all gone. Everything is a mess, a total mess."