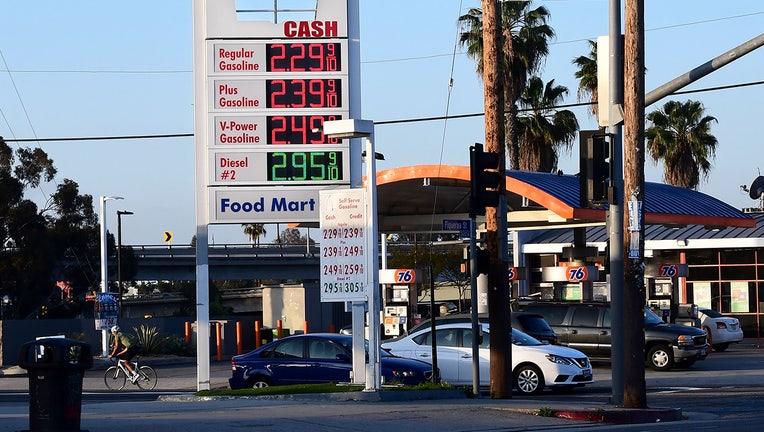 Motorists make their way past some of the lowest priced petrol available from a gas station in Los Angeles, California on April 21, 2020, a day after oil prices dropped to below zero as the oil industry suffers steep falls in benchmark crudes due to (FREDERIC J. BROWN/AFP via Getty Images)

LOS ANGELES - The average price of a gallon of self-serve regular gasoline in Los Angeles County dropped on Tuesday to its lowest amount since Feb. 2, 2017, decreasing eight-tenths of a cent to $2.881.

The average price has dropped 51 consecutive days, decreasing 67.6 cents, including three-tenths of a cent on both Sunday and Monday, according to figures from the AAA and Oil Price Information Service. The streak is the longest since a 53-day run from Nov. 6-Dec. 28, 2019.

The Orange County average price dropped to its lowest amount since Feb. 1, 2017, decreasing eight-tenths of a cent to $2.852. It has dropped 55 of the past 56 days, decreasing 66.7 cents. It dropped for 53 consecutive days, rose one-tenth of a cent on Sunday, then resumed dropping on Monday.

The Orange County average price is 5.7 cents less than one week ago, 39.5 cents lower than one month ago and $1.197 below what it was one year ago. It has dropped 69.3 cents since the start of the year.

The dropping prices are the result of a continuing decrease in demand as people have reduced driving because of stay-at-home orders and higher unemployment, which has caused gasoline inventories to increase, according to Jeffrey Spring, the Automobile Club of Southern California's corporate communications manager.

Supply and demand is the second most important factor in the gas price behind the crude oil price, which has dropped sharply since the outbreak of the coronavirus pandemic.