LOS ANGELES - The origins of a "suspicious" fire that broke out on the seventh floor of a 25-story apartment building in West Los Angeles, injured 11 people, including one in grave condition, and prompted at least two residents to contemplate leaping from balconies, remained under Los Angeles Fire Department investigation Thursday.

The flames were reported in the Barrington Plaza Apartments at 11740 Wilshire Blvd., near Barrington Avenue, at 8:37 a.m. Wednesday and were extinguished at 9:56 a.m., the LAFD reported.

LAFD Chief Ralph Terrazas did not discuss a possible cause of the fire, but called it "suspicious."

"We have some information I can't share with you right now, but it is suspicious right now," he said shortly after the fire was knocked down.

The fire began on the building's seventh floor, which is the sixth "residential" floor above the building's lobby, said LAFD spokesman Brian Humphrey. The flames also affected the sixth, eighth and ninth floors of the building.

Two 30-year-old men in the apartment where the fire started were injured and both were hospitalized, one in grave condition and the other in critical condition, according to LAFD Capt. Erik Scott.

The man in critical condition was rescued by firefighters using a ladder while clinging to the outside of the building. The apartment the men were in sustained "significant" damage, Scott said.

Scott said a 3-month-old child suffered injuries described only as non- critical. Of the 11 people injured, seven were taken to hospitals.

Authorities said most were suffering from smoke inhalation.

The fire erupted about two hours after a blaze broke out in a commercial building roughly three blocks away, but investigators have determined the two fires were not connected.

LAFD Deputy Chief Armando Hogan said firefighters who were mopping up the earlier fire when they spotted the flames in the nearby Barrington Plaza building. Flames and heavy smoke could be seen pouring out of the building, and there were early reports of people jumping from balconies in an attempt to escape the blaze. Hogan said nobody actually jumped, but arriving fire crews found two people who were contemplating a leap -- including the man clinging to the outside the building.

Fire crews used a ladder to rescue the man, and an air mattress was deployed at the base of the building as a precaution.

At the height of the fire, LAFD helicopter crews were hoisting people from the roof of the burning building, something Terrazas called a seldom-used option.

A total of 15 people were hoisted from the roof, LAFD officials said.

A Los Angeles County Sheriff's Department helicopter crew also assisted in the operation, according to the sheriff's department. 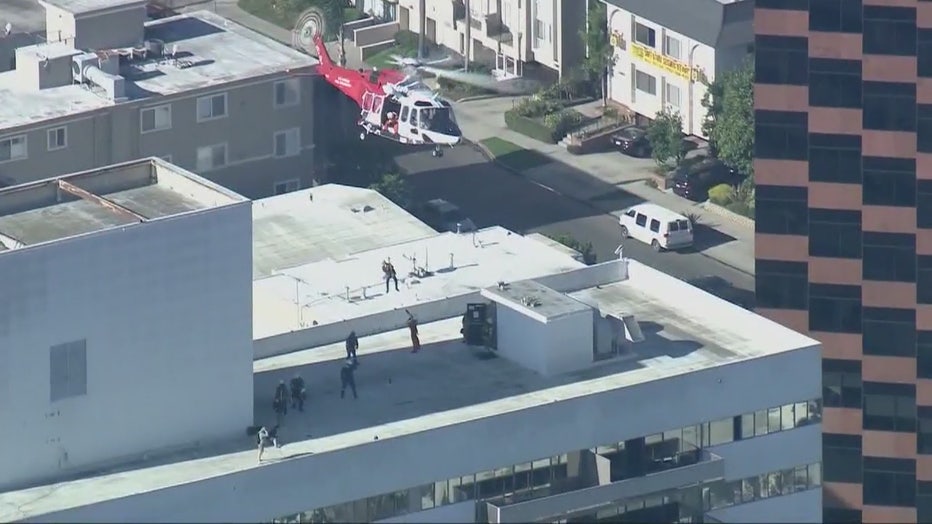 At one point, firefighters who scrambled up the stairs of the burning building crawled on their hands and knees through smoke-filled corridors and apartments, while crews outside the building set up hose lines to being dousing the fire from the exterior. Terrazas said he was "extremely pleased" with the success of the "unconventional tactics" used to battle the fire.

Police urged residents with videos related to either fire to provide them to investigators.

Barrington Plaza residents who need to retrieve medications from their unit in the fire-damaged building can go to the lobby of Barrington Plaza, Tower A, with their keys, authorities said today. Building personnel and security will coordinate with the Los Angeles Fire Department to help residents retrieve their medicines.

The Barrington Plaza building is no stranger to fire. On Oct. 18, 2013, a fire in the building heavily damaged an 11th-story apartment and left nearly a dozen people injured, including three firefighters and a critically injured 2-year-old girl who was found in a smoke-filled stairwell on the 23rd floor.