EDINBURGH, Scotland - A woman believed to have been the oldest living female World War II veteran has died at 108 in Scotland.

Anne Robson, who served in the women’s branch of the British Army during the war, recently passed away, according to the Women's Royal Army Corps Association, a U.K. nonprofit that supports more than 3,000 female army veterans. 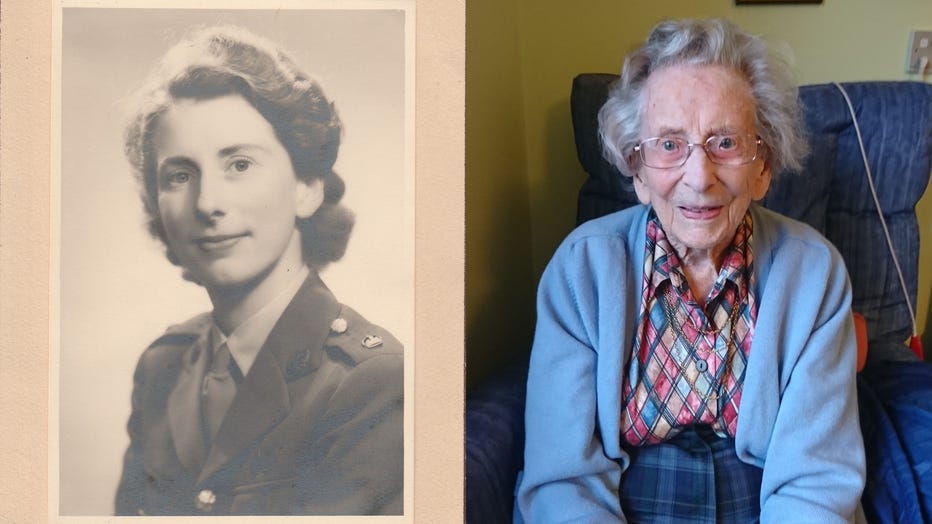 Anne Robson is pictured during her Army career, alongside an image of her from recent years. (Photo credit: Provided / Women's Royal Army Corps Association)

Robson training as a physiotherapist in 1933 before becoming a teacher later that year, according to the WRAC Association.

“It was while she was teaching that WWII broke out. After hearing that a women’s section of the army was being formed, she decided that there was no better way to get involved,” the association said.

Robson joined the Auxiliary Territorial Service in 1942, first serving as a physical training instructor and later completing her service in the rank of Senior Commander as Assistant Inspector ATS Physical Training. Robson stayed in the British army until the end of the war, according to the WRAC Association.

She is said to have remembered Victory in Europe Day, generally known as VE Day, very fondly and “had a naughty twinkle in her eye” when recalling the celebrations, according to the association.

Robson remained in the service for another two years after the war ended, and then became a senior lecturer at the Avery Hill College of Education in London. She married primary school headmaster, Jack Robson, in 1953, and the couple moved to Newcastle.

After her husband passed away in 1972, she returned to her native Scotland and lived in St. Andrews for several years.

Later in life, Robson moved into residential care in Edinburgh. As the oldest resident of her care home, Anne used to take to the stage at Christmas and give a speech over dinner, according to the Edinburgh Evening News.

Robson was described as reserved and a very “gentle woman,” yet also “fiercely independent” with a “naughty sense of humor,” according to the WRAC Association.

In 2016, Alyce Dixon passed away at age 108 in Washington D.C. — who at the time had been believed to be the oldest living female veteran. Dixon was one of the first African-American women in the U.S. Army, joining the Women's Army Corps in 1943.