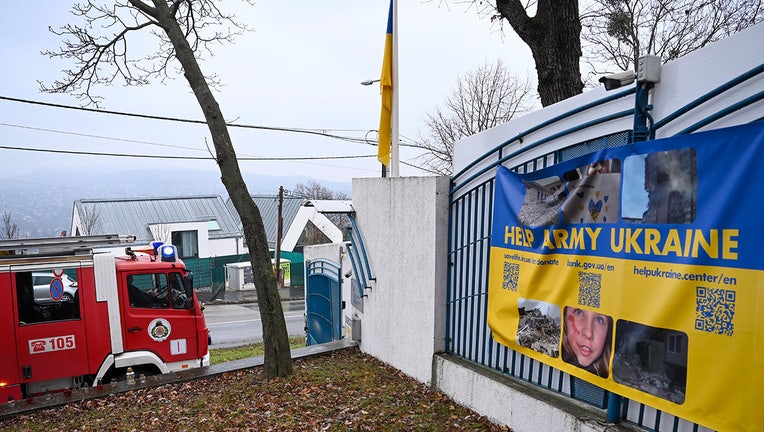 A local fire engine is seen in front of Ukraine's embassy in Budapest on December 2, 2022, after a bloody package containing animal eyes was received. (Photo by ATTILA KISBENEDEK/AFP via Getty Images)

Foreign Ministry spokesman Oleh Nikolenko wrote on Facebook that the "bloody parcels" were received by the Ukrainian embassies in Hungary, the Netherlands, Poland, Croatia and Italy, as well as by consulates in Naples, Italy; Krakow, Poland and the Czech city of Brno. He said that "we are studying the meaning of this message."

Nikolenko said the parcels arrived after a package containing an explosive device sent to the Ukrainian Embassy in Madrid ignited upon opening on Wednesday and injured an employee. That was one of multiple explosive parcels found in Spain this week.

Spain´s Interior Ministry said police evacuated the Madrid embassy on Friday after another suspect package was detected. The ministry said the parcel was posted from outside Spain and might be part of the chain of mail sent to other embassies in Europe. Police were investigating the contents and did not find any explosives, the ministry said.

Elsewhere, the entrance to the residence of the Ukrainian ambassador to the Vatican was vandalized and the Ukrainian Embassy in Kazakhstan was warned of an attack with explosives, though that wasn't confirmed, Nikolenko said.

In Poland, a spokesman for the police in Warsaw confirmed by email that a package arrived at the Ukrainian Consulate in the Polish capital on Thursday that "raised concern" from one of the employees. The police department for protecting diplomatic missions was notified and "we quickly eliminated the danger" spokesman Sylwester Marczak said. He provided no further details. Marczak said he was not aware of any such parcel arriving at the Ukrainian Embassy in Warsaw.

Police in Krakow, in southern Poland, did not confirm an incident at the consulate there but said a suspicious package was identified at a post office Thursday. Police said the contents were being examined but would not say to whom the package was addressed. 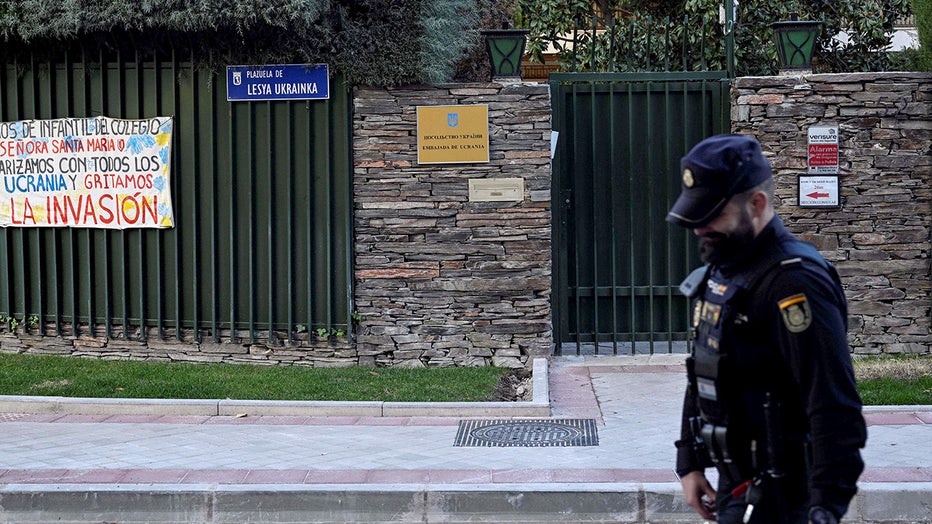 A Spanish policeman stands guard next to Ukraine's embassy in Madrid on December 2, 2022. (Photo by OSCAR DEL POZO/AFP via Getty Images)

In the Czech Republic, police said an X-ray scan found no explosives in a checked package, but they added later that animal tissue was found inside that has been submitted to laboratory tests.

Ukraine’s ambassador to the Vatican, Andrii Yurash, said the entrance to his Rome residence was vandalized Thursday afternoon with what he believed to be animal feces. The door to the apartment and the stairs and walls in the entryway were "smeared with a dirty substance with an unpleasant smell," he told The Associated Press. He said his wife and son were not home at the time, and police were called.

"And also the diplomatic mission in Italy received some letters also with some very unpleasant stuff inside, I mean some animal eyes. I don’t know exactly but it looks like eyes from fish or some other animals," Yurash said. "So it is hard to explain completely why, and what is the reason of this terrible message, but it is no doubt a systematic trend, a systematic attack on Ukrainian missions around Europe."

In Croatia, police said the Ukrainian Embassy in Zagreb called to report that a suspicious package meant for the embassy arrived at the post office, but diplomatic personnel didn’t collect it following the warning from the Foreign Ministry.

Croatian police took custody of the package and are investigating where it was sent from and what it contained. No other details were revealed.