LONG BEACH, Calif. - A man accused of driving drunk and killing a Long Beach couple and their 3-year-old son on Halloween night is back in custody
in connection with an earlier unrelated crime.

Carlo Navarro, 20, of Long Beach, had been released on $100,000 bail on Friday following his arrest at the scene of the collision the previous night that took the lives of Joseph Awaida, 30, Raihan Dakhil, 32, and their son, Omar.

The collision occurred at 9:55 p.m. Thursday in the area of Country Club Drive and Los Cerritos Park Place, where responding officers found the family lying on the ground. 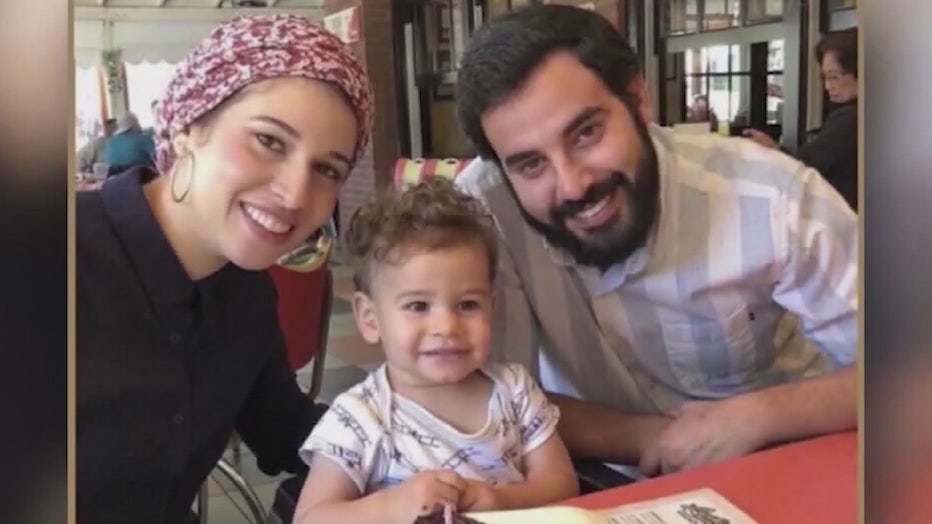 Long Beach police determined that Navarro was driving a 2002 Toyota Sequoia southbound on Country Club Drive and failed to make a turn. Instead, he drove onto the sidewalk and hit the family as they walked from Los Cerritos Park Place, according to investigators.

On Tuesday, Navarro was re-arrested by Long Beach police in connection with an earlier crime, and was being held on $500,000 bail, according to the sheriff's department and the Long Beach Post.

Related: Long Beach family dies after being struck by suspected DUI driver on Halloween while trick-or-treating

Long Beach City Prosecutor Doug Haubert told the Post that authorities re-arrested Navarro in connection with a June 30 break-in at a Bixby Knolls business, and he had been charged with burglary, vandalism and possession of burglary tools.

Police had already arrested Navarro on suspicion of that crime in June, but he had been free on $20,000 bail.

In light of the new accusations that Navarro is responsible for killing three people, Haubert's office sought an arrest warrant for Navarro and asked a judge to set his bail to $500,000 in their misdemeanor case, Haubert said. After a judge approved that bail amount Tuesday, officers re-arrested Navarro.

Since the deadly crash on Halloween and Navarro's release on bail shortly thereafter, anger had poured out online about how he could be free after such a tragedy, the Post reported.

His $100,000 bail, set by a uniform schedule, was a typical amount for an arrest on suspicion of manslaughter. Because Navarro hadn't yet been formally charged with a crime in the crash, authorities didn't have a chance to ask a judge to increase that bail before he posted bond.

Friends of the Long Beach family are collecting money to help cover funeral and medical costs. More than $224,000 from about 4,000 donors had been collected as of this morning, according to a GoFundMe page that was set up with a stated goal of $250,000.

A public candlelight vigil will be held at 6 p.m. Thursday at Los Cerritos Park, 3750 Del Mar Ave. in Long Beach.