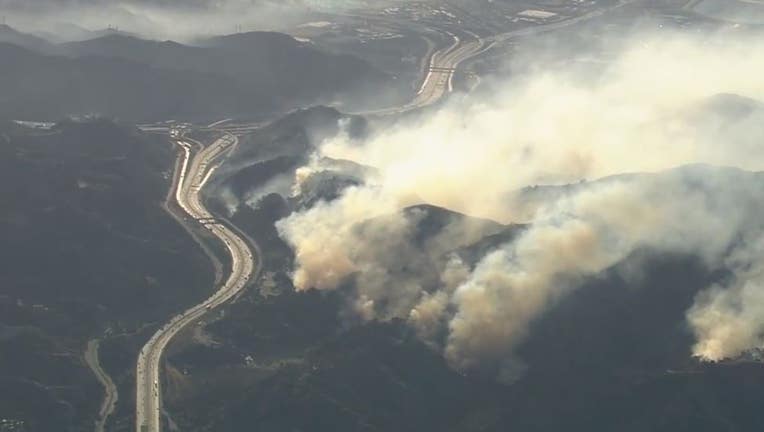 LOS ANGELES - The Los Angeles Fire Department lifted all evacuation orders for the Saddleridge Fire on Saturday and residents were allowed back into their homes. All evacuation centers have been closed. Law enforcement officers stayed in the fire areas for security and to offer up any questions residents or business owners may have, officials said.

To see which areas have been lifted, check the LAFD's interactive map here.

The brush fire destroyed 19 structures and forced nearly 100,000 people from their homes in parts of the San Fernando Valley.

One fatality was confirmed Friday morning related to this fire that has torn a path of destruction across the northern San Fernando Valley.

Also, the annual Oktoberfest celebration at Mission College has, however, been rescheduled for Saturday from 4 p.m. - 8 p.m. Tickets purchased for the Oct. 12 date will be honored.

At 5 p.m. Friday, residents who are under mandatory evacuation and whose homes are north of the 118 Freeway will be allowed to be escorted to their homes by LAPD personnel for five minutes to get important documents, medication, small pets, and other valuables, the Los Angeles Police Department said. Residents must have proof of residence. The two locations where residents can go to obtain escorts are:

• Classes were canceled at dozens of area schools on Friday due to the raging inferno. Click here for a complete list.

For the latest on road closures, click here for additional information.

View a collection of valuable maps related to this fire in our Map Room.

The wildfire broke out on Thursday night in the Sylmar area near the 210 Freeway at Yarnel Street.

The fire is being called the "Saddleridge" fire and was driven by high 50 mph winds in the area.

An adult male died after going into cardiac arrest on Thursday night, fire officials said. A firefighter was also injured and was transported to a hospital for a minor eye injury.

More than 23,000 homes were under mandatory evacuations. By Friday afternoon, at least one commercial structure and 31 homes were destroyed and several other structures are threatened.

“We need people to leave now while they can,” fire officials warned during a press conference Friday morning. "If you stay in [mandatory evacution] areas we cannot guarantee that we will save you.”

The Saddleridge fire caused damage to two LADWP circuits. Additionally, at least 16 power poles were damaged by the flames and will need to be replaced, according to LADWP. At least 870 customers were reportedly without power.

Fire erupts in Sylmar impacting 210 Freeway as evacuations are underway

The Saddleridge Fire driven by high winds has burned 15-20 acres of brush off the westbound Foothill (210) Freeway in Sylmar. An unknown number of homes are potentially threatened, according to Margaret Stewart of the Los Angeles Fire Department.

Shortly before 11:30 p.m. Thursday, fire officials said a 30-acre spot fire jumped the 5 Freeway -- to the area West of the 5 Freeway and west of Balboa.

SkyFOX aerial footage showed several semitrailers being consumed by the flames as the winds drove embers across the freeway that looked like waves in an ocean. 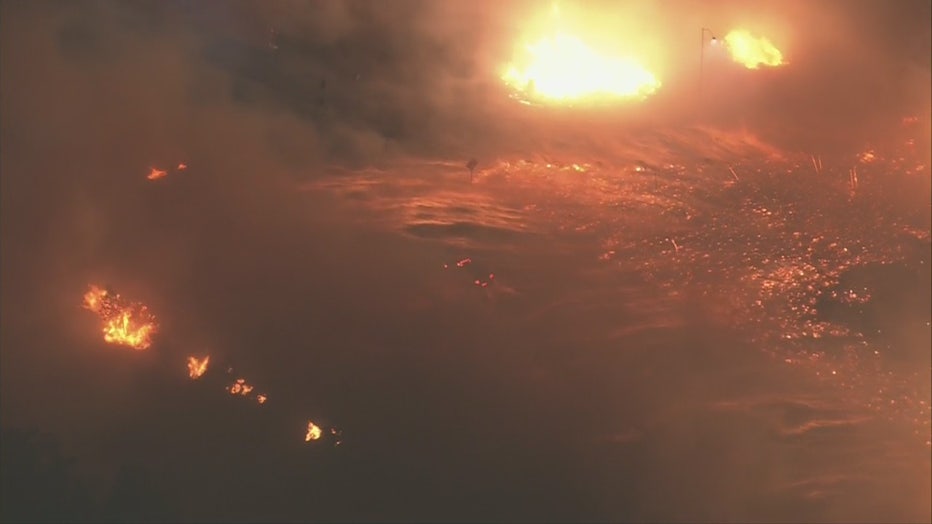 An unknown number of homes are potentially threatened, according to Margaret Stewart of the Los Angeles Fire Department. Several homes have already been destroyed.

"If you live in that area, please just pack up and leave now," Stewart said.

"Fire is uncontrolled. If told to evacuate, leave while you can," LAPD Chief Michael Moore said. "Otherwise you’re jeopardizing your life and firefighters’ lives." 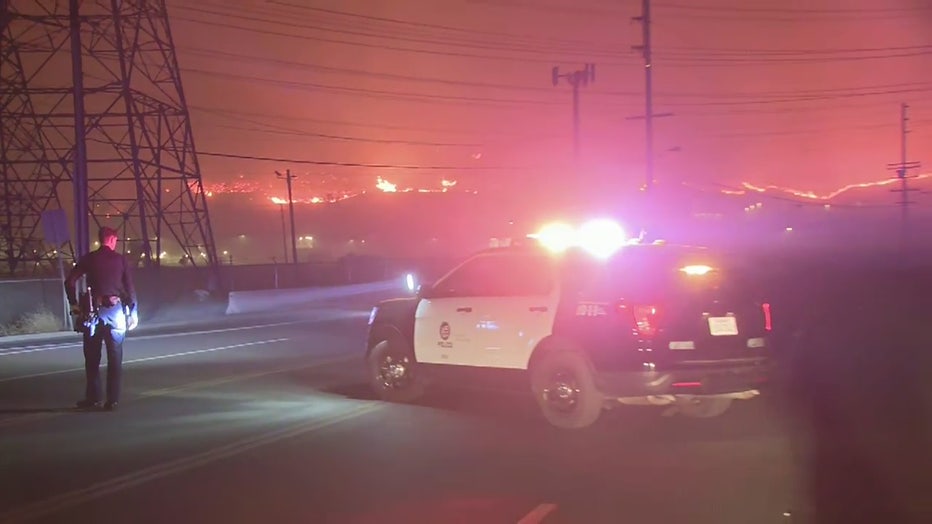 The nearby Aliso Canyon So Cal Gas facility, that was the site of the worst natural gas leak in U.S. history, was being threatened by flames.

Olive View Medical Center in Sylmar was in the process of being evacuated at 6:45 a.m. Friday.

Metrolink train and bus service was suspended through the Newhall Pass. AV Line 200 to Los Angeles was canceled at Santa Clarita on Friday due to the fire. Metrolink was offering train 200 passengers at Sylmar, Sun Valley and Burbank Airport North Station an alternative transit voucher for up to $50.

The Los Angeles Police Department is on a citywide tactical alert in response to the Saddleridge fire and were working with LAFD to carry out any necessary evacuations.

More than 1,300 firefighters were battling the Saddleridge fire, including at least 63 fire companies, and eight helicopters. Hundreds of police officers were also assisting.

California Gov. Gavin Newsom issued an emergency declaration for Los Angeles and Riverside counties on Friday to allocate further resources to assist with the fires affecting both regions.

Regarding potential looters during this disaster, LAPD Chief Michel Moore said, "If they choose to go in those areas, let me be clear, there will be no tolerance for any type of individual trying to make an opportunity to go there and seize the moment. We'll be aggressive in arresting and prosecuting these individuals." 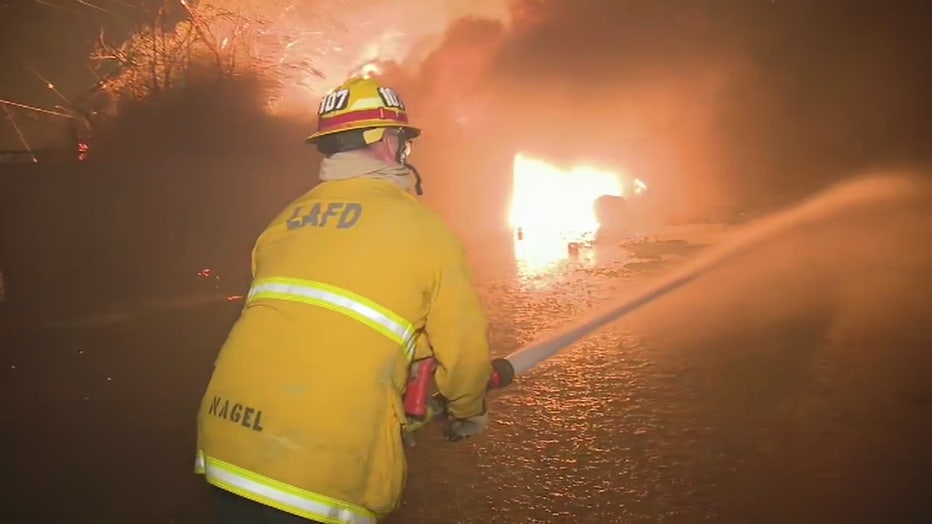