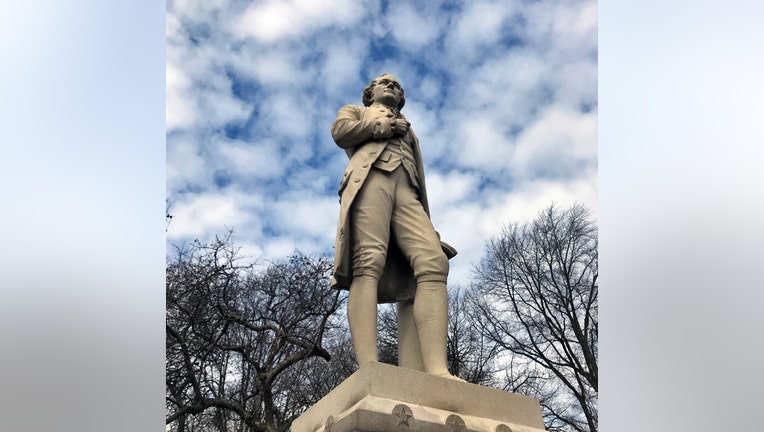 ALBANY, N.Y. (AP) - A new research paper takes a swipe at the popular image of Alexander Hamilton as the abolitionist founding father, citing evidence he was a slave trader and owner himself.

"Not only did Alexander Hamilton enslave people, but his involvement in the institution of slavery was essential to his identity, both personally and professionally," Jessie Serfilippi, an interpreter at a New York state historic site, wrote in a paper published last month.

But after poring over ledgers and correspondence of Hamilton and his wife, Eliza Schuyler Hamilton, Serfilippi, who works at the Schuyler Mansion State Historic Site in Albany, concluded that image falls short.

"It is vital that the myth of Hamilton as 'the Abolitionist Founding Father' end," Serfilippi writes in the paper, entitled, "'As Odious and Immoral a Thing': Alexander Hamilton's Hidden History as an Enslaver."  Her research was published on the New York state park system website.

The paper adds to a concern voiced by many academics that the fictitious Hamilton of the musical, who attacks slavery in a rap battle with Thomas Jefferson, is just that: fictitious.

"Fascinating article," tweeted Harvard Law professor and historian Annette Gordon-Reed, who has criticized the Broadway show in the past. "Reminds of the ubiquitous nature of slavery in the colonial period and the early American republic. Alexander Hamilton as an enslaver broadens the discussion."

Chernow called the paper a "terrific research job that broadens our sense of Hamilton's involvement in slavery in a number of ways." But he questioned her claim that slavery was "essential to his identity," and said Serfilippi omitted information that would contradict her conclusions.

For example, Chernow noted Hamilton's work with the Manumission Society to abolish slavery in New York and defend free Blacks when slave masters from out of state tried to snatch them off New York streets.

"Had she tried to reconcile these important new findings with a full and fair statement of Hamilton's anti-slavery activities, we would have gotten a large and complex view of the man and her paper would have been far more persuasive," Chernow said via email.

Miranda declined to comment through his publicist. In past interviews, he's said he welcomes discussion of both Hamilton's role in slavery and criticism of his show's handling of that part of his life.

When Hamilton married into the powerful Schuyler family in 1780, slavery was common among New York state's elite. More than 40 people were enslaved at the Schuyler family's Albany mansion and another estate over the years. The historic site has done extensive research into the family's so-called servants and incorporates it into its tours.

Albany Mayor Kathy Sheehan ordered the removal of the Maj. Gen. Philip Schuyler statue earlier this year in part because he was "reportedly the largest owner of enslaved people in Albany during his time," according to the mayor's office.

Serfilippi challenges the often-repeated claim that Hamilton's exposure to the brutalities of slavery during his childhood on St. Croix instilled a hatred of slavery. She said "no primary sources have been found to corroborate" that.

Biographers have noted that Hamilton helped legal clients and family members buy and sell slaves, but they've been less clear on whether he enslaved people himself. Serfilippi said notations in his cash books and in family letters clearly show he did.

For example, Hamilton's cash books record a payment of $250 to Philip Schuyler in 1796 for "2 Negro servants purchased by him for me." Another entry records receiving $100 for lending a "Negro boy" to another person. And Serfilippi notes an inventory made of Hamilton's property to settle his affairs after his death in the duel with Aaron Burr in 1804 includes "servants" valued at 400 pounds.

Joanne Freeman, Yale history professor and editor of the Library of America edition of Hamilton's writings, said via email that, "It's fitting that we are reckoning with Hamilton's status as an enslaver at a time that is driving home how vital it is for white Americans to reckon — seriously reckon — with the structural legacies of slavery in America."