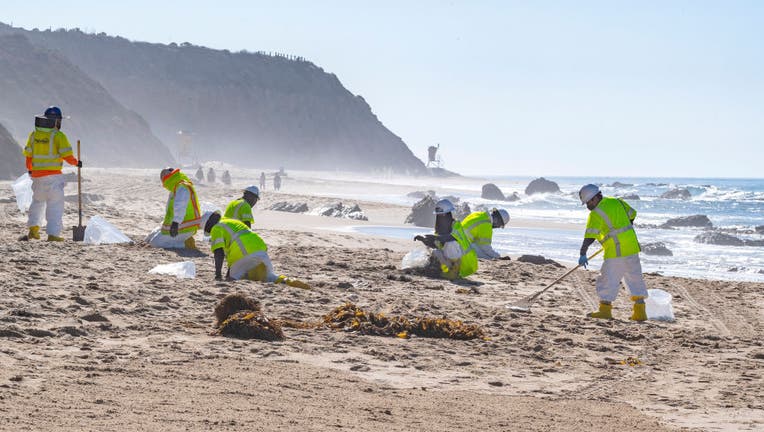 LAGUNA BEACH, CA - OCTOBER 14: Shoreline cleanup crews search for tar balls that have washed ashore along the beach at Crystal Cove State Park in Laguna Beach on Thursday, October 14, 2021. The tar on the sand, rocks and vegetation are remnants of th

LOS ANGELES (AP) - Hoping to recover a lost anchor chain, a work boat dragged a grappling hook along the seabed near an oil platform off the Southern California coast. But it hooked something else -- a pipeline carrying crude oil from the towering rig to shore.

Once snagged, the 197-foot (60-meter) boat dragged the pipeline until it snapped on one of the drilling platform’s legs. The gushing oil created a slick that ran for miles along the Ventura County coast northwest of Los Angeles.

The May 1991 accident provides a snapshot of the environmental dangers and trade-offs that come with the network of oil platforms and pipelines off Southern California’s world-famous coastline. The uneasy relationship is being tested again after a leaking undersea pipeline off Huntington Beach fouled beaches and killed seabirds and fish this month.

In the latest case, investigators believe it’s likely a cargo ship’s massive anchor struck and dragged the 16-inch (41- centimeter) pipeline up to a year ago. It’s suspected the damage led to the pipeline cracking and spilling about 25,000 gallons (94,635 liters) of crude.

The incident has renewed calls to end drilling in coastal waters and comes amid a societal reckoning over climate change and continued reliance on fossil fuels. It’s also raising questions about the soundness of old equipment, limits on government safety oversight, how willing companies are to make needed investments in repairs and whether it makes sense to have drilling rigs and pipelines near one of the world’s busiest port complexes.

The latest spill involved a pipeline that serves a cluster of three oil platforms several miles off the coast, south of Los Angeles. Original owner Shell Oil began operating the "Beta Unit" in 1980 and anticipated the operation would last about 35 years, "at which time the platform and other offshore facilities will be removed and the wells sealed."

They are now operating into a fourth decade.

The platforms and pipeline are owned by Houston-based Amplify Energy Corp., which emerged after prior owner Memorial Production Partners went bankrupt in 2017. Subsidiary Beta Offshore operates the platforms and the pipeline.

In 2011, Beta sought and received approval to replace two pipelines running between its platforms -- one for oil that previously was taken out of service because of corrosion damage, and one for water deemed "at the end of its usable life" in documents submitted to federal regulators.

Miyoko Sakashita of the Center for Biological Diversity, which opposes offshore drilling, said the removal of the old pipelines should have been a signal that the one that failed also was at risk.

"I’m very concerned that they recognized the corrosion and age of the pipes between the platform, yet this one went ignored," she said. "California’s offshore oil infrastructure is old and decrepit and needs to be decommissioned instantly."

There are 27 oil and gas platforms off the California coast. Federal officials have jurisdiction over 23, which range from almost 30 years old to more than 50 and are in water depths from 95 feet (29 meters) to almost 1,200 feet (366 meters) according to a report released last year by the Aquarium of the Pacific co-sponsored by the California State Lands Commission, which oversees pipelines in state waters.

About half the platforms are still producing oil, which goes from wells to the platforms to refineries via a network of pipes like the one in the recent spill.

Environmentalists have long complained about poor federal oversight of pipeline companies. In April, a scathing report from the congressional watchdog Government Accountability Office found fundamental problems with how officials monitor those lines -- an issue first recognized in 2007.

The report focused on about 8,600 miles (13,840 kilometers) of lines in the Gulf of Mexico. It said the Interior Department’s Bureau of Safety and Environmental Enforcement allows companies to use unreliable methods to detect leaks and has not systematically tracked whether pipelines move or become exposed because of strong currents or changes on the seafloor.

A top aide to Interior Secretary Deb Haaland acknowledged the problems, and officials said new rules could be finalized next year. Those will include significant changes to requirements for detecting leaks, inspections, repairs to pipelines and other areas, Laura Daniel-Davis, the agency’s principal deputy assistant secretary for land and mineral management, said in a letter to the GAO released last month.

The fewer pipelines present in the Pacific versus the Gulf means federal regulators can keep closer watch off the California coastline, said John Smith, who spent more than three decades with the agency that manages oil and gas production, the Bureau of Ocean Energy Management, and its predecessor, the Minerals Management Service.

But he added that the Amplify spill will test whether that oversight has been sufficient for something forecast decades ago.

In 1991, the federal Minerals Management Service predicted a 94% chance of a major oil spill off Southern California over 30 years. That estimate was released not long after a tanker spill blackened coastline in Huntington Beach and Newport Beach, and the pipeline break that created the slick off Ventura County.

The oil industry – the source of 150,000 jobs in California and hundreds of millions of state tax dollars over the years -- has long been an awkward partner with the environmentally minded state, a national leader in renewable energy that will ban the sale of new gasoline-powered passenger cars and trucks in 2035.

A moratorium was placed on new oil and gas leases in state waters after a devastating 1969 spill in Santa Barbara that helped spur the modern environmental movement. Now, U.S. Rep. Michelle Steel, an Orange County Republican, wants to temporarily ban cargo ships from anchoring or idling off the county’s coastline, calling the backlog of ships waiting to unload "an environmental and public health crisis."

Oil production in federal waters in the Pacific is down 90% since 1995, with no new drilling leases sold since the early 1980s. As crude reservoirs beneath California’s offshore platforms get depleted, that means thinner industry profits.

"It’s very difficult for them to make major investments in equipment and pipelines," Smith said.

Officials have identified a narrow crack in the Amplify pipeline as the source of the recent spill. What caused the break remains a mystery that might never be unraveled.

Coast Guard investigators suspect the line was hit by a multi-ton anchor from one of thousands of cargo ships that annually use the twin ports of Long Beach and Los Angeles. The pipe was bent and dragged as far as 105 feet (32 meters), its concrete sheath cracked, then possibly hit again by other anchors.

Safety inspections in 2015, 2017 and 2019 found anomalies in Amplify’s pipeline, including instances of metal loss and three dents that were previously repaired. But several experts who reviewed the reports said the metal loss -- which can be a sign of a pipe wall thinning as it corrodes with age -- was relatively minor. The dents were not in the same area as the spill.

"It’s one of the cleanest lines I’ve ever seen," said engineer Chris Fox with State Lands Commission, which oversees pipelines through state waters.

The inspection reports were obtained by The Associated Press through a public records request.

A grappling hook is unlikely the culprit in the Amplify case because the pipeline is much larger and heavier than the pipeline that failed after being hooked in 1991, said Smith, now a consultant for the oil and gas industry.

"That’s much harder to move. You need a much bigger impact to drag it 100 feet," he said.