Adele says divorce had her in 'five therapy sessions a day'

Adele opened up to the crowd of her Las Vegas residency, sharing her journey back to the stage and returning to therapy on Dec. 9, 2022. Credit: Francisco Leos-Santoyo via Storyful

LAS VEGAS - Adele opened up to the crowd at her Las Vegas residency over the weekend, speaking candidly about divorce and sharing about her journey back into therapy and live performances.

The British singer-songwriter was performing on Friday as part of her "Weekends with Adele" residency at Caesars Palace, which opened last month after being postponed nearly a year.

Video recorded by fan Francisco Leos-Santoyo shows Adele speaking to the crowd. Leos-Santoyo said she had just performed her 2011 hit song "Someone Like You."

"The last couple of weeks I have been highly emotional during that song and then I tend to cry, but this week I am not going to cry. I am going to stay strong," Adele told the crowd.

"I started having therapy again because I went a few years without having it," she continued. "I needed to start."

"Before obviously when I was having my divorce, I was basically having, like, five therapy sessions a day," she added, chuckling into the microphone.

Adele married Simon Konecki in 2018 and the couple separated in August 2019 with Adele filing for divorce the following month. Their divorce was finalized in 2021. The couple share son Angelo, who was born in 2012.

But somewhere along the way, she stopped those therapy sessions.

"I stopped holding myself accountable for my own behavior and the things I would say," the singer said. "Now I am doing it because I just want to make sure I'm topping myself up every week to make sure I can give you everything."

Watch: Fan startles Adele with face filter during Las Vegas concert: 'What have you done to my face?'

Adele told the crowd that most of her recent therapy sessions have been about performing live, which she says causes her anxiety.

"My whole therapy session this week was really interesting," Adele said. "It was about these shows and stuff like that. I always get so emotional. I love making music, but there is something about performing live that actually terrifies me and fills me with dread."

"That is why I am not a big touring artist," she continued. "I did it last time to prove I could do it. But this experience of being in a room this size, I think I might be a live artist for the rest of my life." 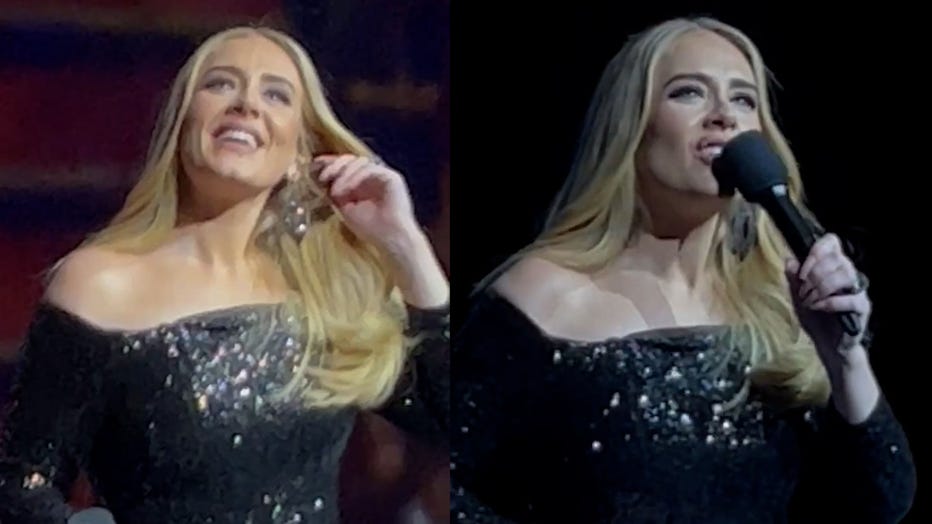 Adele is pictured in screengrabs from a video recorded on Dec. 9, 2022, in Las Vegas, Nevada. (Credit: Francisco Leos-Santoyo via Storyful)

In January, Adele postponed her 24-date Vegas residency just hours before it was set to start, citing delivery delays and coronavirus illness in her crew. At the time, the singer said in a teary Instagram video that she was "gutted" and promised to reschedule the shows.

At the time, many ticket holders had already traveled to and arrived in Vegas to attend the opening night, fueling more backlash for the last-minute cancellation.

"I have always put such a massive pressure on myself that everything has to be perfect, perfect," Adele said. "Obviously this show did have to be f------ perfect hence me delaying it again."

"I'm sorry," she added. "I am just a human actually and that is what having to cancel those shows did."

But finally being on the stage every weekend, Adele noted how much joy it has brought her.

"Having the human interaction every weekend, honestly, I am the happiest I've ever, ever, ever been."