A 90-year-old California man took out two ads in the Wall Street Journal, which set him back $10,000, to let AT&T’s CEO know about his abysmal internet service speed.

A 90-year-old California man took out two ads in the Wall Street Journal, which set him back more than $10,000, to let AT&T’s CEO know about his abysmal internet service speed.

It may seem like an extreme measure to some, but Aaron M. Epstein, 90, has been a customer of AT&T since the 1960s. Epstein claims that as AT&T has evolved throughout the years, the communications company is still lagging behind when it comes to faster internet services.

The longtime customer said that for the past 20 years he didn’t have any complaints, but starting five years ago, when streaming became widely available, the quality and speed of his AT&T service was more than subpar.

"For the last five years, as soon as they started introducing streaming like Roku and movies on TV, my internet service, although I was paying for 3.5 Mbps., sometimes was only up to 1.5 Mbps. So, watching a movie through Roku was slideshows," Epstein said.

Epstein, who lives in North Hollywood, said he decided to purchase both ads because he had been hounding the company about the estimated time of arrival for their fiber optics, which was heavily advertised in previous months.

While the company remained polite and "courteous," according to Epstein, the upgraded services did not seem to be coming to his area anytime soon, so he decided to make a last-ditch effort to not only bring faster internet options to himself, but to his community as well.

Epstein shelled out over $10,000 for two ads in the Wall Street Journal. One ad ran in Dallas, Texas where AT&T is headquartered and the other ran in Manhattan. Epstein hoped the New York City ad would encourage investors on Wall Street to pressure AT&T to get a move on.

"So, I put the ad in the paper and believe me, it’s money well spent," Epstein said, smiling. 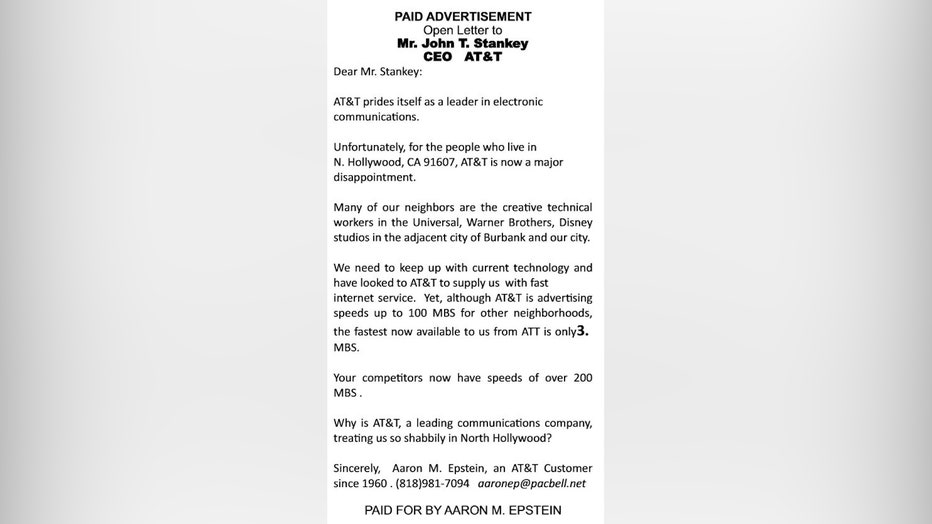 AT&T prides itself as a leader in electronic communications.

Unfortunately, for the people who live in N. Hollywood, CA 91607, AT&T is now a major disappointment.

Many of our neighbors are the creative technical workers in the Universal, Warner Brothers, Disney studios in the adjacent city of Burbank and our city.

We need to keep up with current technology and have looked to AT&T to supply us with fast internet service. Yet, although AT&T is advertising speeds up to 100 MBS for other neighborhoods, the fastest now available to us from ATT is only 3 MBS.

Your competitors now have speeds of over 200 MBS.

Why is AT&T a leading communications company, treating us so shabbily in North Hollywood?

Epstein said that after word of his ads got out, he got mixed reactions, ranging from some people calling him crazy to others relating to his frustrations.

"The one response I got the most kick out of was in the Jewish Daily Forward; referred to me as a 90-year-old ‘kvetch,’ which I don’t know if you know your Yiddish but ‘kvetch’ means crank," Epstein said with a chuckle.

Epstein said he doesn’t really mind what people think of his action, as long as it gets the job done.

The ads ran on Wednesday, Feb. 3 and that same morning, at around 11 a.m., Epstein received a call from a spokesperson who directly represents the president of AT&T.

"Turns out, AT&T has an office in Atlanta that is the office of the president and that’s where they refer big-time complaints," Epstein said.

The spokesperson took down all of Epstein’s information and said they would see what they could do to help move things along.

"So I am waiting patiently to see what they can do. She says, "We’ll try to get that happening for you sooner,‘" Epstein said, beaming.

RELATED: Super Bowl streaker arrested after being tackled by quarterback-turned-deputy

And while Epstein bankrolled the entire endeavor, he credited the news media for helping him get the attention he believed would invoke change.

"The press that contacted AT&T, that’s where the squeaks are heard... So I appreciate the press," he added.

Epstein has yet to see the familiar AT&T trucks moving into his neighborhood to start laying down fiber optic cables, but he is remaining optimistic.

According to AT&T’s fiber optics map, several areas in Los Angeles have received a green mark, symbolizing that those residents have access to faster internet speeds. Cities that are "in progress" are symbolized with a blue mark, according to the map legend.

Epstein’s neighborhood had not yet received an "in progress" mark as of Feb. 9, according to the website.

AT&T said in a statement that the company is continuing to enhance and invest in their wireless services and networks and have already spent $3.1 billion in the Los Angeles-area as of 2019, but did not comment on the progress on Epstein’s specific issue.