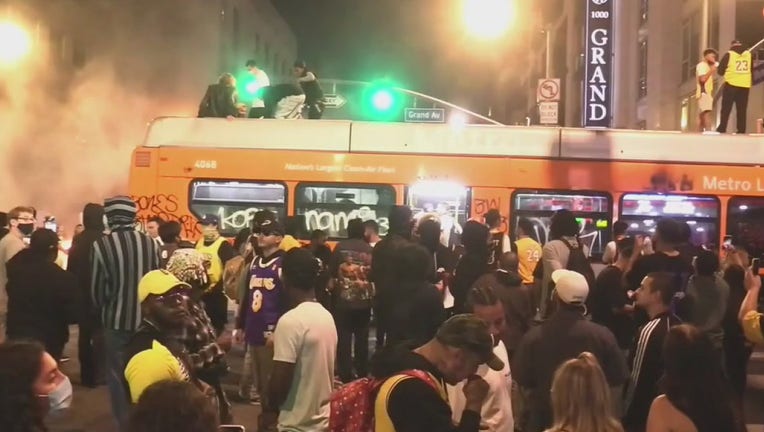 LOS ANGELES - Los Angeles erupted with joy Sunday night after the Lakers won the 2020 NBA Finals. However, the celebration outside Staples Center took a violent turn and resulted in 76 arrests, damage to more than 30 buildings and 8 officers injured, the Los Angeles Police Department said.

Destruction left behind by Lakers fans after winning the NBA Finals

Los Angeles erupted with joy Sunday night after the Lakers won the 2020 NBA Finals. However, the celebration outside Staples Center took a violent turn and resulted in 76 arrests, damage to more than 30 buildings and 8 officers injured.

"In total, 76 individuals were arrested for vandalism, assault on a police officer, and failure to disperse. Two of the members of the crowd were injured by less lethal munitions fired by our officers and they were taken to area hospitals. Eight officers were also injured and received medical treatment. More than 30 buildings and establishments were damaged by the crowd," the LAPD said.

Downtown Los Angeles residents who spoke to FOX 11 on Monday morning described the damage as disheartening.

“They call it a celebration but I’m wondering what could’ve happened if the Lakers had lost? This is tragic. The mayhem and destruction…it’s just sad,” a local resident told FOX 11.

On Sunday night, the Lakers won their first championship title in a decade in a season dedicated to honoring the legacy of NBA legend Kobe Bryant. The Lakers finished out the series in Game 6, defeating the Miami Heat 106-93.

Despite the mayor's call for everyone to celebrate at home. Thousands gathered at Staples Center after the Lakers won Sunday night.

Despite coronavirus guidelines and public officials warning against large gatherings, thousands of Laker fans took to the streets to celebrate outside Staples Center.

The celebration was initially described as having a “happy” atmosphere by FOX 11's Stu Mundel in SkyFOX, but things took a turn later in the evening.

Some fans even tagged and set fire to a Metro bus, officials said. 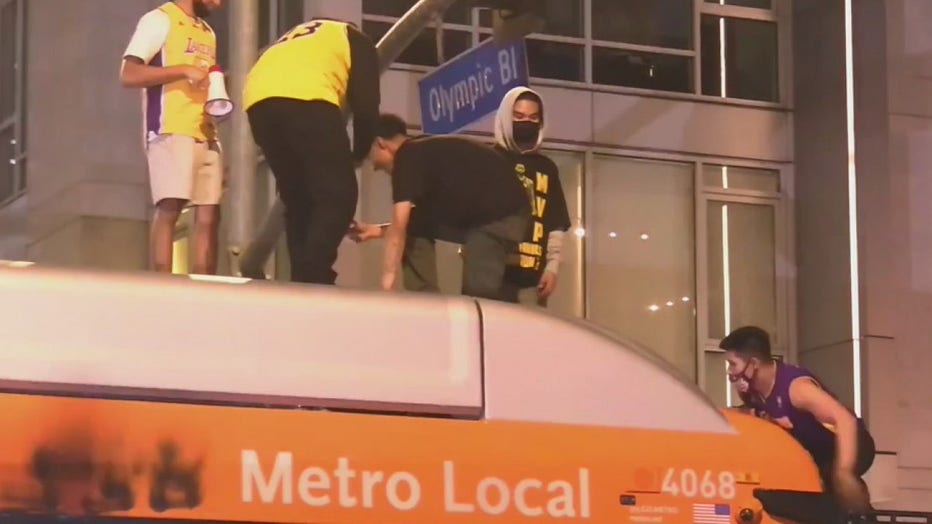 In addition, storefronts were smashed in and covered with graffiti and a Starbucks near the arena was ransacked and after it was broken into.

"I understand people want to celebrate and they have different forms of celebration but I wish it wasn’t so violent and so damaging. It’s unfortunate but hopefully, nobody was hurt but it is a financial burden," a resident told FOX 11’s Mario Ramirez.