Santa Barbara County Sheriff Bill Brown says the bodies of two men and two women have been recovered plus four other bodies found on the ocean floor near a boat that caught fire off of Santa Cruz Island on Monday.

Santa Barbara County Sheriff Bill Brown says the bodies of two men and two women have been recovered plus four other bodies found on the ocean floor near a boat that caught fire off of Santa Cruz Island on Monday.

Authorities have not released the identifications of any of the victims found at this time as they work to inform the victims' families of this Labor Day tragedy.

The Coast Guard launched several assets from its Los Angeles base in an attempt to search for and rescue passengers aboard a 75-foot commercial diving boat called "Conception" that burned and sank near the island, with multiple casualties feared among the 25 people still missing.

As the search continues for the missing 26 people families and friends of the victims continue to respond to the tragedy. Many gathering the Santa Barbara Harbour where the Conception was set to return

Five crew members "jumped off" the burning ship and were evacuated aboard a good Samaritan pleasure craft named Grape Escape, according to U.S. Coast Guard Capt. Monica Rochester, who said divers were still engaged in a search-and-rescue operation. Rochester said the crew was likely able to escape because they were awake and above deck when then fire broke out.

Petty Officer Mark Barney told FOX 11 News that a Good Samaritan vessel was nearby when the boat was engulfed in fire, and people on that boat were able to assist in rescuing five of those onboard.

A mayday call was heard at about 3:30 a.m. by Coast Guard Sector Los Angeles-Long Beach watchstanders of an engulfed 75-foot commercial diving vessel with 38 people aboard, according to a U.S. Coast Guard news statement.

Crews from the Coast Guard, Santa Barbara Fire Department and Ventura County Fire Department responded and were fighting the fire when the vessel began to sink 20 yards offshore in 64 feet of water at about 7:20 a.m., according to officials.

The Ventura County Fire Department reported that firefighters and paramedics responded to a boat fire off the north side of Santa Cruz Island and was helping the U.S. Coast Guard in support of rescue operations for people aboard a dive boat. A Coast Guard spokeswoman says officials have set up a temporary 3,000-foot ceiling flight restriction while recovery efforts are underway.

Worried loved ones were coming to the U.S. Coast Guard Station in Channel Islands searching for information.

This is audio from Coast Guard radio traffic where we hear a mayday call from the boat Conception.

Rochester said the crew was likely able to escape because they were awake and above deck when then fire broke out.

The ship was named Conception. Built in 1981 in Long Beach, it was docked in Santa Barbara. According to the website California Diving News, it has a maximum capacity of 46 people, with 13 double bunks and 20 single bunks. 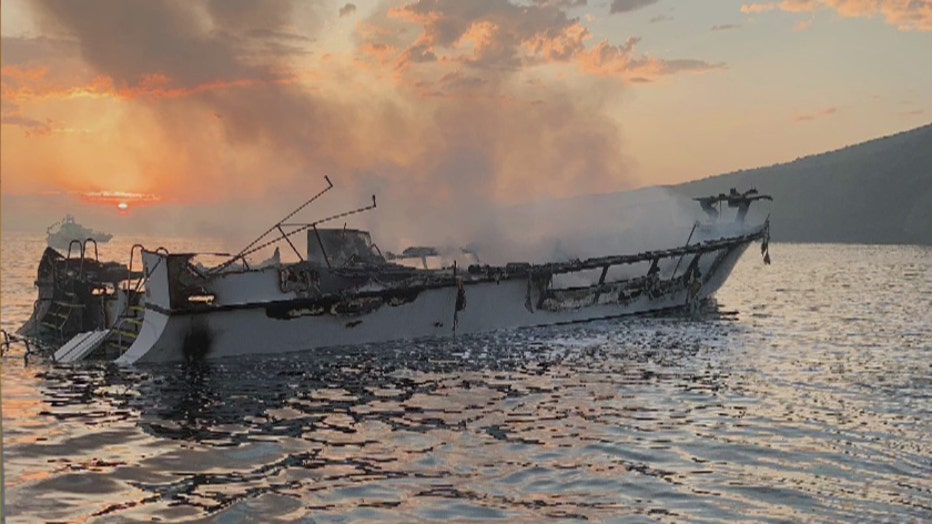 The Los Angeles County Sheriff's Department offered its support Monday morning, tweeting: "LASD is at the ready to assist in helping find the 34 unaccounted-for people in this devastating boat fire. We hope for the best and brace for the worst. We share in your sorrow."

Family members looking for information about their loved ones are encouraged to call 833-688-5551. A family assistance center has been established at the Earl Warren Showgrounds in Santa Barbara.

Sheriff Brown says the boat was hosting a 3-day dive trip that left the Santa Barbara Harbor on Aug. 31 at 4 a.m. and was due back at the harbor on Monday, Sept. 2.

FOX 11's Oscar Flores and CNS contributed to this report.